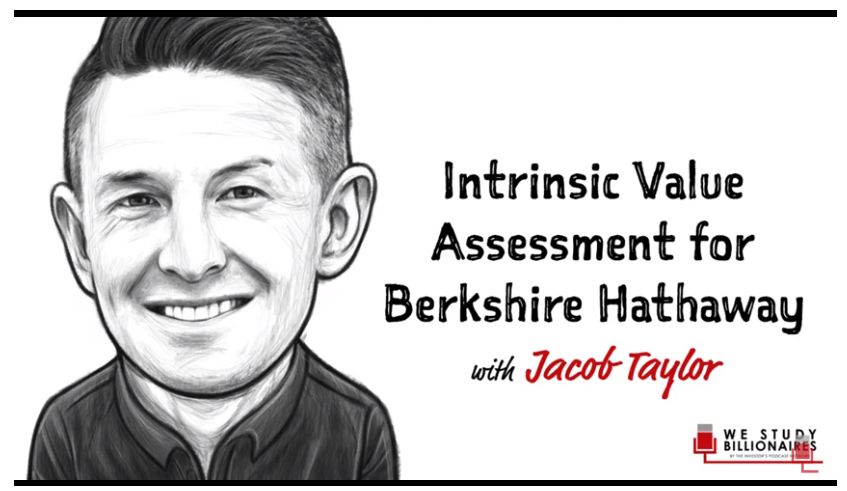 Here’s a great interview with Value After Hours Podcast co-host Jake Taylor on The Investors Podcast discussing his intrinsic valuation of Berkshire Hathaway. Here’s an excerpt from the interview:

Well I think there are different ways of doing it. I tend to be more on the simplistic side of my investment stuff. Like if I can’t write it on the back of an envelope or on a short piece of paper in a few sentences, it’s probably too complicated for me.

To take a swing at Berkshire, the first pass to look at it… and this will sound a little bit glib because the answer is going to be kind of silly but if you imagine Berkshire as a bond that yielded 10%. I think that’s a reasonable actual approximation. Because their return on equity has been 10% for quite a while and it’s likely to be around 10% for a long time just based on the projects that they’re putting money into. Thinking specifically regulatory yield of BNSF and BH energy.

Today’s rates right now I mean it’s like approaching it goes towards infinity right. I mean that’s why I said this is sort of like the glib answer. It’s a ridiculously high number which i think is more a reflection of today’s rates being in my mind kind of ridiculous and not so much a reflection of Berkshire.

So let’s go to a more real answer then. Sum of the parts is a way, a very popular way of analyzing Berkshire which is basically just take all the different little business lines, add them up, and come up with some kind of a number.

So my back of the envelope math for some of the parts is you know let’s call BH energy worth about 50 billion. The railroad worth about a hundred billion, the MSR, the manufacturing service retail is call it 150 billion. Insurance call that a 30 billion, and then an investment portfolio 370 billion ish. You add all those up and it totals up to about 700 billion. Which implies about a $280 per share for the B shares. Quite a bit north of where we are right now.

So another way of looking at it… the business would be let’s just do a simple what has Berkshire typically traded around as far as price-to-book goes and the answer there is roughly let’s call it 1.75 times price to book value. Today’s book value let’s call it 425 billion, that gets us to a 740 billion dollar range of potential valuation. Okay, that’s in the ballpark of our sum of the parts. That makes sense.

All of these things are all just triangulation data points. Like any one is not better than the other but if they’re all kind of telling you the same story then maybe you’re onto something. That’s how I think about this and then maybe the last one would be what is called like a two pronged approach. That’s basically like add up all of the investments and then try to put some multiple on the actual earning businesses and then add those together. What does that number tell you?

In my rough calculations, let’s call it 260 billion for equity securities, another 130 ish billion for cash that gives us a three hundred ninety billion dollar four-prong one, and then prong two will take the twenty four billion dollars of operating earnings and multiply that by ten. That gives us two hundred forty billion. Add those two numbers together and you end up with six hundred and thirty billion as another mark.

So all of them in the 700 ish billion dollar valuation range.

2 Comments on “Jake Taylor: What Is The Intrinsic Value Of Berkshire Hathaway”