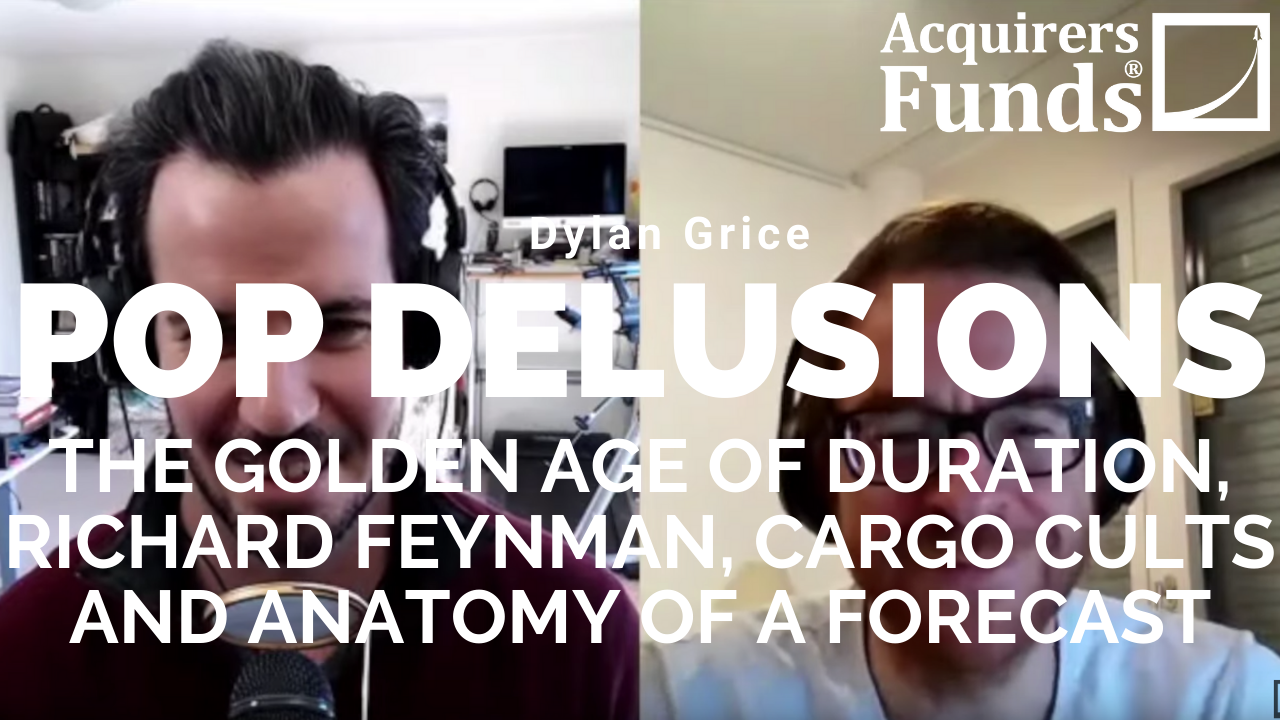 During his recent interview with Tobias, Dylan Grice, co-founder of Calderwood Capital Research, and author of the Popular Delusion Reports, discussed the anatomy of a forecast error. Here’s an excerpt from the interview:

Tobias Carlisle:
That’s a nice segue into one of the articles that I liked in your more recent popular delusions was discussing the anatomy of a forecast error. Can you perhaps describe for folks what that article was about, and what the conclusion that we can draw from it is?

Dylan Grice:
Well, were to start. You go back to years when i was… and like a lot of people I really didn’t like QE, hated QE, and didn’t really like the precedent that it had set. I kind of felt that this was going to end badly, that this was a mistake, and that they shouldn’t be doing it. I really really hated QE and I really don’t hate… I really hated it. I hated that it was so loved by… economists at all. Support gather already. So really not a fan of the discipline. As I said, I think that they’re very, very pro-scientist. You’ve got these kind of economics here running around. To my way of thinking at the time… by the way, these guys are just blowing up the… system. Right?

Dylan Grice:
The whole thing was largely caused by their incompetence, and them really not knowing what they were doing… 2006 said that there was no housing bubble. Couldn’t be a housing bubble because house prices had never fallen. It has never happened before, therefore, it could never happen. So this is just like kind of logical error. One-on-one, right? I just couldn’t believe that these guys got away with it.

Dylan Grice:
What’s going to happen… for example, in the ’70s is an inflation problem. Right? Hyper inflation… it effected the investment landscape meaningfully. So I kind of thought that this is where we were going, and I kind of said… Actually, it was 2010. In terms of… we will see the white of inflation dies. We will see a… inflation problem. So this is a very kind of form prevention that I need. Whereas I said, you’ll always see an inflation problem. Here we are 10 years later, and I think that… break even and inflation rates are like 50 basis points below where they were when I made my connection. So I guess that just set off a kind of… Also, kind of speaking to some friends of mine that agree with me and who also thought that inflation was clearly going to be the next big issue. So I said, “What did I get wrong? Why did I get that one so wrong?” That piece was really me trying to pick where I went wrong.

Dylan Grice:
I think that the main… where I went wrong, which is something that a lot of people do, but I guess there were three things really. One, I just fell in love with the idea. I fell in love with the theory. I really enjoy learning about hyper inflation. I really enjoy… and the closer I looked the more obvious the patterns became, and I just enjoyed that process, right? I liked my own theory. In academia, they have some phrase for it. It’s something like theories are kind of like toothbrushes. You’ve got to have your own one and everyone only uses their own one, and everyone loves their own one. So I kind of fell into that trap without realizing it. Another trap I fell into was that… And this is a big one, and this is something that I’m much more wary of today.

Dylan Grice:
But I really felt that… I would write… these guys are… and all their doing, and I managed to still be kind of struck a chord, and people just love this. Especially coming from a kind of investment bank. So at the time I think it was quite a kind of unusual thing for a bank to say. So it kind of went viral and I went home, and I had a following of people who loved to hear me… on this stuff. Before I knew it, I can’t… I didn’t realize this until years later, but I once actually played to the crowd. And I started too… Again, this is why, I don’t want to mention any names, but I’ve seen it, you’ve seen it, investors when they go public with a thesis, it’s a disaster. Keep it to yourself. Shut up.

Dylan Grice:
It just becomes so much more difficult to change your view when you’ve got a bunch of followers who are always following you because of that view. I think actually I really kind of… Interesting story. So tough example of… with a friend of mine… Henry who used to… 2008 crash, made a lot of money out of it, and did really, really well for his investors and was seen as the… guy. He was all over TV, he was all over Blue book, he was on very high-profile news shows in the UK, and some of footage of those shows kind of went kind of viral because he was… it was wonderful.

Dylan Grice:
It was like, finally someone with a brain is on our side and he’s actually calling out these… for what they are. So far so good, but he was now seen as that… guy. When he turned bullish a few years later… He said, “What’s the point in you?”… you were a… little hedge. So this is the danger. You have to be very careful what followers you get. Right? If you get followers who will follow you because of this particular view, then that then impairs your ability to update your view as facts come out. I think if you’re investing and you’re trying to get a lot of right then it’s really just a continuous process of updating and you’re not really doing yourself any favors. This was another thing that happened to me.

Dylan Grice:
The main one that I really should have seen because I see it often. Another argument I see another discourse… is very famous. No quality too of arguing, which is… Forget the argument, just attack the person. And you see it. When you do see it you kind of think, “Ah, did you just do that? That’s a terrible thing. You just lost the argument. You’re attacking the person.” Donald Trump does it all the time. I think it’s just a very low quality thing to do and again, I didn’t realize it at the time but I was doing that. In particular, I was allowing my dislike of the… and particularly guys like… all these kind of, I just think they’re phonies. I don’t really think they know as much as they say they do. But these guys were worried about deflation. So I kind of just felt… then obviously I’m going to worry about inflation, right?

Dylan Grice:
Again, it gets a few laughs from your audience, but that’s no way to update your… That’s not an argument. That’s just dumb. This is another mistake that I knew and they were the main categories of errors.

Tobias Carlisle:
It’s a very honest assessment because I think you could have said, “Well, inflation isn’t counted properly by CPI statistics. It’s probably understated… adjustments. A sort of nonsense,” and then you also could have said, “Is that Austrian view that inflation doesn’t necessarily run through the CPI, it could run through asset processes?” There’s a pretty strong argument that we’ve seen some pretty material inflation and asset process.

Dylan Grice:
That’s true. That’s absolutely true. I really do believe that, and I think that you can even measure it. I think you can kind of measure it to what extent assent prices are all the way inflated. So in terms of whether or not CPI is great for measuring… maybe there’s some truth to that, but I’m not to sure on that argument. I’ve seen estimates. I can’t remember the guy’s name. He said that inflation actually runs at 10%.

Dylan Grice:
Yeah, I just have difficulty believing that actually the economy is contracted by… If inflation is being 10% then I think… must have been mind of minus five, or six, or something. That’s not what i see. That’s just a question mark. I don’t know. I don’t know the right way to measure it. I feel like the point is, inflation is an estimate. It’s ultimately a judgment. Right? It’s not actually measurable and when you try and build them asset prices and… you just find that there’s a whole kind of worms. Conceptually it’s not measurable and this is the Austrian preceptor. This is dumb. It’s absolutely dumb to try and measure something as complex as… because all these prices going up and all these prices going down… economy, but an economy wide increase in prices it’s very… As increasing the money supply will trigger some kind of change and will to prices somewhere because it must do when people start spending money to buy increase. Therefore, that’s inflation. Whether it shows up in the GPI or sort of, we don’t really know. That’s the kind of Austrian perspective and that’s the whole folly of central bank targeting, this made up number in the first place. It’s just bloody stupid, right?

Dylan Grice:
But that’s what they do, and to go back to your point… said all of those things and I believe them, but that wasn’t my connection. My connection was that we were going to see GPI inflation, right? We would see it within 10 years. So there’s no point trying to wiggle out of it because you could also say, “Well, it just hasn’t happened yet.” Then that’s not a forecast. If you say, “What’s the weather going to be like tomorrow.” You say, “Tomorrow.” Right? You’re specifying a time. A forecast has to have some kind of time dimension. You can’t just keep saying, “I’m just waiting for it to happen. I’m definitely right.” The time is it’s always going to happen tomorrow. It’s going to happen the day after. So I don’t think that you should wriggle out of things that way either. My forecast was very, very specific. It was … inflation and it was within 10 years, and I think I even said that it would be more than 4%. So… and I think it’s very… It was a very constructive thing for me personally to kind of rub my own nose in that and say, “Right, what did I get wrong? How can I not do that one again?”