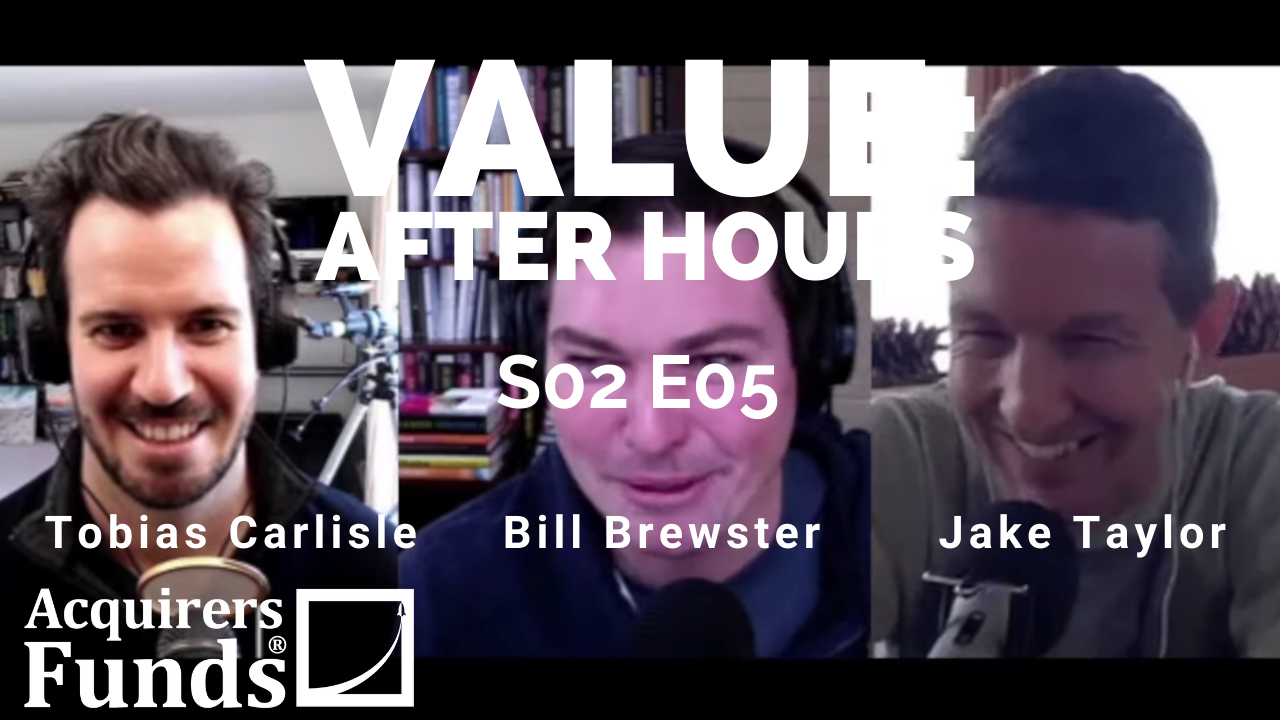 In this week’s episode of the VALUE: After Hours Podcast, Taylor, Brewster, and Carlisle discussed the return of risk arbitrage. Here’s an excerpt from the episode:

Tobias Carlisle: Shall we kick on to the next topic? Jake, do you want to give us yours?

Jake Taylor: Yeah. I recently read Kate Welling and Mario Gabelli’s book called Merger Masters, and it was basically profiles of a bunch of guys who have done… or doing… merger arbitrage and risk arbitrage into the ’70s, ’80s, ’90s, even into today. What I found really interesting was that… you don’t hear about that much all these days. Nobody’s really talking much risk arbitrage, at least in my circles, and a lot of that has to do with low interest rates; apparently, that kind of kills that business, because they only earn a couple points above whatever the interest rate is, typically. And the smart ones, then… they move in cycles, and they’ll do risk arbitrage during boom times, and they’ll move into bankruptcy… special situation… after the bust.

Jake Taylor: But what I found… I wonder if we shouldn’t be asking ourselves if there might not be a renaissance of this on the horizon at some point, because it seems out of favor today. And we’ve talked before about different flavors of value, and each of them sort of having their particular time to shine. This might be one that you want to do a little work on ahead of time to be ready for when that season comes again.

Jake Taylor: So what do you guys think about that? Do you want to learn more about it to be ready?

Bill Brewster: We had the mailbag question on FCAU just last weekend, right? Fitbit looks like it’s trading at a pretty discount. I haven’t done the work.

Bill Brewster: I think merger arbitrage is a really interesting strategy. I’ve been fortunate enough to get to know Mario a little bit, so I got to listen to Kate talk about that book. One, I think the strategy is super interesting. Two, the stories in that book are super interesting. And somebody has asked her, “Who is the best or scariest person in that book,” and without hesitating, she was like, “By far, Paul Singer.” That guy does not lose and the people walking through that office are not interested in losing, but it is a terrifying place to work, for, I guess, the right reasons. But that was sort of an interesting tidbit.

Bill Brewster: Yeah, I think it makes sense. I’ve long thought merger arbitrage is a good strategy. It’s not one that I think I’m prepared to execute on my won.

Tobias Carlisle: I’ve done lots of merger arbitrage. I like it as a strategy, but as you say, it’s one of those things that… there are just long periods of time where it’s not a good strategy because the spread is not wide enough. The thing that is different between now and the ’80s is it was hard to track this stuff down in the ’80s. You needed to know how to see the filings, find the stuff, understand what the deal was; now, Google merger arbitrage, there are websites that give you all of the dozen or 20 deals that are on right now with the spread, and they give you what the IRR is… it just calculated, and the sites are out there for free.

Tobias Carlisle: So, it’s a lot less work than it used to be, and I think, as a result, the spreads have closed. You’ve got to get smarter. Having said that, I’ve had some merger arbitrages that were like 100 percent, and I’m not talking about IRR. I’m talking about that were, literally, like 50 percent of the bid, and at 50 percent of the bid, I’m prepared to put in a point or two just to see what happens, because you can get a good return and probably not lose much if the bid doesn’t go through.

Tobias Carlisle: So, I like it as a strategy. I’ve done it in a previous life, and I watch it regularly, but it’s tight now.

Bill Brewster: I played Monsanto. That worked out pretty well. That turned out to be a fairly decent one.

Bill Brewster: I would want to do it where I was somewhat comfortable with the underlying if something busted; like, the Spring/T-Mobile one doesn’t really interest me because I really don’t want anything to do with Sprint if it doesn’t go through.

Tobias Carlisle: What if you long short?

Bill Brewster: Yeah, you could do it that way.

Tobias Carlisle: You’d get both sides. You’d get a little hedge; that way, if it busts and they both fall apart…

Tobias Carlisle: I did it when all of the healthcare mergers were… like Humana… long Humana. That deal ultimately didn’t go through, but in a funny way… the deal took so long. Initially, there was a concern about the deals that were being done to move the head office overseas, to get out of the tax jurisdiction, and the Obama administration put a stop to that. But that deal wasn’t being done for that reason, but it blew open because all of the… I guess all of the arbitrages are in all the same positions, and they’ve got to conserve capital where they can.

Tobias Carlisle: And then it got blown apart because there was a DOJ antitrust, but United was so much bigger, and there was another deal going on that… at the time, that if that deal went through, they’d been number three biggest, and if the deal didn’t go through, they would have been second maybe, still behind United. Took the deal so long to go through that United sprinted ahead of the other four that were still in a deal, and so, when the deal busted, the stock actually went up, because it was held back by the deal! So, that’s a sort of dream arbitrage, and I had a lot of that in my PA and in the fund.

Bill Brewster: Well, you put yourself in the right ponds and good things can happen, even if it’s for the wrong reason, right?

Bill Brewster: Yeah, well, that tweet that I sent out a year ago just caught fire again today, where I said-

Tobias Carlisle: It’s a good one.

Bill Brewster: The traditional value guys understand the left tail mitigating risk. Traditional growth understands that the right tail can be a lot longer than, I think, value gives it credit for. The marriage of the two concepts is nirvana, but it’s not easy.

Tobias Carlisle: If you can figure that out, yeah… 100 percent. It’s a good insight.

Bill Brewster: And I think what you were just talking about is a good example of how traditional value, I think, sort of wins, in that… there is some price that a lot of bad outcomes are priced in, and that’s where you bet. And then, a lot of things can go…

Bill Brewster: Yeah, and if not three… there is a lot of precision that these… I think prices require, and I think a lot of people are saying, “Well, I’ll just hold longer, and it’s a great business, and over the long term, that’s going to work.” We’ll see. I mean, in 10 years, we’ll have the conversation, and maybe people will say, “See? I told you!” But it gives me an uneasy feeling.

Tobias Carlisle: Yeah, that’s where I am, but that’s what being deep value is… just missing out on all the parties.

Jake Taylor: …after the next.