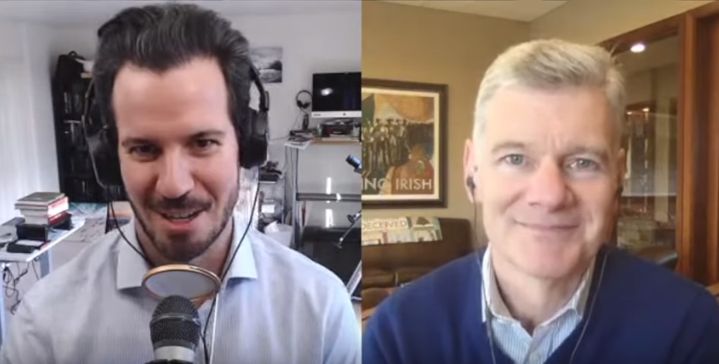 During his recent interview with Tobias, Mark Yusko of Morgan Creek Capital Management discusses how he turned $100,000 into $20 Million in one trade. Here’s an excerpt from the interview:

Tobias Carlisle: Let me take you back a little bit. So you start at UNC Chapel Hill 1998, you have this value bias, but you’re going into a really tough time for value investors, so how did you manage through that period?

Mark Yusko: Such a great question, I love talking about this period because you’re right when I got there everything that I believed in my core was going against me. Everything, because this was the midcycle rebound from 95, and things were starting to get really frothy. And then I get there in … which they were worried about Y2K pumped half-a-trillion, back when half-a-trillion was a lot of money, half-a-trillion dollars into the economy to try to combat Y2K. And we had this year long explosion from kind of October 98 to October 99. And basically everything that I believed in from a value investor perspective was just out the window. Now I will give myself a little bit of credit because I was willing to let some winners run, and we had allocated money to Nicholas Applegate, great growth firm, to a firm called Oxley in Boston, great international growth firm. And they were crushing it. I mean the fourth quarter of 99, our portfolio, our domestic equity portfolio, was up 40 percent, 4-0.

Mark Yusko: Three months, right? And we got way out of whack with our investment policies. So February board meeting and I go into the board and I say, “All right guys we need to rebalance. Things are looking really pricey,” this was kind of right before the March super peak and I was starting to feel a little nervous. And we had made a ton of money in venture capital, I mean a ton of money. And started to get distributions and I’ll tell you about on ein a little bit. But I said, “We got to rebalance.” And my board chair says, “Mark you’re out of your mind, these are our best managers. We’re not going to take money from them.” I said, “But our policy says we have to go from 37 back to 30 because we’re overweight.” And he says, “Well we’re the board, and you’re the one that made up this policy.

Mark Yusko: In fact, we don’t like the word policy, we want you to change that word to guideline.” I’m like, “Come on.” He’s like, “No I’m serious.” So they made me change it to guideline, I couldn’t sell anything. And so the market starts to roll over in March, I come back in May and they’re like, “Okay fine, you can go to the top end of the range but these are our best managers, no more.” By September they’re like, “Get this shit out of here, and oh by the way change that word back to policy.” And so back to disciplined investment advisors, that discipline of over riding the emotion of hey these are our best managers, hey trees are going to grow to the sky.

Mark Yusko: And where I really got my conviction on why we needed to get hedged and why we transitioned from basically long only at the end of 99 to 60, 6-0 percent, in hedge funds by 2002, which I’ll talk about in a second, was because of this one incident with a distribution. So we had made an investment in this venture capital fund in Boston. They invested in a bunch of companies, but one of the companies they did was Art Technology Group. Art Technology was literally the consulting company that helped companies change their names to .com. And as soon as you changed your name to .com, it went up a lot. So this stock went public, went up 200x.

Mark Yusko: So our cost was 50 cents, stock was trading at 100. And we get distributed shares after the lock up, and I call the guy, the chair of the venture capital fund and said, “What should I do?” He says, “Well Mark I’m an insider so I can’t really talk, but I can say two things. Revenue’s six million, market cap six billion.” And I was silent for a second, he says, “Mark are you still there?” I’m like, “Yeah, I got to go. I got to go. Sell, sell, sell, somebody sell this.” And here’s the crazy thing, stock went to four, it went down 96%, at four it still would have been an eight bagger.

Tobias Carlisle: Still would have been a great return.

Mark Yusko: Venture capital investment, right, but we got out at 100, so we made 200 times our money, which I haven’t done very many times in my life. It wasn’t a lot of money.

Tobias Carlisle: You only need a couple of those.

Mark Yusko: Yeah, we turned 100,000 into 20 million for the university, so that was good. But it made me realize how quickly we need to change. So I go to that September board meeting and say, “We need to put a bunch of money in hedge funds,” and the chancellor says, “Well that’s going to be a problem.” And I said, “Well why’s that?” He says, “Well we banned hedge funds a few years ago.” “What do you mean you banned them?” “Well there’s this nasty article about Julian in Business Week and they banned hedge funds.” I said, “All right fine, we’ll have no hedge funds. We’ll have long short equity, opportunistic equity, absolute return, and enhanced fixed income.” And he says, “That’s just nomenclature, right?” And I said, “Yep.” He said, “Good as long as we’re clear.”

Mark Yusko: So we did put 60% of the fund in hedge funds, and that was to get protective. And so from 2000 to 2002 market fell 53% peak to trough, and remember that was when we had the greenspan put, so the market couldn’t go down… had no sells. 100% buy ratings, no one thought you could ever lose money. If you held those four stocks for the last 20 years your return is negative. Microsoft’s done well, the other three are still down. And Howard Marks has a great line about this, one of the great value investors of all time has a great line, he says, “There’s no investment good enough that you can’t screw up by paying too much.” And the inverse is true, “There’s no investment bad enough that you can’t fix with a low price.” There is a price for everything.

Mark Yusko: And so we got hedged, we were able to be flat from 2000 to 2002, which I’m not going to break my arm patting myself on the back for not making money, but we didn’t lose any money. And one of my favorite again value guys, Roy Neuberger, founder of the Neuberger and Berman. He went in the office every day until he was 94, it’s one of my goals, and managed his own money until he was 101, second goal, and he finally passed at 105. So pretty good life, and said there were only three rules to managing money. Rule number one, don’t lose money, rule number two, don’t lose money, rule number three, don’t forget the first two rules.