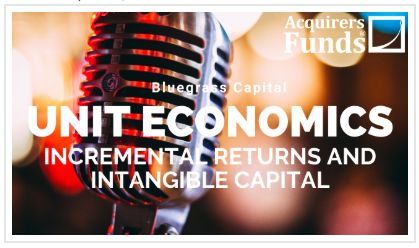 During his recent interview with Tobias, the man behind the pseudonymous Twitter account, Bluegrass Capital discusses how he screens for potential opportunities, using other smart investors 13F’s. Here’s an excerpt from the interview:

Tobias Carlisle: How do you find the companies that you like to invest in? What’s the search process?

Bluegrass: I think this goes back to the concept of maybe shortcuts for finding things, a cheat sheet. The best way for me is talking to somebody like you, for example, like you pre-screened somebody and you’re like, yeah, this person is competent and we figured out What our mutual interests are, and we decided, hey, we both really like, like Walmart for some reason or Costco, and you have a frame of reference and you just talk to each other over time and you share notes about the retail industry or whatever. Just having your own network of other analysts, and when that analysts that you’ve already pre-screened as being really competent and good just comes back to you and they say, Hey, you need to look at XYZ business, that’s by far the highest value way for me to spend time working on a company or looking at one.

Bluegrass: Outside of that, I keep a long queue of 10K’s to read and it’s just basically a ever evolving list. I’ve got some 10K’s on there that have probably been on the list for six months and I keep putting names in front of them and never get to them, and I may never read some of them because I just don’t really have interest in them. But it’s companies that already are on the top of the list and it’s their main competitors or potential new competitors. And it’s … Yeah, I’ll stop there. That’s the general summary.

Tobias Carlisle: I think that’s a common way for discretionary investors to do that. A lot of guys who I’ve spoken to who are more discretionary tend to do a lot of speaking to other people. I sometimes think I just wonder if is there a risk to everybody seems to hold the same portfolios? Another Twitter account, Barbarian Capital has a joke that he calls generic value partners and then you go through the list and it’s the same five or six stocks that everybody holds.

Bluegrass: No, actually you built on something to poke fun at myself but also not forgot about this. So probably the best screening tools I use other than having another smart person come to me and say, hey, look at this business is, if you looked at my portfolio, and I’m getting back to the generic value partners or generic growth partners, which I’m certainly guilty of, I’m definitely not afraid to own commonly own names.

There’s a lot of similar qualitative characteristics to the businesses I own, if you group them together. One is there’s a lot of owner operators. Another one is a group of investors who I emulate, and there’s 13 F filings when they file their public portfolios, that’s a rich source of screening for me. And I publish my quarterly compound or watch list, which is basically just taking 20 other investors that are really smart, they’ve done this for a long time, that are focused on the same qualities as me, and just aggregating their portfolios.

Bluegrass: And the thought is there, I know most of the names that would be on that list, but once or twice a year there’s two or three new names that Come on because there’s a new IPO, or one company merged with another, or something just changed in the business and there’s a couple I don’t recognize. So, if some other investors that are smarter than me have started buying it, that’s a clue for me to look.

Bluegrass: Oh, I should have had it pulled up.

Tobias Carlisle: Just a handful, you don’t have to name them all.

Bluegrass: Yeah. I mean, so Berkshire, Merkel, Tom Gaynor, Fund Smith, SPO advisor was on there but I think they shut down. Alter rock, Sequoia, Rain Cuniff and …