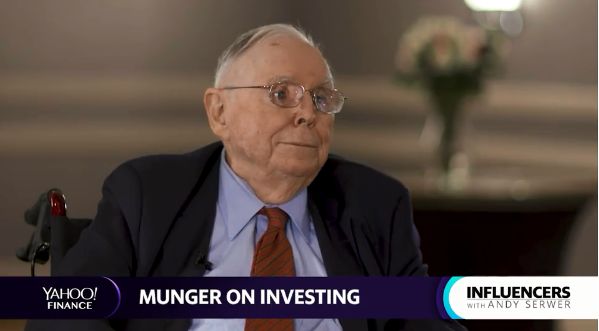 Here’s a great recent interview with Charles Munger and Andy Serwer at Yahoo Finance – Influencers. There’s one passage in particular in which Munger admits to being ashamed that he missed out on Google, and has the following to say about loss-making Unicorn IPO’s:

“Well, there are a whole lot of things I don’t think about. And one of them is companies that are losing $2 or $3 billion a year and going public. It’s not my scene.”

ANDY SERWER: I want to ask you a little bit about some Silicon Valley stuff. I mean, you said yesterday you were ashamed of missing on Google.

CHARLIE MUNGER: Yeah, I am. We could see, if we had looked carefully at our own companies, that their advertising was working way better than other advertising. Just we weren’t paying enough attention.

ANDY SERWER: So was it too late?

ANDY SERWER: Well, we’ll leave that aside. But, you know, you look at these tech investments, so they’re Apple, now Amazon. Did you know about the Amazon purchase? Were you involved in that decision?

CHARLIE MUNGER: No, of course not. I have never owned a share of Amazon. I am a huge admirer of Bezos. I think he’s been sort of like Lee Kuan Yew. He’s a leader that’s all by himself. He’s been just a perfectly amazing human leader. But it’s always been too complicated and uncertain for my particular temperament.

CHARLIE MUNGER: And I find other things to do that’ll work fine.

ANDY SERWER: Someone was telling me the other day that they thought that you could actually sort of think of Apple and Amazon not as technology companies so much, but as big-branded growth businesses, which would be something that would be appealing to you.

CHARLIE MUNGER: Oh, I think they’re both brands and technologies. And it’s hard to separate the effect of one from the other.

ANDY SERWER: OK. And as far as what’s going on in Silicon Valley right now with IPOs, unicorns going public and not having any profitability or any prospect of profitability in the near term, what do you think of that situation?

CHARLIE MUNGER: Well, there are a whole lot of things I don’t think about. And one of them is companies that are losing $2 or $3 billion a year and going public. It’s not my scene.

CHARLIE MUNGER: Well, I have to be interested when they’re that important and sweep the world and change practice. But I don’t have to invest in everything I’m interested in. I’m looking for things where I think I can predict what’s going to happen with a high degree of accuracy. And I have no feeling that I have the ability to do that with Uber.