According to the Cambridge dictionary a snake oil salesman is:

someone who deceives people in order to get money from them:
He was dubbed a “modern day snake oil salesman” after he ripped off thousands of internet customers.

So why is it that so many investors are continually happy to part with millions of dollars to the latest snake oil salesman guaranteeing 20%+ returns. The answer(s) are quite simple:

1. A lot of investors want to take shortcuts when it comes to getting outsized returns and they’ll do anything to get the latest ‘silver bullet’ investment opportunity.

But, as Charlie Munger warned, The Investing World Is Just A Morass Of Wrong Incentives, Crazy Reporting, And A Fair Amount Of Delusion.

One of my favorite articles on the subject of investment managers spruiking outsized returns was written by James Montier who said:

“Modern day investment management resembles, sadly, another old profession – and I’m not thinking of the oldest one, although there may be parallels there as well. Rather, I’m thinking of ancient alchemy with its near constant promises to turn lead into gold, just as investment managers repeatedly offer to transform low returns into high returns.”

Montier provides a great example of investors chasing the holy grail with his Sorry Tale of Sir Roger. Here’s an excerpt from that article:

The Sorry Tale of Sir Roger

I think one can gain some insight into the reason people constantly fall for such stories by examining the sorry tale of Sir Roger Tichborne. Like many a well-heeled young Victorian Englishman, Sir Roger went gallivanting around South America. Eventually he boarded the Bella in Brazil. Four days later, wreckage of the Bella was recovered, and all souls were declared lost. Lady Tichborne (Sir Roger’s mother) refused to believe that he had perished.

Encouraged in her beliefs by a medium who kept telling her that she couldn’t find Sir Roger in the afterlife, Lady Tichborne posted regular advertisements in newspapers around the world offering a reward for information about her lost son.

Some 10 years after Sir Roger’s disappearance, Lady Tichborne received word from an Australian solicitor claiming that her son was alive and well and living in Wagga Wagga, working as a butcher. Lady Tichborne was ecstatic, and sent funds to cover her “son’s” repatriation to the U.K. Upon his arrival, Lady Tichborne declared the man to be her son and instigated a £1000 stipend.

Not everyone was quite so convinced that the new arrival was in fact Sir Roger (see Exhibit 1). 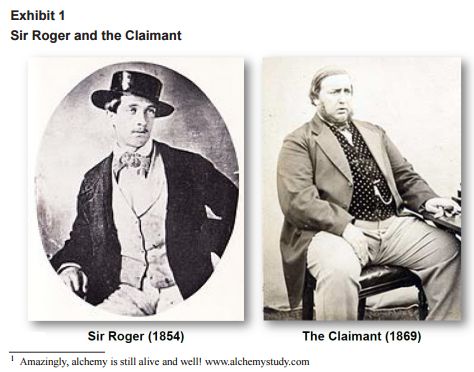 Now it is perfectly possible for a man’s weight to change over the years (trust me, I know). However, Sir Roger spoke both Greek and Latin, the claimant spoke neither. Sir Roger had a working knowledge of chemistry, the new arrival couldn’t tell his sodium chloride from his calcium carbonate.

It is, of course, possible to forget things over time; perhaps a bump on the head during the wrecking of the Bella resulted in memory loss. However, it is rare that tattoos disappear of their own accord, even in the extreme sun of Australia. Sir Roger had some, yet these had mysteriously disappeared from the new arrival. It is even rarer that a person’s eyes change colour. Sir Roger had blue eyes, the new arrival had brown eyes! It was only after Lady Tichborne’s death that the rest of the family exposed the Australian import as an imposter.

The moral of this story? Never underestimate the willingness of people to believe in the most outlandish of things if it suits them. Just in case you think this example has no relevance for the world of investing, consider the returns of the mystery fund shown in Exhibit 2. 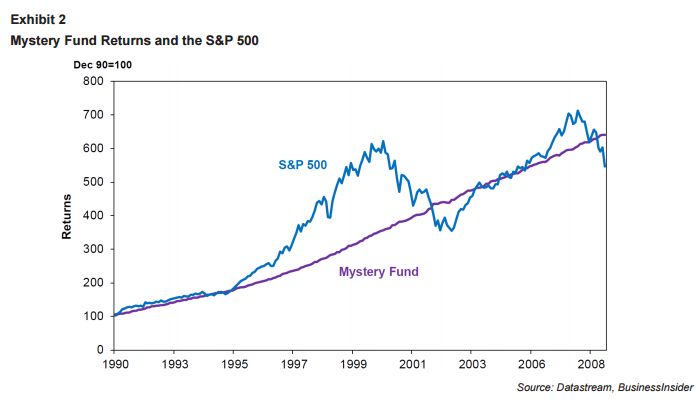 Investors are always looking for the Holy Grail of investing, a strategy that generates good returns and doesn’t have major drawdowns – something akin to the mystery fund. (As one of my colleagues put it, investors often behave like Lady Tichborne except in their adverts they disclose the details of their desires, i.e., smooth returns, high Sharpe Ratio, etc., and so the “claimants” [aka investment managers] are happy to create such illusions.)

Unfortunately, the exhibit presents none other than the fund returns of one Bernard Madoff! The obvious lesson from the Madoff affair is that if something looks too good to be true it probably is. Yet, just like Lady Tichborne, investors appear vulnerable to seeing exactly what they would like to believe.

The rest of this paper is about innovation in our industry. Now, innovation sounds like it should be exciting but, sadly, I share the perspective of J.K. Galbraith and Paul Volcker when it comes to innovation. Galbraith observed,

“The world of finance hails the invention of the wheel over and over again, often in a slightly more unstable version.”

Paul Volcker has opined that the ATM is the only useful financial innovation in the last 30 years. The rest of this paper tries to examine some of the “innovations” put forward by investment managers, and concludes (spoiler alert) they are nothing more than old snake oil in new bottles.

You can read the entire paper here.