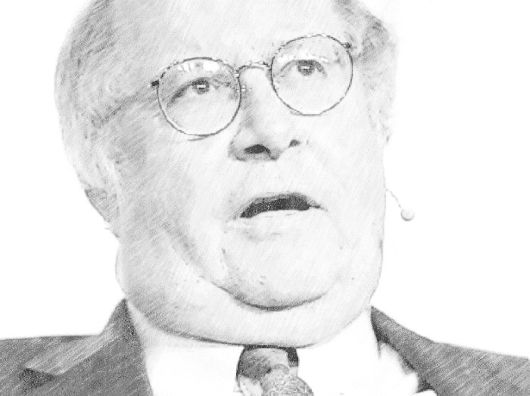 One of our favorite investors here at The Acquirer’s Multiple – Stock Screener is Bill Miller.

Miller is the founder of Miller Value Partners, and currently serves as the Chairman and Chief Investment Officer, and the Portfolio Manager for Opportunity Equity and Income Opportunity Strategy. Prior to Miller Value Partners, Bill and his partner, Ernie Kiehne, founded Legg Mason Capital Management and served as portfolio managers of the Legg Mason Capital Management Value Trust from its inception in 1982. Miller took over as sole manager in December 1990 and served in this role for the next 20 years.

As of December 2016 the Miller Value Partners had $1.87 Billion in assets under management (AUM).

Miller recently released his quarterly summary which included a piece on the importance of investing differently than everyone else if you want to be a successful long-term value investor. He says, “We really couldn’t care less if the immediate quarter was a little weaker, or stronger, than expected.”, when asked about the short-term future of Apple. Miller’s focus is clearly on the longer-term. It’s a must read article for all investors.

Opportunity Equity ended the quarter ahead, but it was a close call. We lagged in January, had a spectacular February then gave back some ground in March. We entered March nicely ahead of the benchmark for the year, but fell behind as the market lost ground. We made up all the lost ground plus some in the last few days of the quarter.

It doesn’t make much sense to squint at Opportunity’s (or the market’s) micro-movements as I’ve described. The only reason it’s worth writing about is to highlight two things: 1.) it’s not surprising for returns and excess returns to be delivered during narrow periods of time, which is why market-timing is so problematic, and 2.) our investment in RH (RH), formerly Restoration Hardware, helped propel the strategy’s advance at quarter end. The names that drove our return in the quarter tell an interesting story.

Judging from inbound questions in the quarter, people were most interested in Valeant Pharmaceuticals International (VRX) and Intrexon Corp (XON), our second and third biggest detractors from performance. Endo International (ENDP), which hurt performance the most, didn’t garner as much interest, which is most likely due to the fact that people view it as the less-maligned kid sister of Valeant. Together, these companies cost the strategy 281 basis points.

Gains in our two best performers, the Apple Jan 2018 $100 calls and RH, more than offset these losses since they generated 680bps of return. If you add in our third best performer (for a three name apples-to-apples comparison), Platform Specialty Products (PAH), the combined contribution grows to 817bps. Interestingly, we got few inquiries into these names. We did get many questions on Apple Inc. (AAPL) in the first half of last year when it was a laggard rather than a leader. RH was a new name in the fourth quarter of last year so it hasn’t yet gotten much attention. Both names illustrate why we think there are opportunities to generate solid returns in this market and why we think the current losers have the potential to become the biggest winners in the future.

Early last year, we had a call with a prospective investor who had many questions about Apple. “Don’t you follow their suppliers and know there’s channel weakness for the quarter?” We responded that while we did know that, it wasn’t a driver, or even a factor, in our investment decision. We really couldn’t care less if the immediate quarter was a little weaker, or stronger, than expected. Our positive view on Apple revolved around our view that Apple is a consumer brand, which implies much more durable earnings power than was implied in the stock.

When the stock hit $90 last May, it was trading under 7x what it was expected to earn the next fiscal year excluding net cash. In other words, the market was pricing it to shrink in perpetuity. We thought this was unlikely and the stock was a bargain. Apple released its new iPhone 7 in the fall, which reviewers panned as not innovative, yet sales exceeded nearly all estimates, which we think confirms our view of the brand’s power.

The stock is up more than $55 (over 60%) since that time, a whopping $288B increase in market value. After the big move up, it has been upgraded by many sell-side firms and every analyst has increased the price target. Buffett recently got involved in the stock adding to the enthusiasm. We like it less at higher prices than lower ones, but at 14x next year’s expected earnings, it is still cheaper than other consumer brands like Nike (22x) and Coca-Cola (22x).

To get different results than others, one needs to invest differently. Since the financial crisis, investors show significant risk aversion and seek low volatility. Additionally, they want immediate gratification, which is why we like to refer to this market as a “just in time” market. We do the opposite in both regards. We look for opportunities to make a significant amount of money and we are patient about when those returns will be earned. While we don’t aim to lose money on new investments, we understand that may happen in the course of positioning for long-term outperformance. When Apple traded at such a large discount to our estimate of intrinsic value, we bought more even though we did not know when it would rebound.

RH defies that typical trend and worked almost immediately for us. RH sells luxury furniture and home décor.  Check out Just DIY Decor for online home decor ideas.It came public in 2012 at $24 after receiving buyout bids from numerous parties, including Berkshire Hathaway. It proceeded to perform well for 13 consecutive quarters as the stock made new highs, ultimately peaking at $106 in November 2015. The company made a number of changes in 2016 that hurt results. It suffered from inventory issues with its newly launched Modern line requiring costly customer accommodations, it delayed its major marketing book from spring to fall, it switched to a membership model from a more promotional one and it didn’t have the same level of Holiday merchandise.

Each of these items hurt results. However, it continued opening its larger format stores, which increase sales at least double from its smaller format stores. No one seemed to believe when the company insisted that many of the things that hurt earnings were temporary. It backed these words up with actions when it initiated a share repurchase that equated to ~30% of the market cap at the time, citing its undervalued shares. We believe RH is building the first scale high-end furniture company. We think the shares remain undervalued with potential earnings power of $10 per share over the long-term vs. a $46 current stock price.

Valeant recently hired a new CFO, Paul Herendeen, who’s very highly regarded. We, too, have been extremely impressed with him. He is logical and rational and understands how to create value. He said when hired that he viewed guidance as a “commitment.” We took that to mean guidance would likely be quite conservative. When the company issued guidance in February the stock sold off sharply, as the outlook was below analysts’ consensus. Our expectation is that the guidance was what Amazon typically calls “appropriately conservative.”

Also pressuring the stock was Bill Ackman’s sale of Pershing Square’s entire 27 million share position at a price of just over $11, which not surprisingly garnered a lot of attention. Less remarked upon, but more significant in our opinion, were the purchases of stock by long time Valeant investor Value Act Partners, and by CFO Herendeen. Both were made late in the quarter. Value Act has a board seat and if anyone has insight into how the quarter is going it is the CFO. We think these purchases are consistent with our view that the quarterly guidance has a reasonable shot at being exceeded. Valeant indicated last year that 2017 was likely to be a down year but that they expected to resume growth in 2018. If the market begins to believe the worst is over, we think the stock could have the same kind of rapid price recovery we saw with RH, which nearly doubled in 60 days.

On a longer term basis, Valeant has some very high quality businesses, including Bausch & Lomb and Salix. The recent debt refinancing gives it three years to execute a turnaround plan. People remain concerned about the overleveraged balance sheet. Paying down debt is a top priority for the company. We remain confident in its ability to do so, and there are scenarios where leverage can quickly fall to 5x net debt to EBITDA. We continue to think Valeant is likely worth multiples of where the current stock trades.

Endo mainly sells generic drugs (along with some branded ones). The entire industry has been pressured by a more competitive landscape and falling prices. Endo also has a significant amount of debt, along with some legal liabilities for vaginal mesh that are eating up most of the current cash flow. Its likely generic price declines moderate as we move into 2018 and the mesh liability begins to taper off. Once these pressures abate, Endo should be able to generate significant free cash flow. Consensus estimates call for roughly $700M in 2018 free cash flow excluding mesh payments equating to a free cash flow yield of 29% at current prices. Endo was the worst performer in the S&P 500 last year and would be the second worst this year if it weren’t removed from the index in January. That level of underperformance is often associated with a washout stock price with little downside and significant upside should things improve.

New management at Endo is highly regarded. Their top priority is paying down some debt. We think they could sell some assets to accomplish this more quickly than the market expects. This would make the company a more attractive acquisition target. Endo’s largest shareholder is private equity firm TPG. We think ENDP could be sold in a few years, or earlier if the price is right. While we are not counting on it being taken out, it is yet another way to win. Either way, we easily get values for Endo that are at least double the current market price.

Intrexon is the last of our underperformers that generates significant interest. Intrexon has always had a large retail shareholder base and it feels like many have tired of the story. We expect Intrexon to remain volatile given its projects are so early stage. Intrexon has a variety of different businesses all involving synthetic biology (engineering biologic solutions). We view Intrexon as a portfolio of real options, some of which will work and some of which won’t. We haven’t changed our long-term view on Intrexon and we remain believers that there’s significant potential upside here. In the near-term, the company is moving closer to monetizing their non-browning apple (Arctic Apple) and their anti-Zika mosquito, which could help improve sentiment. Remarkably, Intrexon’s short interest is more than twice that of Valeant, setting up the potential for quick move higher on any good news. RH likewise had a very high short interest, which no doubt was partly behind the magnitude of its move.

Overall, we continue to find great opportunities for patient, long-term, value investors. We appreciate your support and will work hard to grow your capital.