Good news for value investors it seems with what looks like a return to value investing in Europe.

I’ve just finished reading an article by Mike Bird at the Wall Street Journal which indicates a shift back to value investing strategies in the Eurozone.

Following is an excerpt from the article by Mike Bird at the Wall Street Journal:

European investors are showing tentative signs of shifting back to a long unloved strategy: value investing.

In the eurozone, value investors, which pick stocks that appear undervalued relative to financial metrics, have had years of poor performance.

But during the second half of this year, that trend has shifted rapidly with changes in markets, with commodities performing well, growth perking up and bond yields rising.

The MSCI EMU Value index—which includes stocks picked through criteria like their low price-to-earnings and price-to-book ratios—has underperformed the broader MSCI EMU index by nearly 25% over the last 10 years. 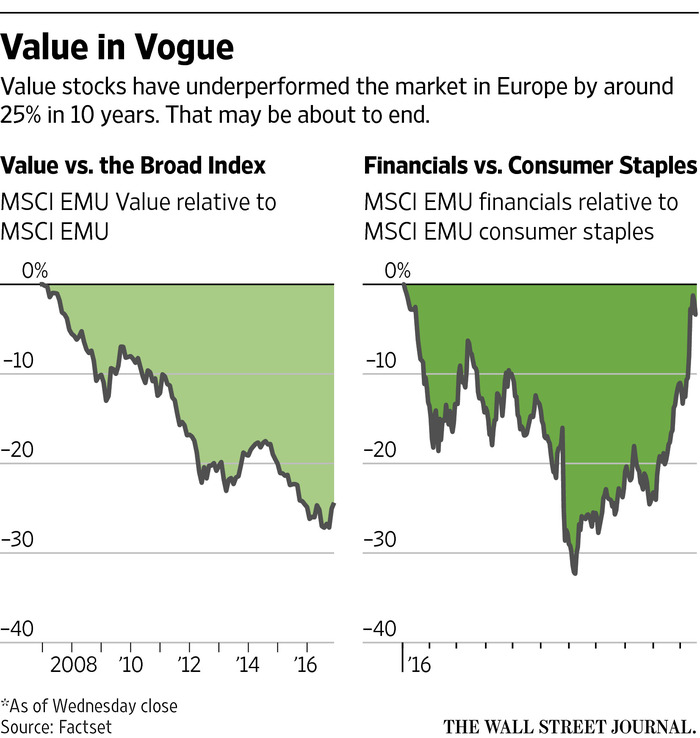 Some analysts believe that the recent rotation into Europe’s most beaten-down stocks is the start of a trend.

“A value trap goes to being a value trade when the risks reduce,” said Jonathan Stubbs,global equity strategist at Citi. “We have stabilizing or rising commodity prices, a climb in inflation expectations, and a pickup in bond yields.”

That pickup in bond yields is particularly important, because rates lead to higher profits for banks, and this sector is the largest slice of the value universe.

Value investing has a positive correlation to rising yields, a rarity in equity markets, analysts say.

Rising yields and inflation, which is being spurred partly by increasing expectations of fiscal stimulus, are likely to continue.

Banks have a price-to-book ratio of around 0.7, which means that the sector is worth less than the net value of its assets. Its dividend yield is far higher than corporate spreads, suggesting bank equity is undervalued relative to bank bonds, since investors can get a far higher return by buying shares than bonds.

Banks have been the worst-performing of the 285 sectors that Citi has tracked over the last 10 years.

“You’ve got a very cheap sector that’s incredibly underweight,” said James Sym, fund manager at Schroders. “Valuations have hit a point where they offer a very attractive risk to reward.”

Other investors seem to be coming round, and are shifting rapidly toward an overweight position in European banks—meaning they aim to hold a larger share of them than a benchmark portfolio would suggest.

Bank of America Merrill Lynch’s fund manager survey showed a 30 percentage point swing from underweight to overweight ratings between its October and November polls, the largest shift of any equity sector.

Automotive and insurance stocks also look cheap on valuation metrics. “Relative to the market, the price-to-earnings multiple on both sectors remains near the lowest levels seen in nearly two decades,” Deutsche Bank said in a research note.

Europe’s value stocks have been hit hard by low profits. Now that could reverse.

Since 2009, U.S. earnings per share have risen by 77% more than those in Europe, where profits have been practically flat, according to Karen Olney, equity strategist at UBS.

Several factors have weighed on earnings: the drop in emerging market growth, commodity prices and the banking sector’s troubles.

In recent years defensive and low-volatility stocks like consumer staples have prospered, with investors placing a premium on steady performances and dividends.

After its recent rally, the MSCI EMU financials index is down just 3.4% against eurozone consumer staples stocks. In July, financials were down more than 30% for the year relative to staples.

As investors smell bargains in value stocks, staples look increasingly expensive. The sector currently has a price-to-book ratio of 3.88, close to a five-year high.

Still, value stocks still have a long way to go to make up their lost ground.

Many investors remain cautious over the trading style, which has never made a meaningful recovery from the financial and euro sovereign debt crises. In both 2009 and 2013, periods when it seemed the eurozone was recovering, value outperformed the market for a matter of months before resuming their long grind lower.

You can read the original article by Mike Bird at the Wall Street Journal here.

One Comment on “Value Investing Regains Favor in Europe (WSJ)”