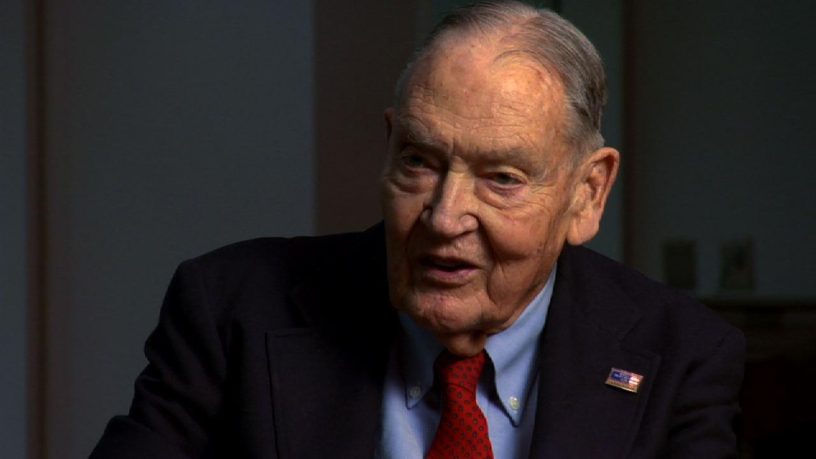 John ‘Jack’ Bogle is the founder and retired CEO of The Vanguard Group. He was also named one of the “world’s 100 most powerful and influential people”, by Time magazine in 2004.

Bogle’s innovative idea was creating the world’s first index mutual fund in 1975. Bogle’s idea was that instead of beating the index and charging high costs, the index fund would mimic the index performance over the long run. Thus, achieving higher returns with lower costs than actively managed funds.

Bogle is also the author of the best selling book, The Little Book of Common Sense Investing.

On the weekend I read a fantastic piece on Bogle in the Wall Street Journal titled Jack Bogle: The Undisputed Champion of the Long Run.

Vanguard’s founder on 40 years of indexing success and how to invest in today’s ‘extremely risky world.’

Four decades ago, a mutual-fund industry graybeard warned him that he would “destroy the industry.” Mr. Bogle’s plan was to create a new mutual-fund company owned not by the founding entrepreneur and his partners but by the shareholders of the funds themselves.

This would keep overhead low for investors, as would a second part of his plan: an index fund that would mimic the performance of the overall stock market rather than pay genius managers to guess which stocks might go up or down.

Thus was born the Vanguard 500 Index Fund, which this week celebrated its 40th birthday. Vanguard holds, on behalf of its 20 million investor-clients, more than $3 trillion in mostly passively managed, index-style investments.

Not even Warren Buffett has minted more millionaires than Jack Bogle has—and he did so not by helping them get lucky, but by teaching them how to earn the market’s long-run, average return without paying big fees to Wall Street.

At age 87, Mr. Bogle is marking his 65th year as an industry leader. His relationship with the Vanguard colossus he created has rewarmed after a period of hard feelings. And that prediction of four decades ago is coming true. The mutual-fund industry is slowly liquidating itself—except for Vanguard. Mr. Bogle happily supplies the numbers: During the 12 months that ended May 31, “the fund industry took in $87 billion . . . of which $224 billion came into Vanguard.” In other words, “in the aggregate, our competitors experienced capital outflows of $137 billion.”

Ouch. And the trend has been running this way for at least a decade. According to Bank of America, $600 billion in investor cash has exited actively managed funds since the 2008 crash, while some $961 billion has flowed into index-style investments of the sort pioneered by Vanguard.

Hyperventilating on Wall Street is only to be expected. Bill Ackman, the hedge-fund manager, recently alluded to an “index bubble.” In a widely noted research report a couple of weeks ago, analysts at Sanford Bernstein even alleged that passive investing was “worse than Marxism.”

We’ll get to what all that means (not much). We’re meeting at the Bogle clan’s Adirondack retreat, where we first spoke 10 years ago. This time Mr. Bogle has some hard news for investors. The basic appeal of index funds—their ability to deliver the market return without shifting an arm and leg to Wall Street’s army of helpers—will only become more important given the decade of depressed returns he sees ahead.

Don’t imagine a revisitation of the ’80s or ’90s, when stocks returned 18% a year and investors, after the industry’s rake-off, imagined they “had the greatest manager in the world” because they got 14%. Those planning on a comfy retirement or putting a kid through college will have to save more, work to keep costs low, and—above all—stick to the plan.

“When the climate really gets bad, I’m not some statue out there. But when I get knots in my stomach, I say to myself, ‘Reread your books,’ ” he says. Mr. Bogle has written numerous advice books on investing, including 2007’s “The Little Book of Common Sense Investing,” which remains a perennial Amazon best seller—and all of them emphasize not trying to outguess the markets.

That said, Mr. Bogle finds today’s stock scene puzzling. Shares are highly priced in historical terms; earnings and economic growth he expects to disappoint for at least the next decade (he sees no point in trying to forecast further). And yet he advises investors to stay invested and weather the storm: “If we’re going to have lower returns, well, the worst thing you can do is reach for more yield. You just have to save more.”

Mr. Bogle relies on a forecasting model he published 25 years ago, which tells him that investors over the next decade, thanks largely to a reversion to the mean in valuations, will be lucky to clear 2% annually after costs. Yuck.

Then why invest at all? Maybe it would be better to sell and stick the cash in a bank or a mattress. “I know of no better way to guarantee you’ll have nothing at the end of the trail,” he responds. “So we know we have to invest. And there’s no better way to invest than a diversified list of stocks and bonds at very low cost.”

Mr. Bogle’s own portfolio consists of 50% stocks and 50% bonds, the latter tilted toward short- and medium-term. Keep an eagle eye on costs, he says, in a world where pre-cost returns may be as low as 3% or 4%. Inattentive investors can expect to lose as much as 70% of their profits to “hidden” fund management costs in addition to the “expense ratios” touted in mutual-fund prospectuses. (These hidden costs include things like sales load, transaction costs, idle cash and inefficient taxes.)

Mr. Bogle, to the surprise of many, is not fantastically wealthy. Vanguard was born as a “mutual” mutual-fund company, with the management company owned by the funds’ investors. So there was never any billion-dollar payday from a public stock offering or the creation of a closely-held private company of the sort enjoyed by Fidelity’s founding Johnson family.

He also knows the heartache of having just about everything he has saved tied up in volatile, sometimes irrational markets, especially now. “We’re in a difficult place,” he says. “We live in an extremely risky world—probably more risky than I can recall.”

Confidence is especially hard to come by given the antics of central banks, which many say is the only reason for today’s relatively good stock market performance. Nor does he like his options in the U.S. presidential election: “My friends, they want to vote for Hillary, a lot of them. I don’t want to but I’m going to.”

Investing, he says, always is “an act of trust—in the ability of civilization and the U.S. to continue to flourish; in the ability of corporations to continue, through efficiency and entrepreneurship and innovation, to provide substantial returns.” But nothing, not even American greatness, is guaranteed, he adds.

If an investor wants to put 5% of his portfolio into gold as a hedge against inflation or political chaos—surprise—Mr. Bogle doesn’t have a problem with that. He also emphasizes his long-held but contrarian wisdom that it’s unnecessary for U.S. investors to invest outside the U.S. Domestically listed companies already get a high percentage of their sales and profits abroad. He adds, “When you invest overseas, you get into currency changes, you get into governments that are much less stable than this one at the moment.”

The last bit is said with a chuckle, a reference to what he considers the disturbing wild card of a potential President Trump. Still, he adds: “I’d rather stick with the risks that I think I understand.”

Mr. Bogle suspects he’s probably the longest-surviving heart transplant recipient who received his heart after age 65. Back in 1996, his doctor told him the operation would be a simple one: “cut, cut, cut, sew, sew, sew.” “You forgot to mention, ‘pray, pray, pray,’ ” Mr. Bogle responded.

He knows nothing of the donor but happened once to be sharing a stage with a liver recipient who got his organ in Atlantic City the same day Mr. Bogle received his heart in Philadelphia—and who had been confidentially informed that his nameless benefactor was a 26-year-old male.

The transplant rejuvenated what had been a very sick, debilitated mutual-fund chief, but Vanguard’s board and Mr. Bogle’s anointed successor decided nonetheless to enforce the company’s mandatory retirement age of 70. Mr. Bogle professes not to understand the hard feelings that persisted for a decade, but relations are much warmer now. He’s feted on the company’s suburban Philadelphia campus. Teams of Vanguard workers seek him out for briefings. Mr. Bogle tells me a couple of senior managers have been detailed to hear out any ideas or criticisms he cares to offer.

Mr. Bogle is no idolater of the management art, not even his own. “I think a lot about leadership and I’ve come to the conclusion, by and large, it’s overrated, and that includes you know who.”

Companies operate mostly on “momentum,” he says, plus dedication of the rank and file. Vanguard has thrived on the low-cost momentum he imparted 40 years ago. But Mr. Bogle points out that he pursued the idea only after authoring a disastrous merger that nearly brought down Vanguard’s predecessor company. “My incentive in starting Vanguard, I’m very blunt about this, it was my means of preserving my career. That’s a very selfish thing.”

But he’s also equally realistic on the bad merger decision, which involved bringing in some go-go managers from Boston to run the then-illustrious but dowdy Wellington Fund during the 1960s stock boom. “The reality of life is, if you have a bagel shop and everybody is pouring into the doughnut shop across the street, if you want to stay in business, you start selling doughnuts. So I did.”

Wall Street continues to live partly off doughnuts, of course. Hence the outcry against indexing from Mr. Ackman and Sanford Bernstein. One complaint is that passive, index-style investing distorts stock prices and the allocation of capital across the economy.

Mr. Bogle laughs this off. Suppose half of all investor money went into index funds—today it’s less than a quarter—it would mean only that half the money theoretically available for trading would not be trading. So what? Prices would still be made, second-by-second, by active investors chasing the latest bit of information or analysis, as accurately or inaccurately as ever.

Yes, says Mr. Bogle, an absurdity would be a market that consisted 100% of indexing. “It would be chaos. There would be no current valuations.” But it would never happen, not least because smart big-money investors—and Mr. Bogle believes there are some; he names Cliff Asness of AQR Capital Management—would quickly pounce on any opportunity created by mispricing of valuable securities.

Nonetheless, the growth of indexing is obviously unwelcome writing on the wall for Wall Street professionals and Vanguard’s profit-making competitors like Fidelity, which have never been able to give heart and soul to low-churn indexing because indexing doesn’t generate large fees for executives and shareholders of management companies.

“The active management business will still be around but it will shrink,” Mr. Bogle predicts. “In five years, Fidelity will be sold.” He adds: “I could characterize [the potential buyer] but I don’t think that would be good for my public image.”

From our earlier conversation, it’s clear he means what he calls the financial buccaneer type, an entrepreneur more interested in milking what’s left of the active-management-fee gravy train than in providing low-cost competition for Vanguard—which means Vanguard’s best days as guardian of America’s nest egg may still lie ahead.