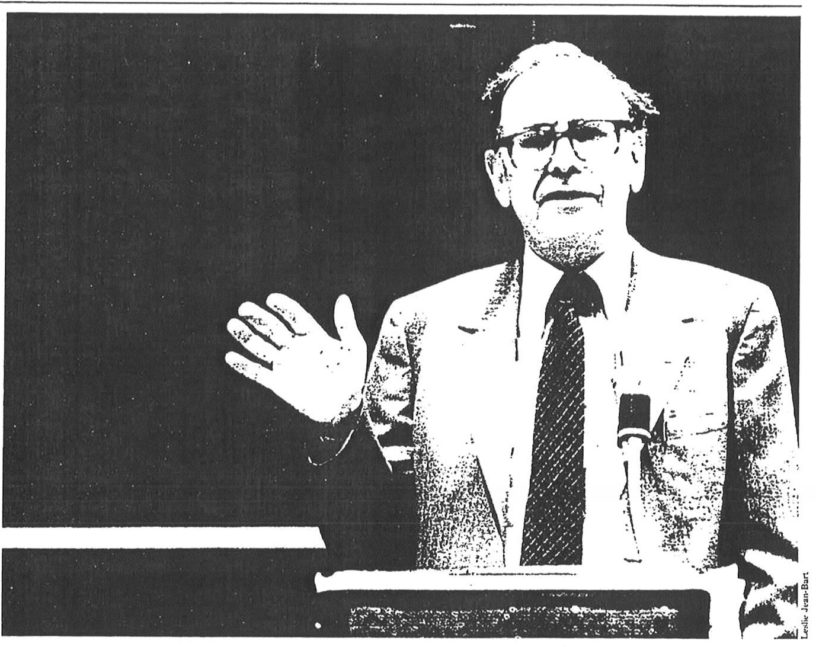 This is Part 3, in the 3 part series The Superinvestors of Graham-and-Doddsville – (Freshly Transcribed 2016).

Table 7 is the record of Stan Perimeter. Stan was a liberal arts major at the University of Michigan who was a partner in the advertising agency of Bozell & Jacobs. We happened to be in the same building in Omaha. In 1965 he figured out I had a better business than he did, so he left advertising. Again, it took five minutes for Stan to embrace the value approach.

Table 8 and Table 9 are the records of two pension funds I’ve been involved in. They are not selected from dozens of pension funds with which I have had involvement; they are the only two I have influenced. In both cases I have steered them toward value-oriented managers. Very, very few pension funds are managed from a value standpoint.

Table 8 is the Washington Post Company’s Pension Fund. It was a large bank some years ago, and I suggested that they would do well to select managers who had a value orientation. As you can see, overall they have been in the top percentile ever since they made the change.

The Post told the managers to keep at least 25 percent of these funds in bonds, which would not have been necessarily the choice of these managers. So, I’ve included the bond performance simply to illustrate that this group has no particular expertise about bonds. They wouldn’t have said they did.

Even with this drag of 25 percent of their fund in an area that was not their game, they were in the top percentile of fund management. The Washington Post experience does not cover a terribly long period but it does represent many investment decisions by three managers who were not identified retroactively.

Table 9 is the record of the FMC Corporation fund. I don’t manage a dime of it myself but I did, in 1974, influence their decision to select value-oriented man agers. Prior to that time they had selected managers much the same way as most larger companies. They now rank number one in the Becker survey of pension funds for their size over the period of time subsequent to this “conversion” to the value approach.

Last year they had eight equity managers of any duration beyond a year. Seven of them had a cumulative record better than the S&P. All eight had a better record last year than the S&P.

The net difference now between a median performance and the actual performance of the FMC fund over this period is $243 million. FMC attributes this to the mindset given to them about the selection of managers. Those managers are not the managers I would necessarily select but they all have the common denominator of selecting securities based on value.

So these are nine records of “coin-flippers” from Graham-and-Doddsville. I haven’t selected them with hindsight from among thousands. It’s not like I am reciting to you the names of a bunch of lottery winners—people I had never heard of before they won the lottery.

I selected these men years ago based upon their framework for investment decision—making. I knew what they had been taught and additionally, I had some personal knowledge of their intellect, character and temperament. It’s very important to understand that this group has assumed far less risk than average; note their record in years when the general market was weak.

While they differ greatly in style, these investors are, mentally, always buying the business. not buying the stock. A few of them sometimes buy whole businesses, far more often they simply buy small pieces of businesses. Their attitude, whether buying all or a tiny piece of a business, is the same. Some of them hold portfolios with dozens of stocks: others concentrate on a handful. But all exploit the difference between the market price of a business and its intrinsic value.

I’m convinced that there is much inefficiency in the market. These Graham-and-Doddsville investors have successfully exploited gaps between price and value. When the price of a stock can be influenced by a “herd” on Wall Street with prices set at the margin by the most emotional person. or the greediest person, or the most depressed person, it is hard to argue that the market always prices rationally. In fact, market prices are frequently nonsensical.

I would like to say one important thing about risk and reward. Sometimes risk and reward are correlated in a positive fashion. If someone were to say to me, “I have here a six-shooter and I have slipped one cartridge into it.

Why don’t you just spin it and pull it once? If you survive, I will give you $1 million.” I would decline—perhaps stating that $1 million is not enough. Then he might offer me $5 million to pull the trigger twice—now that would be a positive correlation between risk and reward!

One quick example: The Washington Post Company in 1973 was selling for $80 million in the market. At the time, that day, you could have sold the assets to any one of ten buyers for not less than $400 million, probably appreciably more.

The company owned the Post. Newsweek, plus several television stations in major markets. Those same properties are worth $2 billion now so the person who would have paid $400 million would not have been crazy. Now, if the stock had declined even further to a price that made the valuation $40 million instead of $80 million, its beta would have been greater. And to people who think beta measures risk, the cheaper price would have made it look riskier.

This is truly Alice in Wonderland. I have never been able to figure out why it’s riskier to buy $400 million worth of properties for $40 million than $80 million. And, as a matter of fact, if you buy a group of such securities and you know anything at all about business valuation there is essentially no risk in buying $400 million for $80 million, particularly if you do it by buying ten $40 million piles for $8 million each.

Since you don’t have your hands on the $400 million, you want to be sure you are in with honest and reasonably competent people. but that’s not a difficult job. You also have to have the knowledge to enable you to make a very general estimate about the value of the underlying businesses. But you do not cut it close.

That is what Ben Graham meant by having a margin of safety. You don’t try and buy businesses worth $83 million for $80 million. You leave yourself an enormous margin. When you build a bridge, you insist it can carry 30,000 pounds, but you only drive 10,000-pound trucks across it. And that same principle works in investing.

In conclusion, some of the more commercially minded among you may wonder why I am writing this article. Adding many converts to the value approach will perforce narrow the spreads between price and value. I can only tell you that the secret has been out for 50 years, ever since Ben Graham and Dave Dodd wrote Security Analysis, yet I have seen no trend toward value investing in the 35 years I’ve practiced it.

There seems to be some perverse human characteristic that likes to make easy things difficult. The academic world, if anything, has actually backed away from the teaching of value investing over the last 30 years. It’s likely to continue that way. Ships will sail around the world but the Flat Earth Society will flourish.

After getting an A + in Benjamin Graham’s class and graduating from Columbia Business School in 1951, Buffett went to work on Wall Street at Graham-Newman & Company. In 1957 founded his own partner ship, which he ran for ten years. This article is based on a speech he gave at Columbia Business School, May 17, 1984 at a seminar marking the 50th anniversary of the publication of Benjamin Graham and David Dodd’s Security Analysis.