Western Refining, Inc. (NYSE:WNR) is the second cheapest stock in the Large Cap 1000 Screener (which is free), trading on an acquirer’s multiple of 5.9.
It produces refined oil products at three refineries: one in El Paso, Texas, one near Gallup, New Mexico and one in St. Paul Park, Minnesota. WNR sells refined products primarily in Arizona, Colorado, Minnesota, New Mexico, Wisconsin, West Texas, the Mid-Atlantic region and Mexico; and through bulk distribution terminals and wholesale marketing networks and sells refined products through two retail networks with a total of 521 company-owned and franchised retail sites in the U.S.
It trades on a PE of 7.9, and, with a dividend yield of 7 percent, and a buyback yield of 6 percent, offers a very health shareholder yield of 13 percent.
Long/short contrarian investor Michael Boyd describes it as “unjustly cheap” for the following reasons:

What does it do?

The company operates in a highly advantaged position that is simply not being reflected by the market and I think it deserves a little bit more love. The company’s operations are simple: it buys oil (most of it domestically produced, in many cases shipping along pipelines it has ownership interest in), refines it into crude-derived products like gasoline, which it then can sell through its own wholesale fuel distribution and retail network. Outside of actually finding and drilling for oil, Western Refining has stakes in the entire chain of events up to the point you squeeze your finger on the gas pump to fill your vehicle. This gives the company almost complete control over one of the most demanded goods that Americans buy.

To complicate things, much like many other operators in the space, the company has made use of tax-advantaged MLPs. The company owns a 38.4% interest in Northern Tier Energy LP (NYSE:NTI) and a 66.2% interest in Western Refining Logistics (NYSE:WNRL). Through its NTI ownership, it shares an interest in the company’s refining facility in Minnesota and NTI’s retail-marketing network of 254 convenience stores. WNR spun off assets into WNRL (a MLP) in 2013 to split off its storage tank/pipeline business and sold its wholesale operations to WNRL in 2014. Western Refining is Western Refining Logistic’s primary customer.

What ties this whole conglomeration together and makes it all extremely attractive is the company’s three refineries and certain advantages they enjoy (these are located in El Paso, Gallup, and St. Paul). The El Paso, Texas location sits near the Permian Basin, long a hotbed for United States domestic production. El Paso is a big hub for pipelines leaving the Permian, and Western Refining takes full advantage. In addition, the company’s own pipeline assets run between the San Juan Basin (which feeds the Gallup, New Mexico refinery) southeast to the Permian Basin, helping link both of these refinery locations together.

All of these advantages have led Western Refining to have one of the highest gross margins in the refining business. 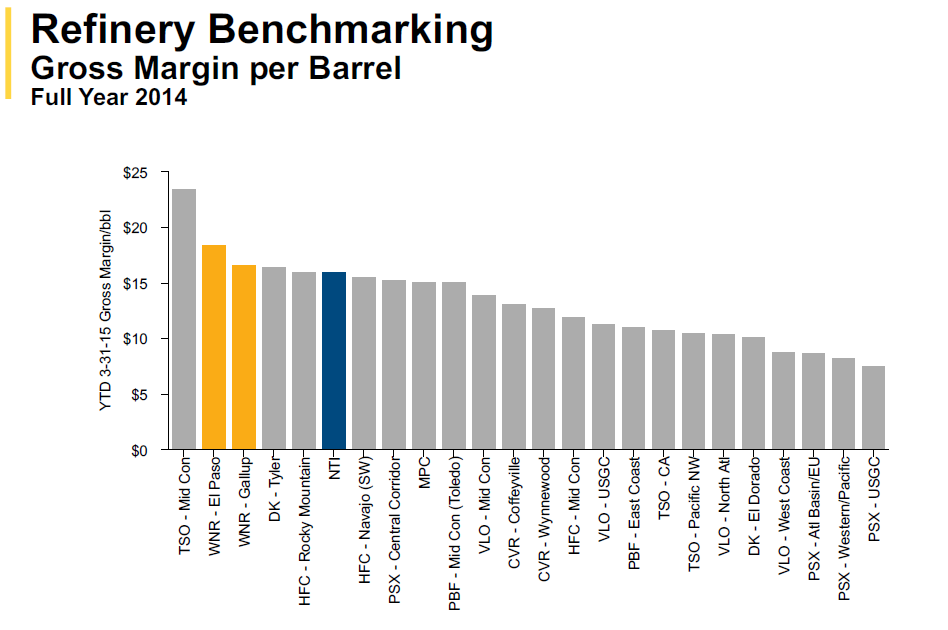 Given management commentary, we may see another 2015 special dividend if the markets remain strong:

With free cash flow predicted to be healthy all throughout 2015 and with $463M in cash on the balance sheet at the end of Q1, another special dividend isn’t out of the question.