TravelCenters of America LLC (NYSE:TA) is the fourth cheapest stock in the All Investable Screener with an acquirer’s multiple of 4.83. It trades on a PE of <8, and OCF/EV of almost 30 percent. Keep an eye on FCF/EV, which is a little anemic at 2 percent. Deep value, contrarian registered investment advisor Alpha Gen Capital likes it too. Here’s the analysis: 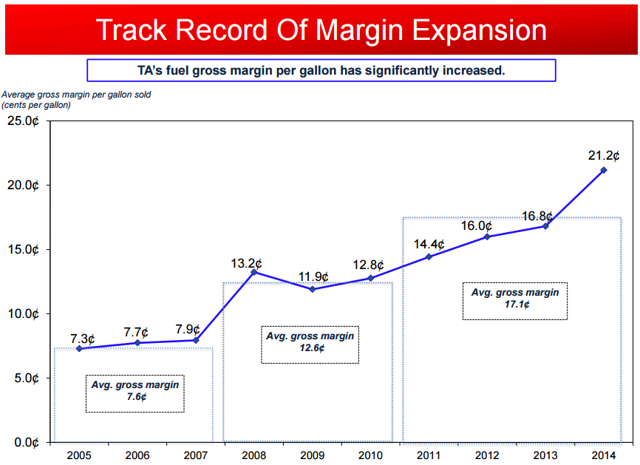 Valuation Bridge to 2017
The company trades as a low-margin fuel supplier with a ttm EV/EBITDA of just 4.0x, despite the large run in the share price over the last year. Much of that rise was driven by the increase in fuel margins as the price of diesel and gasoline fell. As it appears that the price of crude has bottomed, we expect fuel prices to slowly rise, which should help sustain the margins somewhat, although there will be headwinds.However, we think the market is missing the industry consolidation that is allowing better pricing margins in the fuel business. Applying a 4.0x multiple to just the fuel business while keeping the gross profit from the fuel business static, gives a value of approximately $200 million. The issue we have is that the business should be valued more as a truck repair/convenience store/QSR business which typically carry stronger multiples.

As we noted above, non-fuel gross profit accounted for nearly 70% of the company total. We broke out the valuation into two parts, fuel and non-fuel. The fuel part we kept static due to uncertainty regarding fuel prices and margins – though we believe this will increasingly become of a source of EBITDA growth simply due to industry dynamics. The growth piece of the business remains the retail operations along with truck repair. We applied a 4.5x EV/EBITDA multiple to the fuel EBITDA while applying an 8.0x multiple to the non-fuel – a typical low-end QSR multiple. Our base case is below: 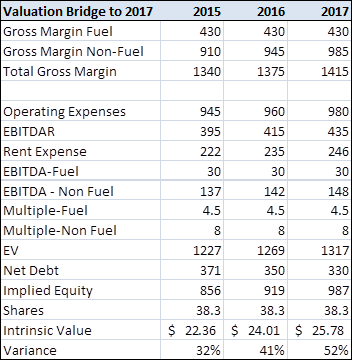 Our work suggests the shares are worth approximately $24 by year-end with upside optionality should the company A) realize even stronger fuel gross margins in excess of 21.2 center per gallon and B) any of the strategic options are undertaken. A combination of those events could easily send the shares to $30 per share in a blue-sky scenario.

Conclusion
TravelCenters of America continues to be misunderstood even though the shares have risen substantially in the last year. However, the rise in the share price is attributable to the rise in fuel margins driven by a sharp decline in retail gasoline and diesel prices. We think the market continues to miss the fact that this is not a low-margin fuel business but a QSR and truck repair business with strong margins. Valuing the business based on the sum of its parts where the majority of EBITDA is produced in the QSR/repair business, produces a much higher intrinsic value. Hence the reason that activists are swirling to unlock shareholder value through strategic options. We think the value is extremely cheap regardless of those strategic avenues and worth around $24 per share.