Valero Energy Corporation (NYSE:VLO) is the cheapest stock in the Acquirer’s Multiple Large Cap 1000 screener. Like AGX, it’s another stock that I’ve been pitching for six months (here I am pitching it to Jeff Macke as a takeover target last year). While it’s up more than +22 percent since, it remains an incredibly cheap large cap stock, trading on an acquirer’s multiple of 5.7. It’s also disciplined with its capital allocation and returning cash to shareholders through dividends and a buyback. Arie Goren likes it too. Here’s his rational: 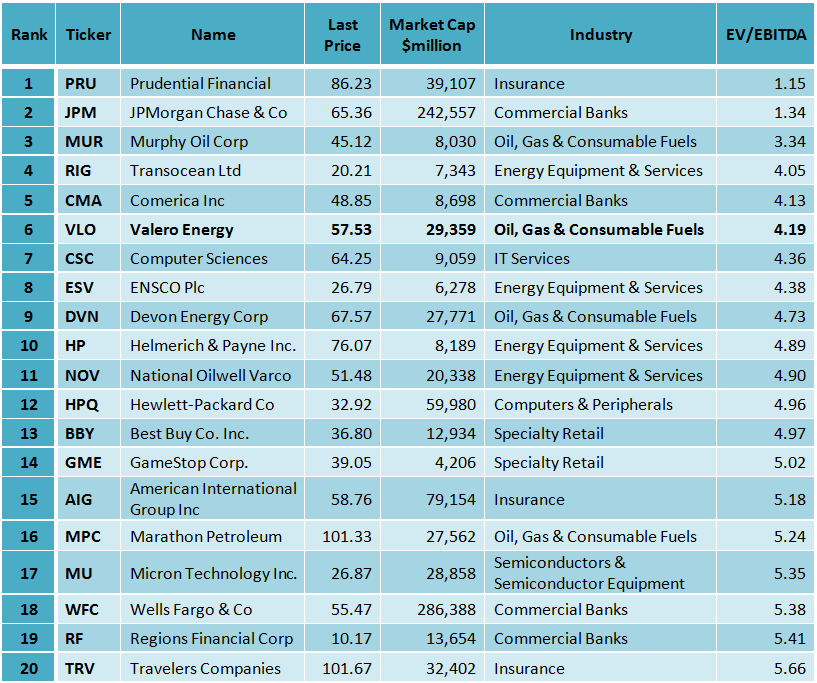 Valero’s valuation metrics are excellent. The trailing P/E is very low at 7.88, the forward P/E is also very low at 9.42, and its price-to-sales ratio is extremely low at 0.25. Moreover, Valero’s PEG ratio is exceptionally low at 0.56, and the Enterprise Value/EBITDA ratio is also extremely low at 4.19, the sixth lowest among all S&P 500 stocks. According to James P. O’Shaughnessy, the Enterprise Value/EBITDA ratio is the best-performing single value factor. In his impressive book “What Works on Wall Street,” Mr. O’Shaughnessy demonstrates that 46 years back testing, from 1963 to 2009, have shown that companies with the lowest EV/EBITDA ratio have given the best return.

In addition, Valero is committed to disciplined capital allocation and to returning cash to stockholders. The company said that its goal in 2015 is to exceed 2014’s total payout ratio. In 2014, Valero returned $1.9 billion to stockholders, or 50% of net income from continuing operations, with $554 million in dividends and $1.3 billion in stock buybacks. In January 2015, Valero announced a 45% increase in its quarterly common stock dividend from $0.275 per share to $0.40 per share. The forward annual dividend yield is at 2.78% and the payout ratio only 16.6%. The annual rate of dividend growth over the past three years was very high at 51.8%, over the past five years was at 11.8%, and over the past 10 years was very high at 21.9%.