At $11.59 FutureFuel Corp. (NYSE:FF) has an acquirer’s multiple of 4.4 and is another cheap company in the All Investable Screener. It manufactures and sells diversified chemical products, bio-based products, and bio-based specialty chemical products in the United States and internationally. FF has a $511 million market cap, $164 million in cash and no debt, giving it an enterprise value of $268 million and generated operating earnings of $59 million over the trailing twelve months. It has also earned operating and free cash flow on EV of 23.3 percent and 13.3 percent respectively over the last 12 months. Sales are down -28 yoy, which goes some way to explaining the discount, but at these prices it has a healthy 4 percent dividend yield, and trades on a PE under 10, which, along with a low acquirer’s multiple, makes it very compelling.

The balance sheet is extremely liquid:

FutureFuel’s balance sheet continued to improve, maintaining a trend that has existed since Q2 2014. Boosted by the retroactive reinstatement of the biodiesel blenders’ credit at the end of 2014, the company’s cash reserve rose to $160.4 million at the end of Q1, or almost double its level from three quarters ago (see table). The company also maintained substantial marketable security holdings at the end of Q1 that, if included, brought its total cash to $240 million. It entered Q2 with the extremely high current ratio of 6.4 and an assets-to-liabilities ratio of 4.5x. The company’s recent underwhelming earnings have yet to negatively impact its balance sheet in any meaningful way, leaving it with total cash that is equal to roughly half of its market capitalization.

Despite Brown’s view of $11 being the right buy price, I think the valuation is compelling now for the reasons he identifies below:

Based on its share price at the time of writing of $11.68, FutureFuel’s shares are trading at a trailing P/E ratio of 11.3x on an adjusted basis and 9.3x on a non-adjusted basis (see figure). It has a forward FY 2015 ratio of 11.2x and a FY 2016 ratio of 13.9x. All of these ratios are near the bottom of their respective historical ranges; as mentioned above, the FY 2016 ratio is based on a single low estimate and, in the case of the trailing ratio, the company’s 5-year average is notably higher at 13.5x. 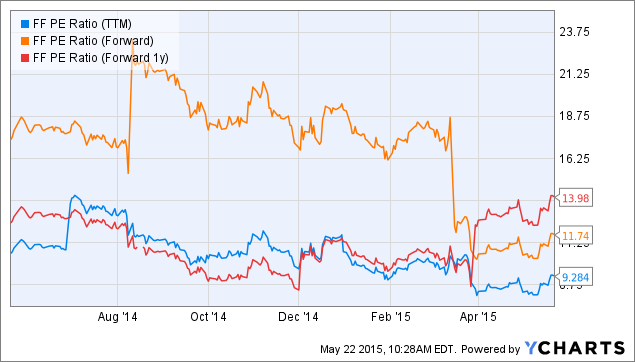 The company’s EV/EBITDA ratios also make its shares look undervalued. Its trailing and forward ratios are both well below the 3-year median (see figure), reflecting the bearish sentiment that has prevailed in the biofuels sector since late last year. While the ratios have recovered a bit since the release of the company’s Q1 earnings report, they have plenty of additional ground to cover before they return to the middle of their historical ranges, let alone the tops of them. 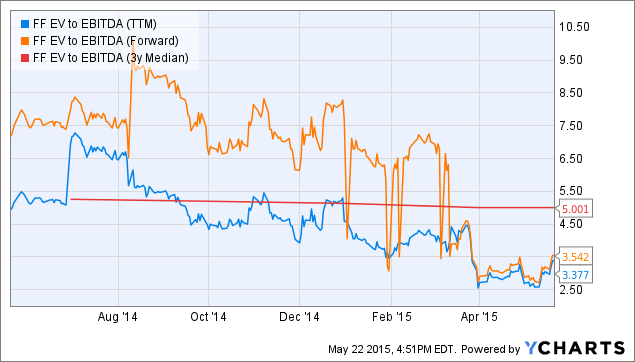