I’ve been pitching Argan, Inc. (NYSE:AGX) every chance I’ve had over the last 6 months. I pitched it on Bloomberg radio in October last year, and then again in December when Carol Massar reminded me it was down 15 percent. It’s back to where it was in October. It’s one of those Rodney Dangerfield stocks that just can’t get no respect. It’s an energy related stock. You can’t count its cash because it’s all pre-payment. It’s got one big customer. And so on and so on. All true. It’s also very, very cheap. It’s the second cheapest stock in the All Investable Screener (and it’s been first or second for 6 months or more).

Hedgie Hedging an Uncertain Future likes it, and I like guys who like it too. Here’s why

Argan, Inc. (NYSE:AGX) is primarily an engineering and construction firm that specializes in energy-related projects and has shown up in value investor Joel Greenblatt’s “Magic Formula” stock screener for several years now. AGX is one of those great stocks that stays cheap, or even gets cheaper, despite significant price appreciation. Closing at $32.57 on 5/8/2015, AGX sported a market cap of approximately $480mm and a P/E under 16. While that P/E seems reasonable, it’s not incredibly cheap. In the case of AGX, and most profitable companies, I think enterprise value/trailing 12-month EBIT is a more insightful measure. EV/EBIT provides a truer sense of a firm’s real value, relative to its recent operating results. This is especially true for AGX, which is sitting on a mountain of cash and cash equivalents: $334mm or 70% of its market cap. With a corresponding EV/EBIT ratio of just 1.6, AGX begins to look incredibly cheap. And by my own calculations, AGX’s current EV/EBIT ratio is almost 30% cheaper than it was at the start of 2014 (when I started tracking the stock) and 13% cheaper than the average ratio over that time period. So, even though the stock is up nearly 21% since the beginning of 2014, buying today is relatively less expensive than it was 16 months ago. That’s the kind of stock I love to own.

So, how does AGX compare to its competitors? The highlighted column in the screenshot below shows AGX’s EV/EBIT is significantly cheaper than other construction and engineering firms: 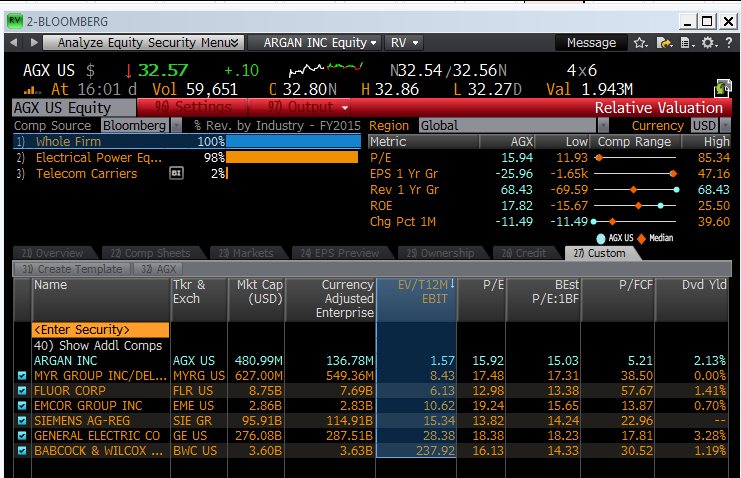 As you can see, AGX is the cheapest by far.

Why is AGX so cheap?

I think AGX’s current cheapness is due to a combination of being obscure (it has a small market cap and is only covered by 2 analysts) and being dragged down with many other energy-related firms, since it peaked around $41 in September, as oil prices cratered.

So what are the risks associated with AGX?

AGX’s results are driven by a relatively small number of projects, one of which (Panda Liberty) is expected to be completed in spring 2016. Additionally, as can be seen in the screen above, AGX’s competitors are often far larger and AGX may remain obscure amid these larger firms. And, if volatility once again grips the oil market, AGX’s correlation with oil may strengthen, to the detriment of the equity, regardless of financial results. Additionally, there is a line item on AGX’s balance sheet called “Billings in excess of costs and estimated earnings.” While I’m not an accountant, my understanding is, this number reflects cash AGX has already received, which may be deployed to pay for completion of its projects. While it is a large number, at $162mm on January 31st, even adjusting AGX’s EV to treat this line item like debt, still results in an EV/EBIT of just 3.4.

Given AGX’s TTM EBIT, I think fair market value for the equity today is ~$55. At that price, AGX would begin to approach, but still offer a discount, to the EV/EBIT of Fluor (NYSE:FLR), a large competitor which I also think is cheap and own. [Ed: I agree. It’s one of the cheapest stocks in the Large Cap 1000 Screener] Under a best case scenario, AGX’s results would broaden its visibility among investors, and it would start to approach a valuation closer to that of the overall market (the S&P 500 trades closer to 12x TTM EBIT). Under that scenario, the equity could double if EBIT does not deteriorate. While that scenario is unlikely, even approaching the valuations of its competitors gives AGX tremendous upside. The cash position creates a buffer to the downside and has allowed AGX to pay investors, via special dividends, to patiently wait for a more appropriate valuation.