2017 to date has been less pleasant. For the year, the All investable Screen has gone backwards, down -6.6 percent, and underperforming the Russell 3000’s strong 16.3 percent by a shocking -22.4 percent. This is the worst relative performance the screen has seen in almost 20 years. 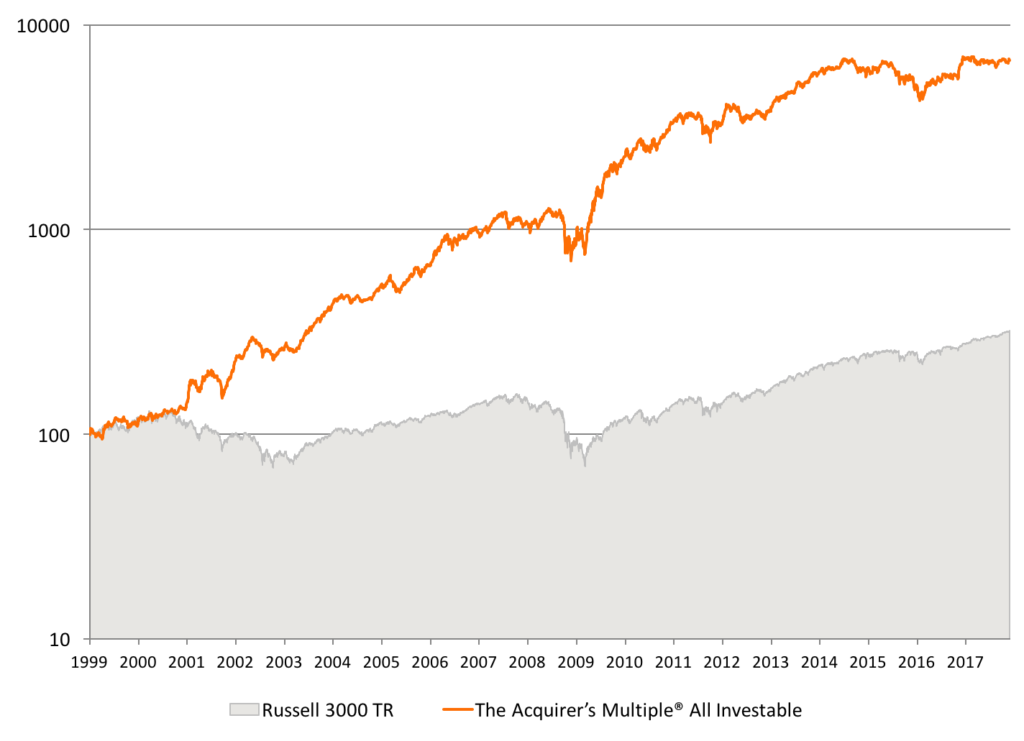 We backtested the returns to a theoretical portfolio of stocks selected by The Acquirer’s Multiple® from the All Investable stock screen. The backtest assumed the screen bought and held for a year 30 stocks selected from the All Investable universe (the largest half of stocks by market capitalization). The portfolios were rebalanced on the first day of the year using the most recent fundamental data. The backtest ran from January 2, 1999 to date.

Over the full period, the screen generated a total return of 6,765 percent, or a compound growth rate (CAGR) of 25.0 percent per year. This compared favorably with the Russell 3000 TR, which returned a cumulative total of 321 percent, or 6.4 percent compound. 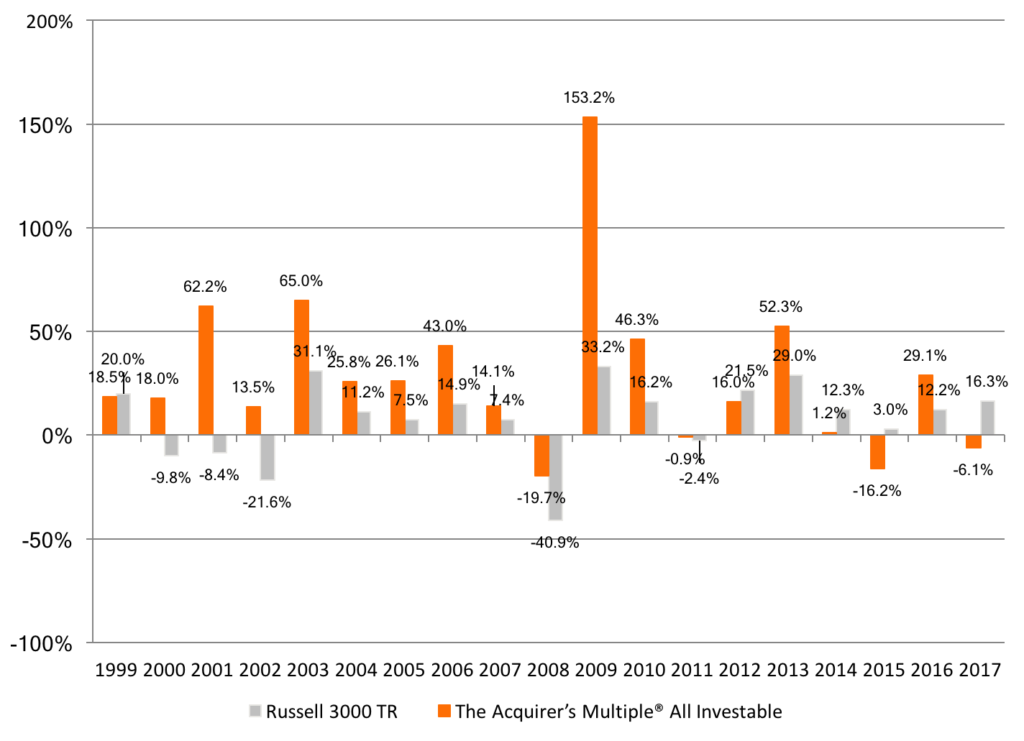 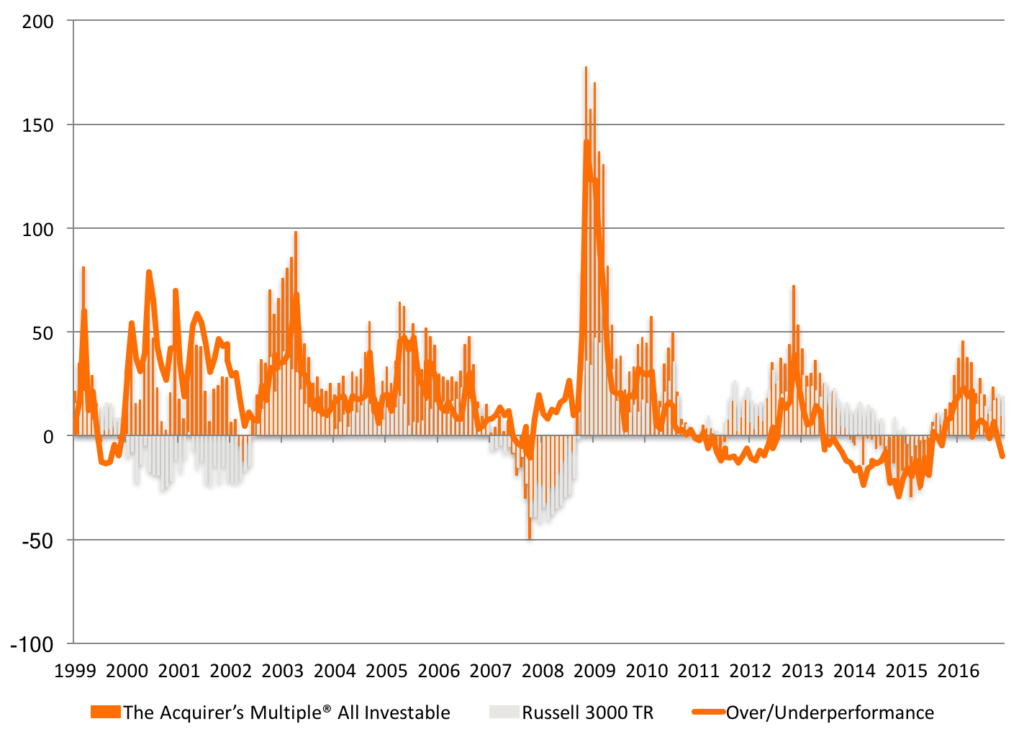 The average twelve-month return for any stock selected by The Acquirer’s Multiple® All Investable screen was 22.6 percent, beating out the Russell 3000 TR’s average stock at 7.4 percent by 15.2 percent. Through The Acquirer’s Multiple® portfolios underperformed from mid-2011 through to mid-2012, then mid-2013 through to early 2016, and again since early 2017, they still slightly outperformed over the full period. 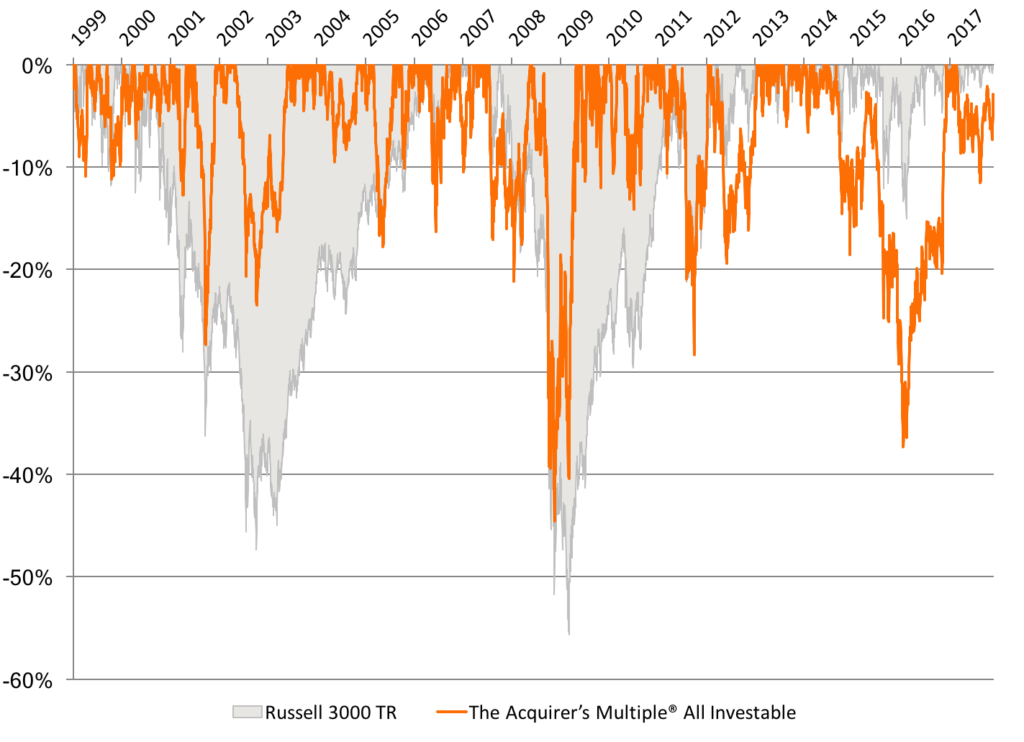 The worst drawdown for The Acquirer’s Multiple® All Investable screen was -45 percent, which occurred between July 2007 and March 2009. Over the same period, the Russell 3000 TR drew down -56 percent.

The 30-stock portfolios selected by The Acquirer’s Multiple® from the All Investable universe consistently outperformed the broader Russell 3000 TR. The trade off is periodic underperformance–approximately one in four years–and deeper and more frequent drawdowns.