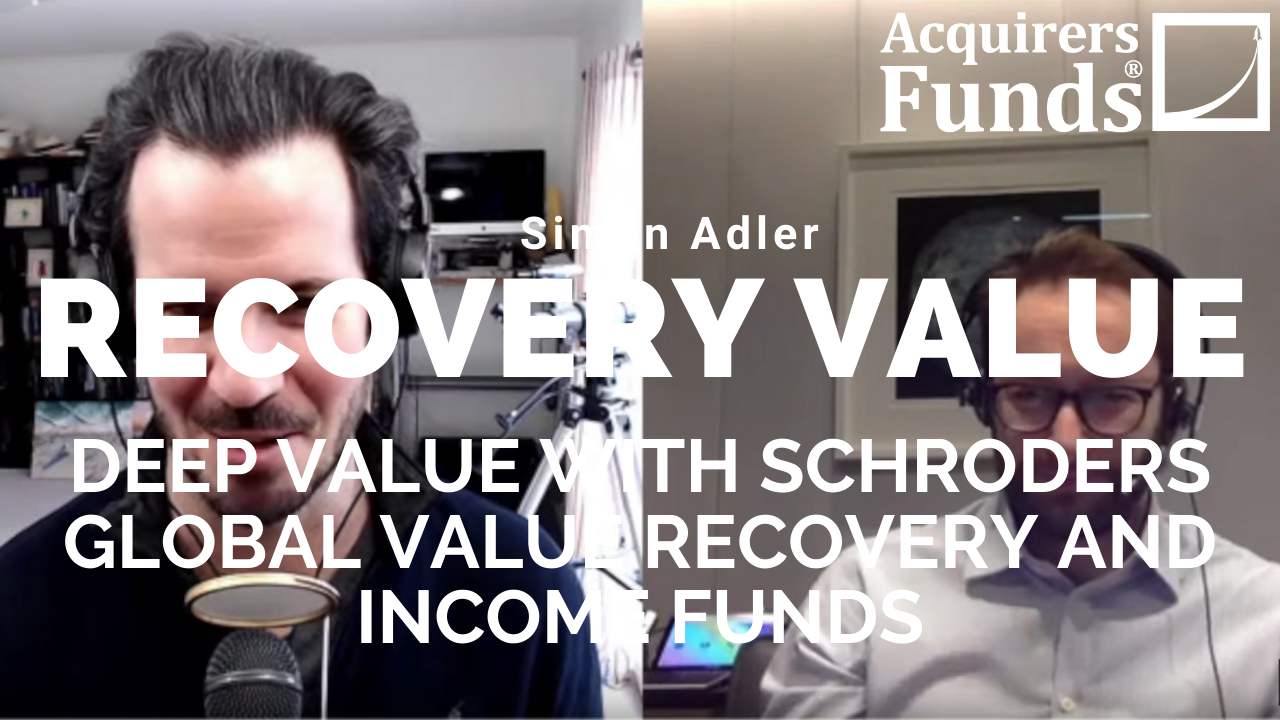 In his recent interview with Tobias, Simon Adler, a Fund Manager on the Schroders Global Value Team discussed how investors can learn from their mistakes using the U.S Military’s After Action Review:

Tobias Carlisle: So that dovetails nicely is something that we discussed before we started recording. I’m interested in, because this is something I’ve been thinking about a little bit recently, Errors of Omission and Commission. So you have an archive of all of your decisions, whether you put something on or didn’t put it on. Have you revisited those to see whether the threshold is too high or too low? Do you manage that process at all?

Simon Adler: Yes, absolutely. It’s one of the biggest advantages of the archives. So what we did is we started the archive in 2014. We look back now and go, “What were we thinking? Why did we not start this the day we were born.” I started my accounts as an eight year old. So we started in 2014 I have page I said it’s five years. So last year was the first time, five years on. So we literally pulled out the drawer and looked every single company we looked at in 2014. And we wanted to do it with a very systematic approach. So we used an After Action Review, which is when we went to do all the reading at the Evans did a lot of reading on this and he thought that was the best way of working out the-

Tobias Carlisle: What is that? What’s an After Action Review?

Simon Adler: It’s something the US army actually developed. It’s been adopted around the world and it’s effectively having a systematic process. What do we get right? What do we get wrong? By asking the same questions every time. So one of the issues, if you’re trying to assess an investment, is if you ask different questions each time, you’re not getting a proper assessment. So we asked every single company from 2014, “Did we get the sales well? Did we get the margin on? And so on and so on and so on. We can then build that up.

Simon Adler: The team joke that I call it a Coding machine. I’m not the most technological guy on the team. But we then have all of those, get the sample size to a level that’s credible and then we can say, “Okay, over every company, how good were we at sales? How good were we at the margins? And so on. Are we better in this sector than that sector? This country, that country, this individual, that individual.

Simon Adler: Now at the moment we’ve only got 2014’s numbers, but as we go on each year we’d be able to look at this over very big sample sizes and that promises and will hopefully be a phenomenal resource for us as a team, we are determined as a team to get better every single year. But we want to get better on the basis of data and evidence, not conjecture and not cherry picked thoughts, which are brains are prone to do so. So we did on evidence, we do it on data and we will try and get better and work out how we can improve it.

Tobias Carlisle: I guess there are two questions for me from that. One is do you adjust for confounding variables? This might not be a representative market, last five years have been difficult for Value, more of a growth style market. And then did it reveal anything? Are there any biases? What did you find?

Simon Adler: So on the first one, one of the reasons we don’t look at the share price performance as a prime, we do look at that, but that’s not what I want. We’re looking at the sales and the margins is to try and limit that issue. However, that is still an issue. It’s been a good economy for the last five years. We’re very cautious and prudent investors. So the moment we assume most companies sales are going to fall because the cycle’s been girth.

Simon Adler: And so we’re not able to see what actually happens in a normal environment because it’s been a good environment. So that is an issue. So now the reason why we want to learn the lessons over a longer period of time when we’ve seen a full economic cycle. So we think about that very hard and it’s not an ideal environment to measure it, but there’s no excuse for not measuring it and we can learn some things.

Simon Adler: And onto your second question. Yes, it did reveal some interesting things. Now we’re cautious about how we share, about the weaknesses that were identified, but we’re also cautious because the sample size isn’t that big and the economic cycles being one way, but it did reveal something. And then when we go through 2015’s numbers, we’ve got that hypothesis and we can say, “Okay, cross the biggest sample.”

Simon Adler: Which looked at more companies in 2015 and 2014, is that still true? One of the difficulties of 2014 is if you want to know it down by country, individual sector, actually the sample sizes aren’t big enough to be credible. But as the years roll by and those sample sizes start getting towards a thousand, that excuse goes and we’re about to see if what we may have identified is something we need to adjust or not.

Tobias Carlisle: I can understand why you might want to share some of the weaknesses or areas that you’ve made. But what about framing it as for other Value investors out there? Where might they pay a little bit more attention? Where should I be looking?

Tobias Carlisle: I make a lot. I mostly make mistakes.

Simon Adler: Well, so when we Value a business we try and normalize the profit stream. We say “What’s a normal environment sales like? What’s a normal environment profit like?” And one of the things that we had is a hypothesis, and this is exactly why you need to do things on data and evidence, is that in our heads we thought that we were quite good at normalizing the margin, but less good at the sales .

Simon Adler: The narrative that we had in our heads was that the companies were buying, of often growing quite quickly, they take it on lots of unprofitable sales. So to get back to normal, they get back to the average top margin, but they have to share the load of sales to get that. Make sense and it’s intuitive and it’s exactly why now narrative it’s dangerous. Because the data and the evidence suggested that actually we were better at forecasting the sales than the margin.

Simon Adler: And the lesson I think that we can take from this as Value investors is all investors is if you try and learn lessons or narrative and on what your brain tells you, your experiences, you’ll probably make mistakes.

Simon Adler: Whereas if you try and learn lessons on the basis of data and evidence and not memory, but what you actually wrote down five years ago, you’re in a much better place to try and learn your lesson. So we’re thinking very hard about how we can try and improve that. And it’s the whole point of the Value archive, because if any of us try and remember why you made a decision five years ago, we’re kidding ourselves if we think we’re going to get that right. Whereas if you’d written it down, it’s that black and white

Tobias Carlisle: That’s fascinating. What do you attribute, why are sales easier to forecast than margins? Are you being conservative and then it’s exceeding expectations, what’s the driver of that?

Simon Adler: We don’t really know yet. We’re going to need a bigger sample size where we’re cautious about putting a narrative onto it. And in terms of what we’ve seen so far, I think we can’t draw really big conclusions from it. Because the sample size isn’t big enough really, the standard deviations are quite wide and so on. So I think we’re not drawing from conclusions at all from this.

Simon Adler: And we’re very cautious about doing that. If however, when we’ve looked at one and a half thousand companies, we’ve had two economic cycles and so on . And if it’s still telling us the same thing, then we’re going to go and have to do some serious work. But at the moment we’re in the investigative stage. We’re still investigating, still trying to learn, we’re still trying to get better and we’ll see how that goes when we pull out the 2015 draw and see what it tells us. So in this time next year, I may have a better answer for you.

Tobias Carlisle: Well I’ll have you back on and then hopefully I can persuade you to publish or something like that because I’m, fascinated by that process. Can we just move on… I’m sorry.

Simon Adler: So I was just going to say it’s a critical way of trying to get better because we want to be the best Value investors we can be. And if we don’t look at the evidence of the mistakes we’ve made, we’re not going to become better investors. And for our client’s sake, for our own sake that we regard that as a parliament, part of our culture on the team.