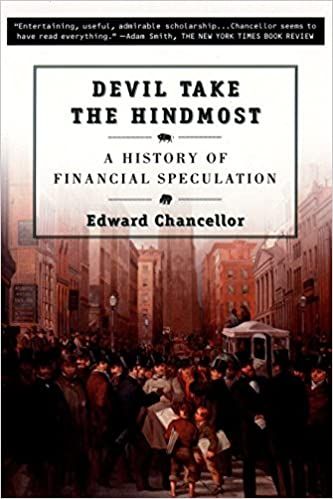 In his book – Devil Take The Hindmost, Edward Chancellor discusses what happens when investors continue to maintain faith in a ‘new era’ of the stock market. Here’s an excerpt from the book

As long as investors maintain their faith in a new era and ignore dissonant information, then stocks will continue to rise. In the short run, a rising market serves to cover up weaknesses in the economy.

In this way the new era analysis becomes something of a self-fulfilling prophecy.

It has been estimated that between early 1990 and the spring of 1998 the rising U.S. stock market boosted household wealth by around $6 trillion. Capital gains realised from the sale of shares reached $184 billion in 1997.

Profits on investments have supported the growth of consumer expenditure, which has risen faster than wages and enabled the savings rate to decline until it turned negative in 1998. Rising receipts from capital gains tax, $44 billion in 1997, also helped to produce a federal budget surplus in 1998.

Escalating share prices encouraged the establishment of new businesses and boosted capital expenditure. The stock market was hailed as the greatest wealth-creator America has ever seen.”

According to one analyst, it had become “a perpetual motion machine” (an unconscious echo of the legendary bubble company of 1720), in which every share price rise generated further rises.

Yet in the past a point has always been reached where both speculation and credit arrive at the limits of their expansion. At that moment the business cycle reappears with a vengeance, the perpetual motion machine begins rotating in another direction, and the new era is consigned to history.