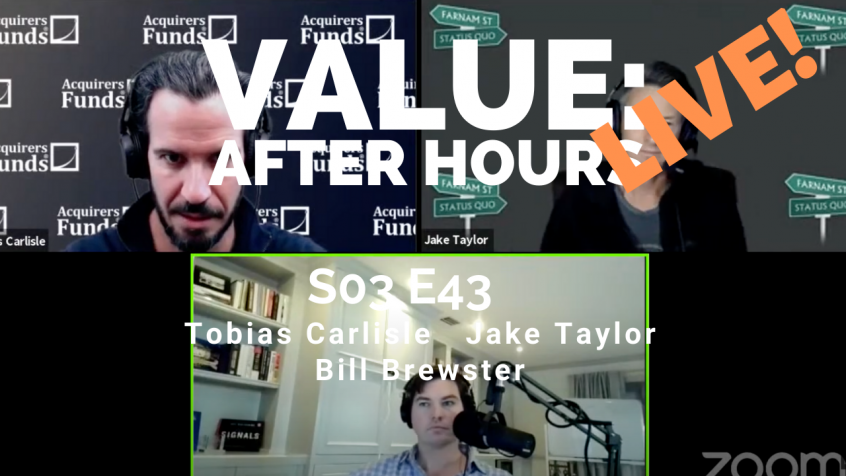 In their recent episode of the VALUE: After Hours Podcast, Taylor, Brewster, and Carlisle discuss David Gardner’s Investing Strategy. Here’s an excerpt from the episode:

Bill: No, look, I don’t know. I mean, so, different presentation that I was in today. The guy says, “Value investors are like accountants. They want to close the gap between intrinsic value in the market price. Growth stock investors actually get to enjoy the benefits of growth. The math is irrefutable. If you get the math right, then it’s over.” I think where growth stock investors such as David Gardner, and the guy that I was listening to today are more correct in my estimation than what I used to be when I only looked at like trying to buy cheap stocks is, you know, if the business can reinvest in itself and you can win for a very long time, like, yeah, you can take a doughnut on some of these positions. Like David Gardner has had a lot of big losers. But he also owned The Trade Desk since like three bucks a share.

Now, if you want to come at me and say, “Well, it’s a bubble, bro,” fine. I’m going to ask you, “What stocks you own that you’re up 33 Exxon?” If we cut his stock in half, he’s still up 15x. That’s a lot of re-ratings that you got to play and he didn’t pay any taxes. That’s just one of many for him. So, I’m not a hedge fund manager, I’m not a professional money manager, I’m just a guy trying to figure out how to invest. I think that the Motley Fool, a method of looking for quality growth companies, and taking less concentrated bets, and holding them for a lot longer for someone of my skill set is much, much smarter than waiting for the next Coca-Cola, and then putting 30% my net worth in and then finding out that actually, I didn’t realize that the– [crosstalk]

Bill: Yeah, that’s right. Some of what I say comes from that standpoint. I’m probably not as smart as most of you, you know? So, I’m just trying to figure out what works for me, and I think it’s easy to say, “Well, multiples,” but also like, go look at the results for real and think the people that have won bigger, the people that have bet on businesses that have gotten much bigger over time, and yes, multiples have helped.

Tobias: Yeah, that’s undeniably the case, but we’re looking at–, it’s been a long, long period where growth has worked, and a long, long period where value has not. If we wound it back, and we had a look at these numbers in 2014 prior to this run, you draw a different conclusion, and that’s probably what makes this such a difficult game that as one starts looking much, much better than the other. It’s paradoxically the other one that is becoming the better opportunity and that’s why investing such a hard game. That’s not to say, that’s not a commentary on the approach that you’re adopting at all, like, you got to– ultimately you got to do what is best for you that allows you to buy more of something once it’s gone down, like you need conviction, whatever strategy you’re doing. But I think that a lot of the run that we’ve seen has been multiple expansion in–

Growth stocks always definitionally they grow faster than value stocks. It’s just you have to pay a price where you get the optionality in it rather than paying for it, because it’s hard to handicap. I say this all the time. I don’t know that my argument doesn’t look pretty particularly smart at the moment. I get that, but it is what it is.

Bill: Yeah, I mean, look, I honestly don’t know. I do have serious questions when you know– So, energy. Energy is this idea that everybody loves, and everything else is a bubble. So, let’s go to energy. Well, okay. If we assume– [crosstalk]

Bill: Well, maybe, that’s because it’s a shitty company or business. It doesn’t deserve a big multiple. To be fair, I guess, what I’m saying is, if it is true that supply is fundamentally constricted, and their earnings go through the roof, that’s an awesome trade. I don’t know how to trade a cyclical, I don’t know how to forecast where energy is going to be in the future, I guess what I continue to ask myself is, “Let’s say we’re in this bubble and all these multiples are super high. Does that impact total energy consumption?”

I would think the wealth effect has something to do with spending, and I would think spending has something to do with overall energy consumption. So, let’s say this bubble pops. Like what happens to energy demand? I don’t know how to underwrite the E at all. Like I said, I might just be dumber than most people, and I just have to do what I get to do.

Tobias: It’s a little bit of a false dichotomy, though. It’s not cyclicals on one hand and growth on the other. There’s a lot in between that can be a very good business that is managed pretty conservatively, and this is like, I wouldn’t say that I’m a cyclical investor. I would say that this is what I’m trying to do is buy sort of unloved, but still pretty reasonable businesses that are run by a management team is doing the right thing. They’re taking advantage of the fact that they’re undervalued.