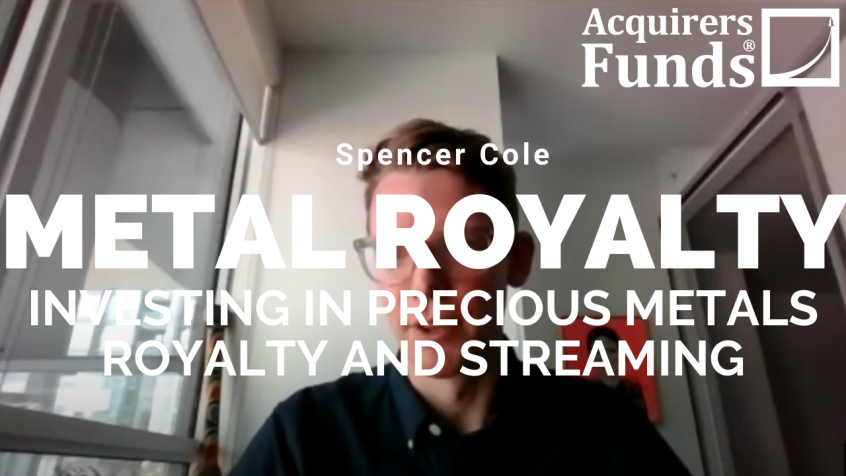 During his recent interview on The Acquirers Podcast with Tobias, Spencer Cole, CIO at Vox Royalty discussed How To Value Royalty Companies. Here’s an excerpt from the interview:

Tobias: How do you think about valuation? Are you looking for some sort of yield? Is there a P/E ratio for the royalties? How does that work?

Spencer: It’s a really interesting nuance between, say, mining companies and royalty companies. Most mining companies, depending on where you are in the commodity cycle, they’ll trade it between, call it, five to eight times earnings, generally. Royalty companies typically trade at anywhere from 30 to 50 times earnings, which for some people, particularly generalist investors coming into the industry, they sit there scratching their heads and say, “Why the hell would I pay 40 times for this royalty company?” But for all the reasons I mentioned before and the fact that a royalty company say, take Franco Nevada. It’s a $28 billion royalty company. It’s run by 30 people. The operating cost profile and the leverage you’ve got to future investments is just this huge operating leverage. Moreover, every time a new discovery is made, they get all that upside without a single extra dollar out the door.

Going back to your question, how do we value royalties and how royalty company is valued, they typically evaluate on a price to cash flow or price to earnings multiple basis, and then also, the other metric that’s commonly used is price to NAV, because the other quirk about a lot of royalty companies is, they’ll trade at a substantial premium to their intrinsic net asset value. If you run a discounted cash flow model of all their key royalties, it’s sometimes between 1.5 to 3 times that intrinsic value, often, because a lot of these mines just continue to expand over multi decades.

Tobias: It makes total sense, because most of the royalty is falling through to the bottom line. It’s open for you to reinvest, whereas in a mining company, that’s being chewed up on the way through. That makes total sense. I sort of meant more, how do you think about the actual royalty itself, when you buy a royalty is there? What’s the basis for making a valuation for something like that?

Tobias: No, it’s fascinating. It’s fine, but it’s just for my own interest.

Spencer: Yeah, sure. Within our 51 investments in our portfolio, we have 5 producing assets. Then, we have a further 16 assets that are at development stage, which have some level of engineering study that has been done on them. Then, the balance of the approximately 30 royalties are exploration stage royalties. When we approach a new royalty, typically we have a bias and a preference for something that has some level of engineering study done on it, whether that’s pre-feasibility, or a feasibility study. Then, what we’ll do is, we’ll apply discounted cash flow approach to it. But then, we’ll overlay a series of incremental risks on that.

Tobias: You’ve got this profile at the moment where you’ve got certain exposure to gold and the other the other metals. Is that intentional, or it’s opportunistic, you take what you can find at the time, and so, it’s possible that that could evolve over time? Or, is that something that you’re going to try to sustain that exposure to gold and so on as it is at the moment?

Spencer: Yes. It’s something that is quite deliberate. In our proprietary royalty database, we have almost 8000 royalties in there. We can change out targeted lens towards different commodity groups in different countries at will. The reality is, a large part of ours hit our overweighting towards gold is because as I mentioned before, gold has been the most explored for commodity in history, and so, every time a mining project is sold and a royalty is created, a lot of it’s a function of how many of those projects have been sold. Out of our 8000 royalties, the majority of those royalties are gold royalties, because that’s the most common project being explored for and sold for royalties.

Part of it’s just a function of how many gold royalties there are out there. But as I said, where precious metals have weighted, but opportunistic outside of that. We have had some of our investors have come to us and said, “Hey, we see you’ve got some of these other royalties. We don’t really like those commodities.”

So, we’re not really investing in you for that exposure to some of these niche metals, like graphite, for example. Three months ago, we entered into a deal, a partnership deal where we basically, are selling two of our non-core royalties they’re in graphite, and we’re selling it to a smaller royalty company that is firmly focused on battery metals, which graphite is a key component of it. That was an example where we rebalance that portfolio away from graphite, because we weren’t really getting much value from the market for graphite royalties, and we could see that the value is going to be unlocked by putting them into a much more nimble and smaller royalty company.