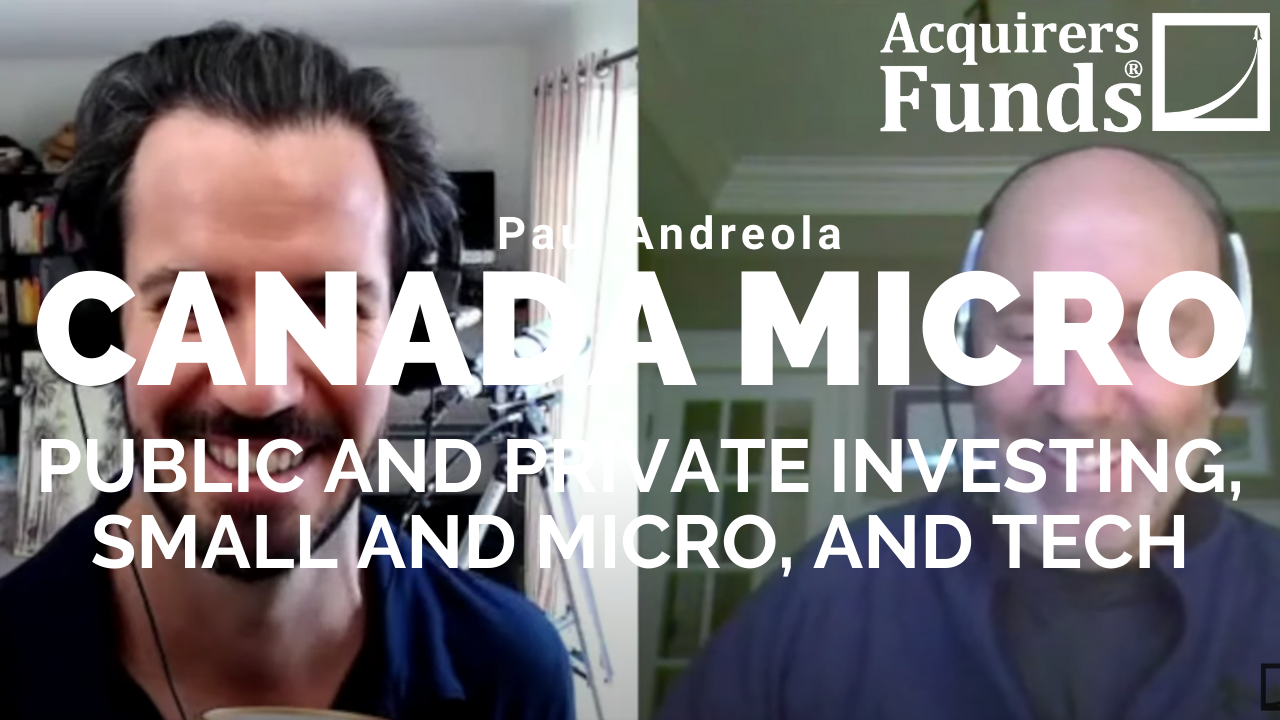 Paul: Then what happened was, eight years into construction and just breaking my back and hating getting up in the morning to go to work, my wife at the time had said, “You’re miserable. Find something else to do.” [chuckles] What I decided to do is, I quit my job. At the time, the internet was finally out there. I wouldn’t say day trading, but I started investing and using some of the tools that I learned from different books, and there were certain books that really stood out for me. I started using those tools and started investing on my own. And then, there’s a couple of events that triggered some real changes in what I was doing, and most of them were books. I remember reading William O’Neil’s How to Make Money in Stocks.
.
Tobias: Is that CAN SLIM?

Paul: CAN SLIM, exactly. Prior to that, I’d be going down the library. I try to review company filings, and not having a clue what I was doing really. I was just trying to find companies and investing in some idea that I thought just sounded good. The reason I even found out about CAN SLIM was, I had entered a stock-picking contest, and there was probably easily 1,000 people that are in this contest, and I think the prize was $100,000 portfolio. This bank-owned brokerage firm was going to give whoever the winner was $100,000. So of course, that was incentive for me to jump in there.

I think over the course of the six months, this relatively short contest over six months, I came in like 56 or something like that over 1,000, which I thought was impressive. But the guy who came in first just blew everybody out of the water, like second place wasn’t even close. They interviewed him and he said, “I had a little strategy.” And they said, “What’s the strategy?” And he said, “Well, literally all I did was I bought whatever stock was hitting a 52-week high and it was trading close to $1.” And then they would ask him “And then what?” And he goes, “No, that was it. That was it.”

And I go, “What? I did all this hard work. I studied and did this and this that.” And then like I said, well, it was based on a principle that he learned out of CAN SLIM, which if you know CAN SLIM, the 52-week high is a critical component which blew my mind because it was always– for me, prior to that was, you’re going to buy something cheap, you don’t go and buy something expensive. It just doesn’t make any sense.

So, I read the book, I probably read it over three or four times, and I said, “Okay, well, this sounds crazy, but I’m going to try.” And lo and behold, I started trying it and the performance of my portfolio just went crazy. It literally went from maybe averaging 10% to 15% a year, it’s like 100%, 120%. I go, “Okay, something’s going on here.” But because I’m based in Canada, [unintelligible [00:13:18] Canadian market, I tried to tailor it a little bit to the Canadian market. There’s some nuances in Canada that’s a little bit different in US. Stocks typically traded at a lower sort of price point. There’s different stock structures. There’s not as many micro-cap funds, things like that. So, I started to understand the industry a little bit more and started to formulate CAN SLIM to more of a Canadian model. When I did that, my performance really went crazy.

I’m working at home, I’ve got a small portfolio, I’m starting to grow this portfolio and my dad who is so anti-stock market, it was crazy, and he was convinced. I left my 9 to 5 job and had started trading stocks.

Paul: Gambling. He thought it was just full of sharks and crooks, and you name it, which it is. But I was making money and he couldn’t believe it. He said, “Well, listen, I’ll give you $10,000, do that for me.” And I did, and he started making money. So, the next thing what happens is he’s telling his friends and other members of the family. And before I knew it, I had seven or eight accounts that I was trading for. The deal was, I would get a percentage of whatever the winnings were. So, I started opening up more and more of these accounts at this brokerage firm and thinking, “Hey, this is great. I’m actually making money. The world’s perfect.” I get a phone call from the brokerage firm saying it was their compliance department saying, “What are you doing? Are you licensed to do this?” “I said, No, of course, I’m not licensed to do this. I’m doing this on behalf of my family.” They said, “Well, you can’t do it if you’re not licensed.” So, of course, next thing in my head was, I’m going to go get licensed.

I became a broker. And of course, once you’re a broker, you can’t get a percentage of the performance. [chuckles] So my income went from way up here to way down here, because I was just generating commission now. So that’s kind of it. I got into the brokerage business that way. As a matter of fact, I really struggled to even get in because they were only hiring people with MBAs, and I found a little, I’d almost say bucket shop now, it’s not really around anymore. But they hired me because I phoned every day until they finally got sick of me calling and had me join. I joined the firm.

And what was interesting is I had developed this strategy that was working, and I’m this young guy coming into this brokerage firm full of about 100 different brokers. And I used to think that the brokerage industry was this sort of gilded doors and these are all the smart people and these are the guys that have studied this stuff and have a PhD in economics and you name it. I got in there and I was blown away how chaotic and unprofessional and how poorly– [chuckles] it was crazy.

I was actually the first person there to request financials. At the time, I was actually buying a lot of US stocks, and I would go to my boss and say, “Hey, look, I need to find quarterly statements on this company.” And they wouldn’t know what to do. They had no idea almost what that meant. At that time, this is how bad it was, if I wanted quarterly statements on a company in the US, they would have to send a request and wait for it to be mailed in. [cut audio] literally mailed a set of financials. I moved heaven and earth, the internet was just around that time. And I moved heaven and earth to finally get an internet connection to the firm and this way, I could access financial statements over the internet.

Slowly, surely what started to happen is, as I was doing this and I was finding these little companies– and this is at the early, early stage of the tech boom, I’d say early 90s, for sure. Others around me started to see what I was doing. And before you knew it, as soon as I would go and place an order–because at the time you have to go and run an order into the desk, and I would see my order get placed, and immediately right after that, there’d be a bunch of other orders coming in from my firm. Somebody was tailing me on everything I was doing.

Overtime, I got a bit of reputation for having found these weird companies but the performance we were generating was astronomical. I can easily count in the hundreds how many stocks that we’re buying that were going up four or five times in value over the course of a year, it was crazy.