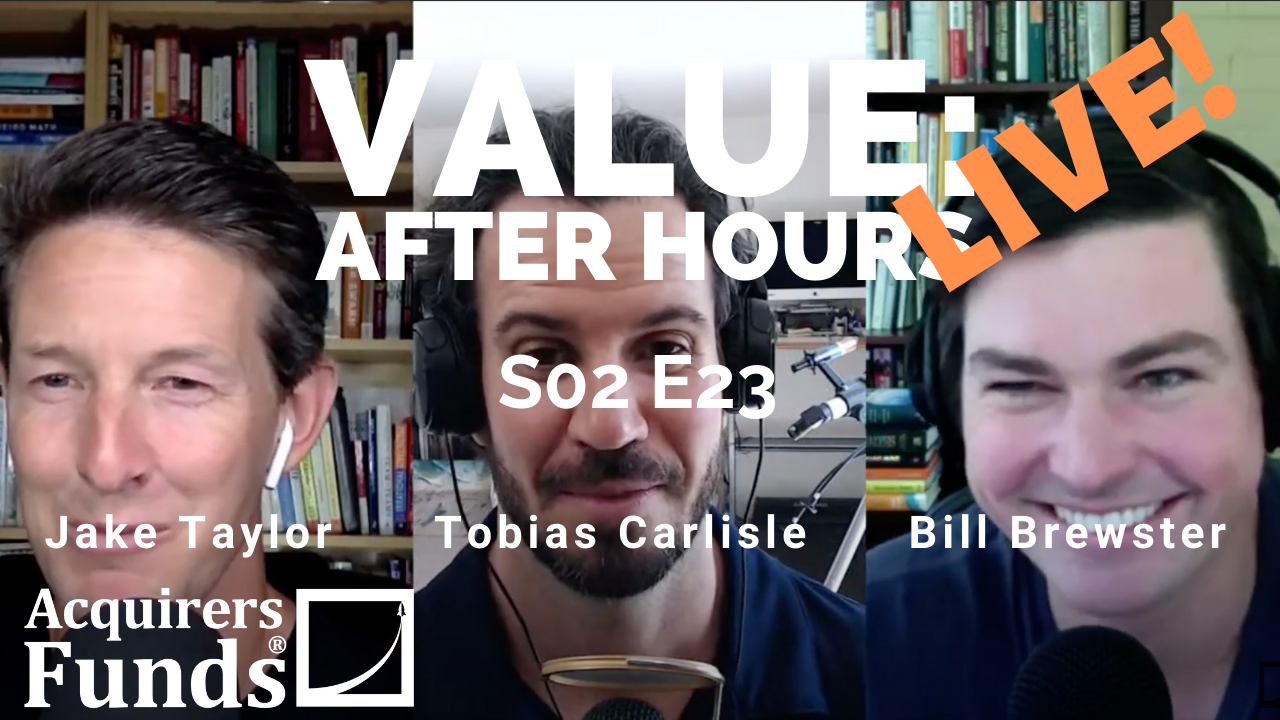 During their recent episode of the VALUE: After Hours Podcast, Taylor, Brewster, and Carlisle discussed Being The Right Size In Investing, Competition, And Growth. Here’s an excerpt from the episode:

Jake: Yes, it’s veggie time. We’re gonna be talking about an article—or I guess an essay, you would call it, from 1926, that’s called On Being the Right Size and it’s written by a geneticist whose name is J. B. S Haldane. He was a science popularizer of his day, like a Richard Dawkins or Stephen Jay Gould.

In this article, he’s talking about how every type of animal has the right size that it’s supposed to– that it becomes. And it’s really it comes down to math is the reason why. The first thing that he asks us to imagine is: Take a normal man and turn him into a giant. He’s 10 times as tall, 10 times as wide, and 10 times as thick. That would then make him 1000 times the normal weight of a man, which would be probably around 80 tons or so. If you took a cross-section of his leg and looked at his femur, his femur would only be 100 times the size of a normal man’s. Basically, that bone would have to be 10x the strength of a normal man’s, otherwise it’s likely to break. Every square inch of giant bone has to be that much stronger because the mass is growing at a faster rate than what the cross-section of the surface area of the bone. And it just so happens that the human thigh bone does break under about 10x the normal human body weight. It’s likely that a giant if it had a similar bone strength would break its leg on every single step that it took.

Bill: That’s unfortunate for the giant.

Jake: You can imagine– Well, maybe this is why Yao Ming’s career was so short. This is a pretty good argument for why he would have foot trouble. Now, let’s imagine gravity for a second. If you take a mouse and drop it down a 1000-foot mineshaft and it lands on a reasonably soft surface, it will be days but it will live. Haldane tells us that a rat when dropped that same will die, a man will be broken, and a horse splashes. This is what he says, it’s pretty gross.

But what it has to do with is the weight to surface area ratio of a falling body. If you imagine that– this is why a parachute works, is because it greatly increases your surface area that the air has to move around while not adding as much weight. This is why insects can crawl on the ceiling because the gravity doesn’t hardly affect them at all. But insects instead where they get afraid is actually around water. If you got out of the bathtub, due to the surface tension of water, you have about a 150th inch layer of water on your body as you get out, which weighs about a pound. We don’t notice it because one pound evenly distributed over your body doesn’t really register. But if you’re a mouse and you’re getting out of water, it’s about your entire body weight, a wet mouse needs to be able to carry its whole bodyweight out. Now, if you’re a fly that lands in the water, it’s many times your bodyweight, that you have to be able to fly to get out. That’s why you see like– [crosstalk]

Bill: Stuck in the water.

Jake: They get stuck in the water. This is why most insects have a– they called a proboscis I think it’s called, which is basically like a tube that sticks out of their– to be able to drink water so they don’t get too close to the edge and fall in.

I was trying to think about like what does that do for a business? What’s the business context of– what’s the weight of water, and maybe it has to do with like regulation and compliance. If you are a little insect in the business world, and you have to try to get your own body weight out, and you have this compliance, it’s weighing on you, you can end up drowning in it. Whereas if you’re a really big company, you don’t even notice the compliance problems. If you’re JP Morgan, you have an entire team of compliance officers who can take care of this stuff. You could see when it comes to size, compliance kind of things matter. I don’t know if you guys have any comments on that before I jump to the next part?

Bill: My bad. How do you own Berkshire when you’re talking about size? This is the whole argument against them, right?

Tobias: We’re not clear if it’s a benefit or negative yet, are we? Berkshire can get out of water and it doesn’t even notice the water clinging to it, but it kind of clings to the ceiling.

Bill: Yeah, maybe it’s too big to do anything– [crosstalk]

Tobias: It’s toast if it falls down the wall.

Bill: –previously could have been doing.

Jake: All right, we’ll cover some more ground and then we can come back to Berkshire. Now, imagine a worm that has a smooth skin and a straight alimentary canal, like basically the food that comes through. Now, take that worm and make it 10 times as big. Well, what ends up happening is that you would need to have 1000 times as much food and oxygen, so the worm it absorbs oxygen through its skin and it absorbs nutrients through its alimentary canal. You have to have 1000 times as much food and oxygen available for this worm to support a 10x in its size because the surface area of inside the worm and the outside of the worm only grows at 100 times whereas the mass grows at 1000 times. Now, how evolution has got around that has been to create more complex shapes. Our human lungs are incredibly folded up and dense and they have incredible surface area. It’s actually about 100 square yards, which is about half of a tennis court, your lungs have that much surface area inside of them. That’s how we’re able to draw so much oxygen out of the atmosphere.

Now, think about insects. They breathe through their skin, through these little holes. They don’t have lungs, they don’t actively pump oxygen through their body. It’s just about the sheer diffusion of molecules like bumping into each other that move around. So, what ends up happening is that any insect that is– the hole is more than a quarter of an inch away from the air, it won’t diffuse enough and that will be then an oxygen-depleted area of an insect. That’s why they don’t get to be bigger than they are is because they don’t have a way to pump oxygen throughout their body.

Jake: Yeah, maybe thank God. Let’s bring this back to the business world and think about oxygen as sort of information and information processing. Every business takes all of these inputs – energy, information, human talent, capital. And they arrange it in some kind of miraculous way that is able to fight entropy enough and then the output of it is that we have delighted customers, like they’re doing things for people that they want to get done.

When we think about that, imagine like a restaurant owner– the guy owns the restaurant, he sees every customer, he can see the smile on their faces or when they’re pissed about something, he’s got the direct feedback. He’s almost like an insect and that the information is right there, but it can’t get above a certain size because otherwise it breaks down. Well, let’s think about what does work-from-home mean for this if we’re trying to process information. Think about a business as an information processing organism.

Well, there’s this famous 7% rule study that– it’s a little bit problematic in that, there’s been replication problems with it, but just as a thought experiment– 7% of communication is the words that you’re saying, 38% is the tone, and the other 55% is body language. Now, I don’t know about you, but on a Zoom call, okay, we have the words, we have the tone. I don’t know how much of the body language comes through in a Zoom call.