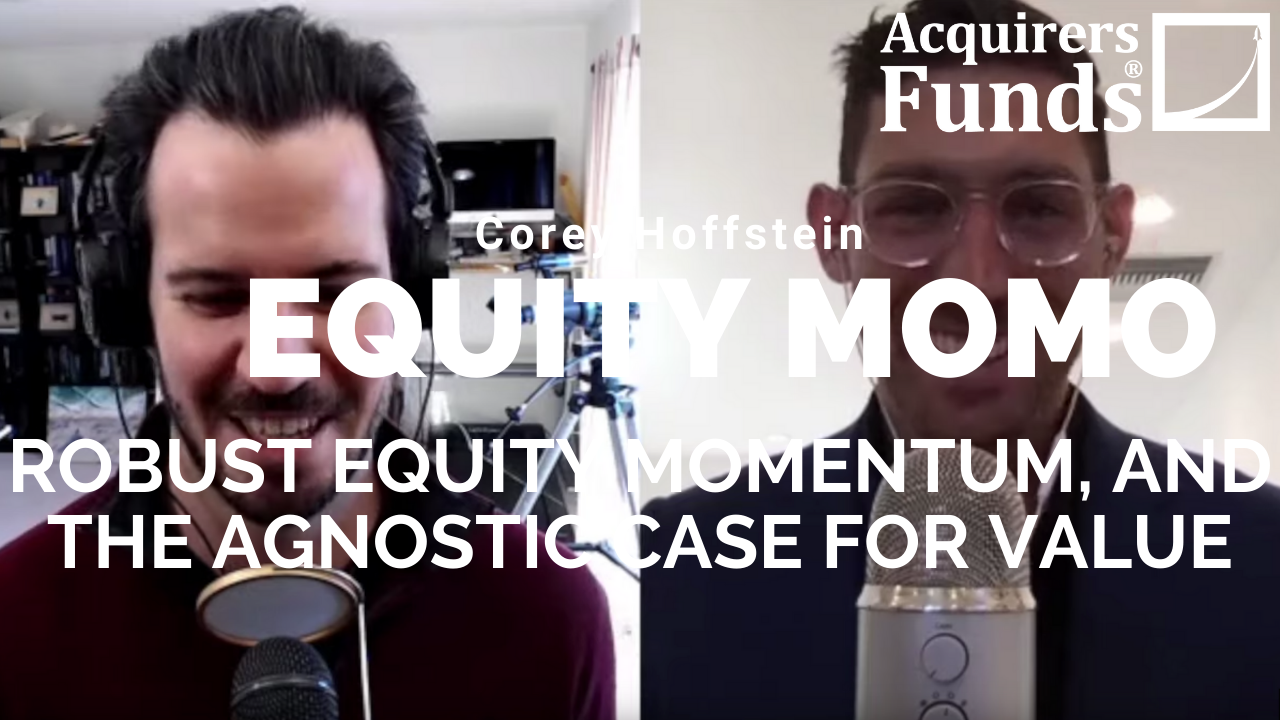 During his recent interview with Tobias, Corey Hoffstein, co-founder and Chief Investment Officer at Newfound Research discussed the agnostic’s case for value. Here’s an excerpt from the interview:

Tobias Carlisle: That sounds great. Oh man, you’ve got to help out long suffering value, guys. I’m looking for any kind of a cool drink of water in a long desert of underperformance of value. There are a couple of great things on your website that I love checking out pretty regular. I always look at the equity style dashboard. You’ve got a really great representation of what value has done, what size has done, what momentum has done, what people are actually investing in to implement those. Looking back over one year and three years, I think it’s a fantastic resource and I go there very regularly.

Tobias Carlisle: I also love your blog. So anytime you mention value, because I always think of you as your agnostic to any of the styles. So I want to see what are the guys who are agnostic, think about this thing that I’m a Jihadi in. So I loved your paper, “Should I Stay or Should I Growth Now?” What was the paper about?

Corey Hoffstein: Well, I should start by saying, I actually came up with a paper title before I came up with the paper.

Tobias Carlisle: Sometimes that happens, right? Now I got to write it.

Corey Hoffstein: It hit me in the shower and I was like, well now I have to write a paper about this. So we are not value managers, but that doesn’t mean that value doesn’t influence our process. In some of our tactical mandates, we take a sector-base approach to accessing the equity markets very specifically and equal sector weight approach tends to serve as our strategic basis.

Corey Hoffstein: And when you look over the last three, five, ten years, you’ve seen that basic equal sector weight approach has tracked the value premium very closely, did very well 2000 through 2007, 2008, did decently up until about 2011, 2013, and then basically has been a drag on portfolio performance ever since and very steep since 2018. So tracking value very closely. So it is one of these interesting things that while we don’t pick value securities, when you look at the market one way, you can actually be influenced by these other factors, what I consider to be these unintended bets.

Corey Hoffstein: So for us, we wanted to take a look at saying, well, if we know that value is a factor that we’re hitting unintentionally, value in size to a certain degree, when is this pain going to end? Right? We continued to report that this has been a drag on performance year, after year, after year at a certain point. After hitting your head against the wall that many times you have to ask, should we just do it differently?

Corey Hoffstein: For me it was trust but verify. I wanted to take a look myself. And very specifically what I wanted to look at was separating a little bit the difference between the academic implementation of a factor and the way an investor might look at a factor. So you mentioned we have this style dashboard. One of the things that’s really important to me is saying it’s not fair to me, as a quanta, to say, hey, by the way, values out of favor. This is the way I implement it. It is this long/short academic portfolio. And by the way, the way you’re going to access it through ETFs looks nothing like that. So my research isn’t even relevant to the way you’re going to buy this factor.

Corey Hoffstein: So what I wanted to do was try to replicate some of those ETF methodologies. What I would consider to be version one and version two methodologies, and we can talk about that and just simply ask, is value cheap? Does it look cheap historically? Has it been oversold relative to both the market and growth portfolios? And the idea of being, if it does look historically cheap, that there might be strong tailwinds that we can expect going forward as we would get a a reversion to fair valuation.

Tobias Carlisle: When you say oversold, you’re not using that in the technical sense of… I don’t know. I don’t actually know how that’s calculated, but that’s one of the overboard, oversold, like an RSI indicator or something like that?

Corey Hoffstein: Yeah, I mean relatively oversold, right? So if we think that prices are set at the margin by demand from investors that if investors are issuing value stocks for growth stocks, they’re going to relatively trade those down. You know, instead of buying value stocks, they’re buying growth stocks, which is going to increase the price of growth stocks and disfavor value stocks. So it’s really more of a relative spread. And then really what we’re trying to look for there is how does the price of buying that basket compare to the fundamentals you get and how is that tracked over time?

Tobias Carlisle: I thought it was a really interesting paper and it did sort of remind me a little bit of, or it looked a little bit at, Cliff Asness’ paper, which I thought was a particularly good one. Where he said, if we’re talking about the value factor strictly that’s price-to-book, it hasn’t worked for a really long period of time. Lots of folks who’ve looked at the reasons why. There’s various arguments, one is sort of that the world has moved away from a tangible asset to an intangible asset world.

Tobias Carlisle: Another one is just that buybacks have reduced the efficacy of the signal because companies that are very good tend to buy back a lot of stock and some of them have got negative book values.

Tobias Carlisle: Which McDonald’s is an example, it’s a very good company that has lots of free cashflow, buys back a lot of stock. So there’s no money invested in any more because it’s all been paid out, which is a great business and ultimately one you’d like to own. But it’s misclassified by price-to-book.

Tobias Carlisle: But then Cliff moved on and he said that’s not the way that it’s implemented for the most part. No value quant is using price-to-book or none who was still going anyway.