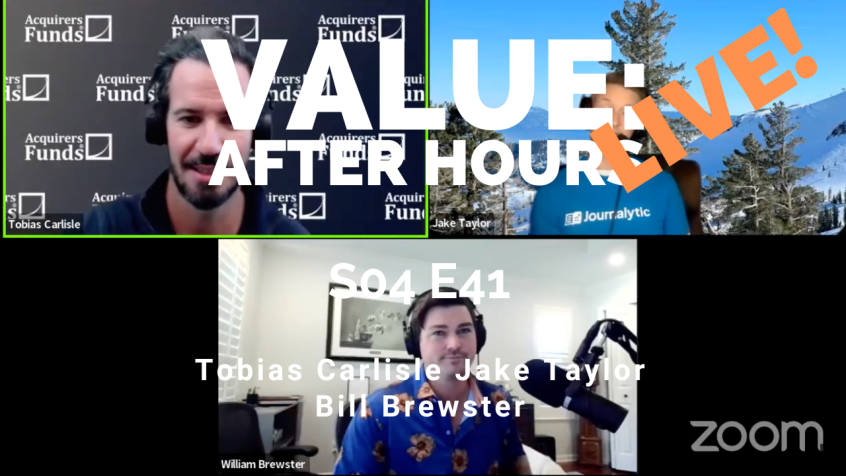 In their latest episode of the VALUE: After Hours Podcast, Brewster, Taylor, and Carlisle discuss The Diverse Nature Of Berkshire’s Stock Picks. Here’s an excerpt from the episode:

Tobias: I love when Buffett comes behind me picking up my trash like HPQ, LPX.

Bill: [crosstalk] Oh, did you own LPX? Well, I can’t even ask you that.

Jake: Was that– [crosstalk]

Tobias: I own LPX.

Tobias: I want to get a good one, having to buy a good one. Not happened yet.

Jake: Yeah. What do you think about?

Bill: Makes sense. There’ve been three issues on the show, geopolitical risk related, and I’ve said I don’t know how to handicap any of them and I’m not going to start now. [crosstalk] two, I think. Well, actually, I don’t know what we are on the China issue, but I’ve always thought it was too hard.

Tobias: Do you think that the main issue with that is geopolitical or do you think there’s a valuation issue? And is Buffett buying that answer that question?

Tobias: It was expensive every time I look that. I haven’t looked at that a year though.

Jake: I think it’s off some. So, it might be cheaper than you remember. But it is an interesting question to ask yourself, what would it be trading at if it was on US soil?

Jake: [laughs] So, therefore, if you frame it that way, is the discount appropriate?

Tobias: Are we see there’s a discount in it?

Jake: Well, relative to if it wasn’t just geopolitically risky.

Jake: A lot of re-investment, right?

Tobias: I find Berkshire’s buys interesting. They do seem to spend– On one hand, they’re buying LPX, which is a very traditional deep value type pick.

Tobias: And then, on the other hand is TSMC, which is a compound probably off the end of what I would be prepared to pay for something like that.

Jake: Well, it might be kind of GARP, right?

Bill: But I think LPX, you’re dealing with, what, OSB and then this– Basically, it’s commodity plywood and then they’ve got this siding product. I did some work on the siding product. And the guy that I talked to was like, “Yeah, it’s pretty commoditized.” [crosstalk]

Tobias: But as we discussed before, two times earnings.

Bill: I don’t know what the normalization is. But I think you have to pay a cheap price for that kind of a business.

Tobias: Yeah. That’s why I just think it’s interesting to have those two picks in there.

Tobias: Plus, Amazon. Remember, Amazon that was a year ago or something like that? A little bit more than– [crosstalk]

Bill: And Restoration Hardware, they bought more of. It seems like they are buyers of the structural bull housing thesis.

Jake: I guess Clayton has been doing really well. So, I don’t know. Maybe there’s–

Bill: Well, the more unaffordable homes get, the better Clayton is as a value proposition.

Tobias: I saw somebody say that they might have had some insight into TSMC because of Apple. Apparently, Apple buys all of their inventory. Does that make sense?

Tobias: I saw the tweet. I’m regurgitating tweets. It’s like me retweeting something. I’m retweeting it on a podcast.

Tobias: I try to let everybody know when I’m retweeting. Just some random dude I found on Twitter said something, for what it worth.