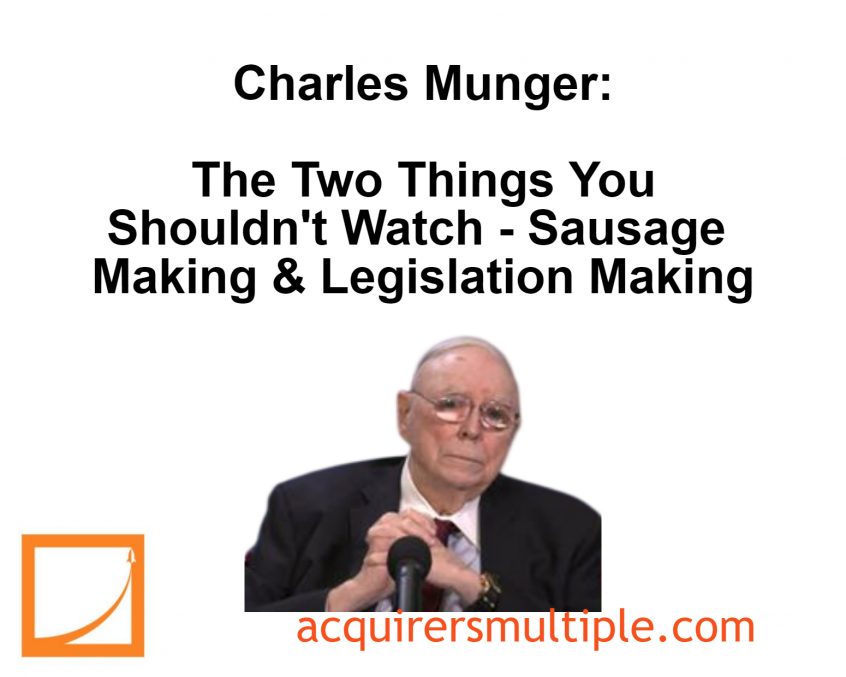 During the 2010 Berkshire Annual Meeting, Charles Munger quoted Otto von Bismarck on the two things you shouldn’t watch – sausage making and legislation making. Here’s an excerpt from the meeting:

WARREN BUFFETT: Everybody should read chapter 12. It’s a little — it starts a little slow in the first few pages.

But Keynes — I’m going to read this because I don’t think Charlie has it in front of him.

The first part of it is very familiar to people. I mean, this quote has been used a lot. But every word in this, to me, is right on the money.

“Speculators may do no harm as bubbles on a steady stream of enterprise. But the position is serious when enterprise becomes the bubble on a whirlpool of speculation.”

You can change that to “gambling” if you want to.

“When the capital development of a country becomes a by-product of the activities of a casino, the job is likely to be ill-done.” That’s the famous part of the quote.

Keynes went on to say, “The measure of success attained by Wall Street, regarded as an institution of which the proper social purpose is to direct new investment into the most profitable channels in terms of future yield, cannot be claimed as one of the outstanding triumphs of laissez-faire capitalism – which is not surprising, if I am right in thinking that the best brains of Wall Street have been in fact directed towards a different object.”

That was written in 1935. I don’t think there’s been anything better written about how government, how citizens, should look at Wall Street and what it does and it doesn’t.

It’s always had this mixture of a casino operation and a very socially important operation.

And I witnessed that and it drove me crazy.

But in 1982, Congress was considering, really, the expansion of a derivative contract to the general public in a huge, publicized way. It was the S&P 500 contract. That changed the whole derivatives game.

At that point, basically, Wall Street just said, “Come on in, and everybody can speculate in an index. Not any real company, just an index. And you can buy it at 10 o’clock in the morning and sell it at 10:01, and you’re contributing to this wonderful society by doing it.”

And I wrote a letter to Congressman Dingle, and we’ll put up exhibit 5. I just excerpted a few of the statements I made there. This was one month before they put in trading in the S&P 500, April. They put it in April, 1982, in Chicago; did a little in Kansas City first.

And I went through four pages of things and I just pulled out a few things. But I think that, to some extent, what I forecasted then has turned out to be the case.

And then it got squared and all of that, as both the people in Wall Street kept dreaming up new and new ways for people to gamble.

And as I say, academia was applauding all along the way and getting hired as consultants to various exchanges to tell them how wonderful they were, in terms of their social purpose.

I think that — well, it’s up there for you to read. I’d be glad — the whole letter was reprinted, I believe, in Fortune at one time, Carol. Was it—?

CHARLIE MUNGER: By the way, if I remember right, this was like the only letter in opposition to this uniformly acclaimed new world of better gambling in things related to securities. Warren wrote the letter —

WARREN BUFFETT: And it’s a —

CHARLIE MUNGER: — all those years ago, and it was the only letter —

CHARLIE MUNGER: He basically said the idea’s insane. It will do more harm than good. Then, as now, people didn’t pay that much attention to him.

WARREN BUFFETT: And I’ll venture that very few people in this room know — you all know that if you buy a stock, you have to hold it for a very long period of time to get a special capital gains treatment on it.

So you really get better tax treatment if you’re gambling on an S&P 500 derivative, which is what it is, in Chicago, than you do if you invest for four or five months in some security and then have to sell it for some reason.

It’s a tribute to the lobbying power of a rather small group that has done very well off this particular activity.

Charlie, can you think of any reason why it’s 60 percent long-term gain if you hold something for 30 seconds? (Laughs)

But if a small group with a lot of money and influence cares a great deal about something and the rest of us are indifferent, why, they tend to win before our legislative bodies.

That’s just the way it is. I always liked Bismarck’s remark that you shouldn’t watch two things: sausage making and legislation making. (Laughter)