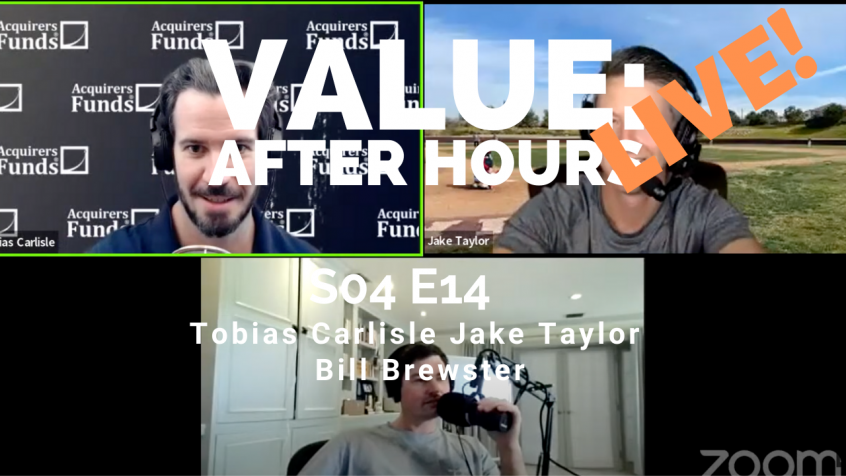 In their  latest episode of the VALUE: After Hours Podcast, Taylor, Brewster, and Carlisle discuss Elon Musk Twitter Activism. Here’s an excerpt from the episode:

Tobias: What’s the most pressing thing? Elon buying Twitter? Is that the biggest flex we’ve seen so far?

Bill: Yeah. It’s the biggest news of the week, I think.

Jake: [crosstalk] what is a second-class citizen board member? I don’t know what that means.

Bill: Nice to be done by somebody who cares about Twitter.

Tobias: Well, someone who use– [crosstalk]

Bill: But not certain Jack does. Yeah.

Tobias: I saw a funny tweet, where someone said, “I wish that the directors actually used Twitter and then the next thing was like monkeys palm closes. Monkeys finger goes down.” [chuckles] He’s the best Twitter user I’ve seen. It’s probably the biggest account. It makes sense that he’s actually in there. He uses it.

Bill: Well, there’re a number of things. One, it seems to me that guys that get in power want control of a media outlet and he just bought his way onto the board of the most powerful media outlet in the world. So, that makes sense. Two, he probably got insurance from getting kicked off. And three, I wish that the people that worked at Twitter use Twitter. Forget the board.

Bill: Those are some of my thoughts?

Jake: Oh. Is he going to get an edit button added? That’s what everyone wants to know.

Bill: I hope not.

Tobias: Yeah, I don’t want an edit button either. It’s just too open to abuse, unless, there’s some way of tracking the edits.

Bill: Well, I don’t know. The guy I think he goes by Bos. What the hell’s his name? Bosworth. At Facebook, we did this and you can see if a tweet has been edited or whatever, it’s like, once something goes viral, somebody edits it, then, you’re going to have to click on it to see which version went viral. No, just leave it be– [crosstalk]

Jake: [crosstalk] too lazy for that.

Bill: If people don’t like it, delete your tweet. I don’t know. I’ve gone back and forth on the edit button and I’m squarely against it now.

Tobias: You think it’s a weird filing that it was a passive filing, and then it’s been added to the board, and it’s had a sign of standstill and all these other things?

Tobias: It was a little bit quiet, too?

Tobias: That’s the most active passive filing I’ve ever seen.

Tobias: It is Elon. They said, they’ve been talking to him before the filing?

Bill: Yeah. I assume a guy like that can get somebody on the phone when he wants them.

Jake: Did you sell Elon, his shares?

Jake: Okay. That would have been fun.

Bill: No, there would not have been.

Bill: I really would have been mad at myself.

Bill: I don’t know. We’ll see. I don’t see how Elon on the board really does much to change Twitter, but maybe I’m wrong. The stock price seems to be reacting positively. I do want to buy some YOLO calls in case it turns into a meme stock.

Tobias: On your comment before about guys getting powerful than buying a mouthpiece, in someway is this sort of the reverse of what he’s doing. He’s trying to get– Well, we’ll think that he ran the poll that said, “Do you think that the Twitter has too many restrictions on free speech?” It was overwhelmingly 70% yes, 30% no. If anything, what he’s going to do or the mandate that everybody seems to think that he has is to go in and take off all of this, [unintelligible [00:07:41]?

Bill: Oh, it depends, would he believe what you’re seeing?

Bill: No, look, I don’t doubt that that’s what his tweet said and that’s what the poll said. I don’t know enough about him to know what he’s thinking behind that tweet.

Jake: I think more people imagining that he was going to be starting his own competing network. Wasn’t that–?

Bill: Yeah. Me and Akram’s Razor, we were on a space on Tuesday wondering if he was going to buy clubhouse and try to start something over that. It turns out I think he made the right decision just bought into Twitter, but I don’t know. I just don’t trust what I see. I don’t know what else to tell you.

Tobias: Twitter seems to be like, you’re almost buying it at a discount to what it cost you to put it together until like it’s not so much the coding it up and getting everybody to use it. There are heaps of competing like Twitter kind of clones out there. I don’t know. We’re just going to have this complete balkanization where everybody who’s one political persuasion goes to one and everybody who’s the other political persuasion goes to the other.

Jake: That should help us meet in the middle. [laughs]

Bill: I think it’s all just going to stay on Twitter.

Tobias: Because there’s just nobody on those other ones, I don’t know.

Bill: Yeah. No, you know. Didn’t Truth Social just shut down? I think it did.

Tobias: Which one was that?

Bill: I thought that that was the DWAC. Well, maybe it wasn’t the DWAC one, but hang on.

Bill: Yeah, I don’t know. I guess, Trump’s Truth Social’s still facing financial and technical– Technical, was looks like a bus so far.

Bill: Yeah. It’s hard to start up a network, man. It’s not so easy. It’s part of the problem with Super Follows, especially if you’re me and you have nothing really intelligent to say. It’s hard to drive a conversation to a secondary network.

Tobias: What is a Super Follow? What does that do?

Bill: Well, if I had product knowledge or something, I would maybe be dumping some knowledge behind a paywall, and then, you have a secondary Twitter feed, and [crosstalk] apparently, some people are smarter than me that can maximize it.

Jake: You give us all the gems here for free.

Bill: I also don’t have any gems, so that helps.

Tobias: Yeah, it seems like Twitter– I don’t know how you fix Twitter, but it seems there’s something wrong with it. It’s comically small relative to the other social networks. It’s hard to use when you first get on it, but once you use it, it’s highly addictive and it functions as it’s the newsfeed, it’s the way to communicate with people, you can find your little tribe.

Jake: 10x useful. LinkedIn for that type of networking, I mean.

Tobias: It’s strange that just can’t figure it out. I don’t know. It doesn’t seem that hard for– [laughs]

Tobias: Although, people have figured it out.

Bill: I think they’re in the process of figuring some of it out, but they got–

Bill: Well, I think they’re subscale. I think they’re SG&A. Look, the revenues have gone from $3 billion in 2018 to $5 billion in 2021. That’s a real company. Whether or not it’s a public stock you want to own, it is a different conversation. But I think if I created a business that had $5 billion in revenue, I’d probably be like, “Fuck you. What have you done? You go create something with $5 billion and tell me that I didn’t figure something out.”

Jake: What’s the revenue on Facebook right now per year?

Jake: They basically have Twitter’s revenue and I don’t know, what is that? Three weeks or something? [laughs]

Tobias: It’s funny how much– [crosstalk]

Bill: They don’t even monetize WhatsApp.

Tobias: Jack’s tweeting got so much better when he left Twitter. What’s that about? There’re some restraints when you’re on the board. Maybe, I don’t know. I don’t know why you would– [crosstalk]

Bill: I guarantee you, Elon isn’t going to use restraint.

Jake: Yeah, he’s already supposed to have that. That’s not a thing.

Bill: Yeah. I don’t know why Jack didn’t use Twitter when he was on Twitter’s board. That was frustrating as someone who cares about how Twitter does.

Tobias: Good comment here from Gaurav Sharma. “Weibo Twitter of China is also in the same boat indicating it’s a universal problem.” Yeah, what is the problem? The reason why Instagram and TikTok have exploded is because they’re much more visual. They’re just all visual.

Tobias: Which tweet are you going to read? So, right away, people were like, “Ah, too hard.”

Jake: This is a family program after all.

Tobias: Twitter could be doing the same thing though couldn’t it. [crosstalk]

Bill: I don’t think so. You just sell into people’s heads [crosstalk] the head you use.

Tobias: But you could make it visual. You could make your own account visual and you just attach a picture to every single one.

Jake: What does seem like, if you add content like that those tweets tend to do better than just the word ones. I think they push those more behind the scenes.

Bill: Yeah. The other thing is, Facebook was set up from the jump to collect information and Twitter really wasn’t.

Tobias: It’s weird. Because you’re talking the whole time, you’re telling everybody what you feel. What you’re thinking about, what you’re interested in all the time, it should be pretty easy.

Bill: Yeah, you would think.

Tobias: It’s easier than trying to figure out what a picture means.

Bill: It turns out, they need credit card data and then third parties to tell them what you want, rather than the interest graph that you’ve created for them.

Jake: Like billions of things that have been like that should give you exactly pinpoint what you’re into.

Tobias: Yeah. You think it would be, I don’t know.

Jake: Classic cars, stocks that go down, and–

Jake: Yeah, that checks all the boxes.

Bill: Yeah, just start advertising to me. It’s not very different and weed.

Bill: Which they can’t advertise yet, but maybe someday.