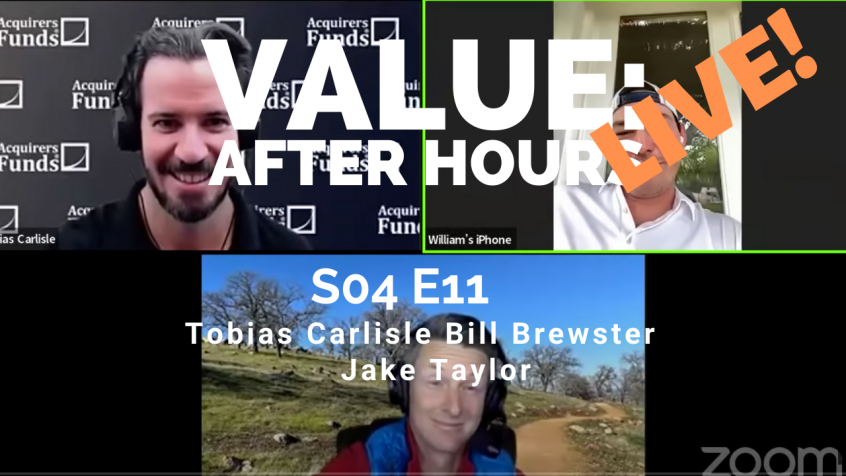 In their  latest episode of the VALUE: After Hours Podcast, Taylor, Brewster, and Carlisle discuss The Importance Of Surrendering In Investing. Here’s an excerpt from the episode:

Jake: I think some of the investment takeaways from that are obvious that we don’t have control over a lot of things, we don’t have control over all this macro stuff that we’ve been talking about for the last half hour. We have to surrender to that a little bit and just recognize reality, put our egos away of thinking that we could maybe even untangle some of the stuff, because it’s just so hard.

Jake: I thought it was maybe a good thing to talk about today when the world is especially noisy with all the things that are happening, and putting some of our own egos away, and just being reminded that sometimes, we have to surrender a little bit to follow our best process, do the work on our desk, do the best that we can, and let the chips fall where they may.

Tobias: I like it. I like the approach. I think one of the things that we’ve been talking about is how good value is usually at leading the way. if you’re finding something that’s bombed out and undervalued, it’s probably a good time to be spending some time in the sector. Then, two or three years, sometimes, they come rolling back.

Jake: You’re really smart like we’re prescient about something [crosstalk] going to change.

Tobias: Yeah, like you’re good macro investor just by being a value guy looking at stuff that’s– The only reason you’re there is because it’s undervalued. Not because you’ve got any particular view about the future. It’s just that seems to be the way that the cycle works. When the capital drains away from something, that’s a good time to go and look at it. Then as the capital comes back in you, you’re a vendor and you’re moving on to the next thing.

Jake: Yeah, I think there’s a lot of truth to that.

Bill: I’d like to know, I guess, historically, it seems to me that quality is the place to be in the beginning of a downturn and values what you want to buy on the backend. I don’t know. Quality in Poland, I think right now is probably a pretty good idea, because if Poland gets attacked, it’s not going to matter what stocks you own. I don’t know. The only thing I don’t like about this attitude is, I think some people take it too far and they’re like just surrender. Maybe I’m just talking about my own personal life and what people around me tell me. But it seems like a little too pacifist for my liking.

Jake: Yeah, I do. I struggle with that a little bit, too. Because there’s this narrative, often, I think that gets assigned of grinding it out, and grab the bull by the horns, and seize the day, and all these different cliches that we would probably all think would be precursors of success. But I don’t know. I think that can also, maybe balance is the answer always and finding that middle path.

Jake: Even when it sucks.

Tobias: Yeah, you can push through. The bit that we skidded over there is the part where he said, “This guy owns a house out in the middle of nowhere, and he goes and buys a computer, and then teaches himself the code, and then codes up that thing.”

That’s a pretty big leap to have done that and that requires some intense study, intense concentration, focus for an extended period of time to teach yourself how to code and that all business, all coding too, and then to turn that into some software package that functions reasonably well. That’s quite a big leap. He had that advantage. When I hear it, that’s the way that I interpret it. Your interest is directed somewhere and you keep on working on that, whether you ultimately make money out of it.

Paul Graham calls it “the bus ticket collector phenomenon,” where there are guys out there collecting bus tickets and they do it because they’re interested. They’re not trying to make money at it. That’s the, the analogy that he gives. But there are lots of other advantages of that. I feel a bit bad. I’ve been shitting on NFTs here for a little while, but I do think that NFTs will have a great deal of utility at some point. I’m just laughing at the spending large amounts of money on the JPEGs. But it’s entirely possible someone digs into NFTs, they’ll find some use case for it, and it’ll take off and be huge. So, that’s the way I interpret it.

Jake: Yeah, I think that is not to be missed that hard work. It’s not surrender and then go sit on the couch and watch Netflix. I don’t think what was happening there. I think his isolation and insolation is probably led to a lot of success because it allowed him to have that extreme focus on what he was working on.