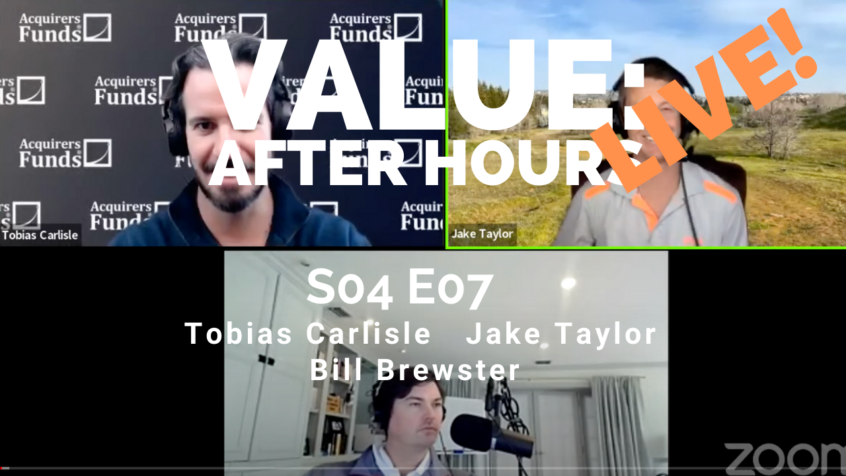 In their  latest episode of the VALUE: After Hours Podcast, Taylor, Brewster, and Carlisle discuss Munger Using Margin To Buy Alibaba. Here’s an excerpt from the episode:

Tobias: Why is Munger using margin to buy Baba? I don’t think that he has used margin specifically to buy Alibaba. I think that they have margin on that account when he was talking about that a little bit, I think.

Tobias: JT, do you know that?

Jake: [laughs] Not going to respond. Not confirm or deny. My understanding was that there was already margin used in their account. So, I don’t think there was a like for like kind of, “Oh, we took margin to go by this particular thing.” But I don’t know. Do your own homework.

Tobias: Did you guys read Seth Klarman’s most recent letter?

Jake: [crosstalk] a lot of doom and gloom.

Tobias: Well, they’ve had their best year in a decade or something like that. I don’t know. They’re not doing a lot in public equities these days. Most of its private [crosstalk] stuff.

Tobias: I find all those letters– I’ve just read so many letters now that it’s very rare that you see something new in a letter– I find you could feed all Klarman’s letters into a–

Jake: Algo, and then it just spits that same–

Tobias: And written the same letter.

Bill: It looks like the homie, Bill is saying that in the 10-Q, it says that Charlie use margin. I have not read the Daily Journal. Thank you. I don’t care very much what it has to say, to be perfectly candid.

Tobias: Oh, he borrowed $37 million in the latest year to buy Baba.

Bill: Dude, obviously, he thinks the stock’s going up and his other securities are not going to implode. Otherwise, he got himself in a margin call.

Tobias: That is true.

Jake: Counts vigorously, I believe was his advice.

Bill: I don’t know his thesis. I don’t know why he’s so comfortable. Look, my thoughts on why he’s using margin, I don’t know, dude. He is Charlie Munger. He’s a savant. I’m an idiot. He probably sees something I don’t.

Jake: I was thinking about that the other day when I just happened to come across one of the AGMs and Munger was actually talking about Buffett, like how weird he is to everybody. He asks like, “Hey, Warren, didn’t you try to buy a town when you were 21 years old?”

Jake: And Warren’s like, “Oh, yeah, I did try that but I didn’t go through.” None of us were trying to buy a town when we were 21 years old. This guy is just different level than everybody. So, to think like, “Oh, I’m going to be the next–” Come on, get out of here with that.

Bill: The other thing is, the thing about Daily Journal, this is the risk with any corporation that somebody’s got control of. If you don’t like what he’s doing, you can sell the stock. But expecting Charlie not to be Charlie, I don’t think is very fair. Charlie’s going to do whatever Charlie wants to do. If you disagree, sell. I probably would have sold when they had all that shit with the Buffalo News. I probably would have been like, “What are these two guys doing incinerating cash on fire fighting a newspaper war?” You don’t like it, leave. If you trust them, trust them.

Bill: The beauty of liquidity.

Tobias: The Chinese accounting for Alibaba. There’s some websites that track Alibaba’s filings that are hilarious and make it hard to invest in Alibaba, even though optically it’s cheap. I don’t know. Charlie’s got some additional help there from Li Lu, I’m sure. So, it’s probably a good trade.

Tobias: How you come [crosstalk] them?

Tobias: Is it live or is it dial-in?

Jake: I think it’s on Yahoo broadcast, but I don’t know how you would try to ask a question.

Bill: I’m sorry, if I was curt with the Daily Journal thing, but I just don’t know and I just really do think any controlled company, you’re at risk of the person that’s in the driver’s seat go in a direction that you don’t want to go.