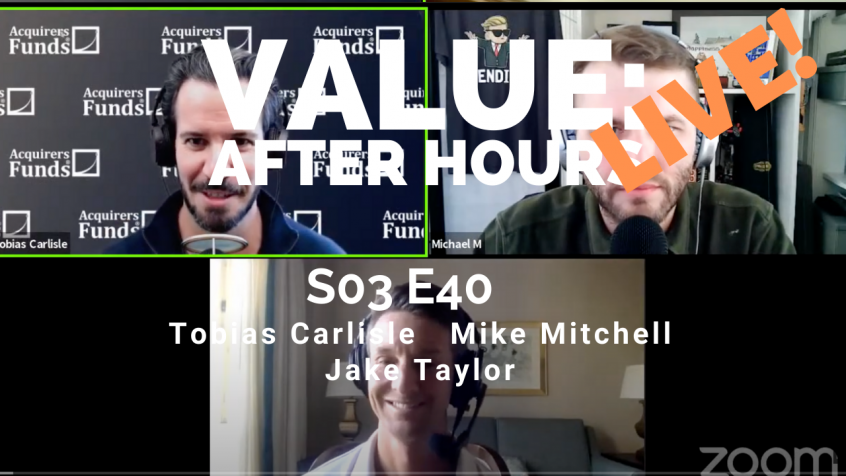 In their recent episode of the VALUE: After Hours Podcast, Jake Taylor, Mike Mitchell, and Tobias Carlisle discussed Wu Wei Investing. Here’s an excerpt from the episode:

Jake: Oh, yeah, let’s do it. Yeah, let’s get deep in some Eastern philosophy to close out the hour. This concept of Wu Wei, which if you want to look it up, it’s not– It’s spelled W-U and then W-E-I. I’m going to start out by reading a little passage from Tao of Pooh, which is like this book about Winnie the Pooh.

Jake: But it explains Eastern philosophy because that’s where I have to start, [laughs] paint by numbers. So, here’s what it says. When we learn to work with our own inner nature, and with the natural laws operating around us, we reached the level of Wu Wei. Then, we work with the natural order of things and operate on the principle of minimal effort. Since the natural world follows that principle, it does not make mistakes. Mistakes are made or imagined by man, the creature with the overloaded brain who separates himself with the supporting network of natural laws by interfering and trying too hard.

So, first of all, that’s a really nice little passage, but it’s very hard to explain Wu Wei. Because you can take so many different angles on it, but I’m going to read some of them and see if any of these resonate. One definition might be the alignment with the rhythms of the elements. Effortless surrender to natural cycles of the world, ultimate energy of the universe, that the drift of nature, others kind of put it more as like nonaction, which kind of sounds like laziness on one level, but I think it’s more that like you work hard when you’re in the flow, but you don’t fight it if you’re not.

There’s this Lao Tzu quote that says, “Nature never hurries, yet everything is accomplished.” There’s also I think some elements of authenticity to it. Don’t try so hard not to be yourself. So, that to me is represented– I watched The Big Lebowski again recently, and just the idea of like, the Dude abides. I love that. It’s so pithy and good. But really, this is why I often look to nature for some of the bigger truths, because there is an energy to it, there are cycles to it, and I think there’s a lot that we can learn and try to sync ourselves up with that. Anything you guys that you want to add at this point before I go into what I think maybe some of the implications are of this?

Tobias: The way that I have understood it is just that there is an objective reality and there is a way that things are going to unfold. The better you are able to understand it and to align yourself with the way that things are going to unfold, the easier everything is. I think that the analogy that I like is just, if you’re at the beach and there’s a tide, you can float in the water and go with the tide, and you go a long way down the beach, and you can swim against that tide and stay where you are and put out a huge amount of effort. Provided the tide is going in the direction that you want to go, it might be easier just to sit in the tide. If you swim with it, you go even faster. But the idea is that you figure out what has happened, what is likely to happen, and you just sort of go with it.

Jake: Yeah. From a business standpoint, I think finding the businesses that are operating with a win-win mentality with all of their counterparties are going with the tide of recognizing this universal principle of reciprocity, and that is one of the ways in which to be in WU Wei. I think capital cycle theory makes sense to me from a Wu Wei standpoint of there are natural ebbs and flows as capitalism moves from glut to not enough, and works its way around and through equilibrium and just understanding that that’s going to happen and not drawing straight lines and projecting them off will give you quite a bit of an advantage. Even just trend following to me sounds like it’s sort of Wu Wei. I know a lot of value guys will turn their nose up to that kind of thing, and I personally do not engage in trend following. However, that doesn’t mean that there’s not one way to think it works and it probably– [crosstalk]

Tobias: Well, momentum, right? Momentum is a pretty well-documented quantitative phenomenon that seems to be more robust than value. I saw Corey Hoffstein was here.

Jake: How dare you, Toby?

Tobias: Corey might be able to shed some more light on it, but I forget who said this but it was a pretty great point that they made that if you’re in a market where tech is trending and that’s going to go on for a decade and you’re in momentum riding the tech, and then the market breaks down and it turns into lumber, oil, and gas, those become a momentum. This is what’s happened over the last 12 months as value has slowly gradually started to become momentum. The momentum guys haven’t had to make any great switch to their strategy. No, they’re already in the thing that started working again and they’re going to be okay.

Jake: Yeah. You think about like how Munger runs Daily Journals portfolio and just how opportunistic he is. He is not forcing it. One, he just waits until there’s something very obvious to do and otherwise he’s not swimming against any tide there.

Tobias: It’s a difficulty ride. It’s separating out things that are very obvious from the things that aren’t because everybody sees those very obvious traits once every five years or so. You just see something but you’re like, “Well, it’s everything that I understand, and it’s way too cheap. I don’t know how this is going to work out.” But there’s a lot of ones that feel like that don’t quite get there.

Jake: It’s the nonaction that’s harder than the action.

Jake: I think another thing is that your investment style has to match your inner nature, and you have to be congruent with that, and really understand yourself and where your strengths are, and your personality type and the EQ side of this whole game has to be at one. Sometimes, if we don’t match ourselves with the external energies, then you’re just going to be forcing it. I think it’s a good exercise for all of us really to ask, where in my life am I rowing against the current where if I was to think of it instead of putting up the sail and going with the flow, it would be so much easier? So, that wraps up a little bit of Wu Wei.