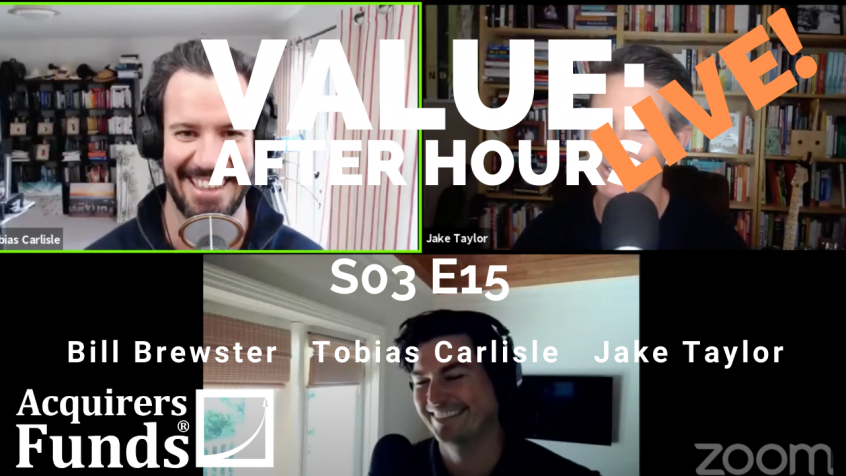 In their recent episode of the VALUE: After Hours Podcast, Taylor, Brewster, and Carlisle discussed Options Are Dangerous. Here’s an excerpt from the episode:

Tobias: I think if it’s your first time in options, the things you’ve got to be careful, there’s a massive bid ask spread. You’re going to lose the money in the spread. The second thing to be careful of is that if you’re short of an option, you can lose a large amount of money being short an option, much bigger than the amount of money that you put up. So, probably you want to be long options until you really know what you’re doing. Even then, you can vaporize a lot of money, but at least you can only lose what you put up.

Jake: Which is kind of a mind F when people first get in there.

Tobias: You need to understand volatility in some of the [unintelligible [00:30:39].

Bill: Anyway, you know what I’m saying. You’ve got to make sure that you figure out– I guess you didn’t lose everything, because it was worth it. Anyway, you didn’t make what you thought you were going to make.

Tobias: I do think there are some spots where if you’re a value investor, if you’re a fundamental investor, you do have an edge over the people who are trading them mathematically. I think that that’s in LEAPS, you can get that edge, because you can have a view on the fundamentals where– there’s a good discussion of it in The Big Short, where they talk about their options that were priced as if they have a normal distribution, and these guys had a view that they really had a– there were two outcomes possible. There was either win a lot, or lose a lot.

Once you have that framework, you can Kelly bet those positions. If you have enough of them, you should have a positive expected return over time. It requires some sophistication to get to the point where you’re finding these things that are binomial bets where the normal distribution price offered. Then, I also think that there are– with a LEAP, with a fundamental, there’s no volatility in the stock, the stocks very, very cheap, hasn’t done anything for a long time. Underlying’s been doing pretty well. You can put on a small position at the money. Two years later, you can make quite a lot of money on those things, but you’ve got to be prepared to vaporize the lot. You’ve got to think about the amount of money that you’re putting on as pure risk capital, not like a stock where there’s still going to be some underlying value over time.

Bill: I’ll tell you what’s interesting is when you guys were saying that Intel was really cheap, and I was like, “I don’t know, I don’t know.” Since then, if he had bought the options, he would have done pretty well. That might be a scenario that– I’d be interested in LEAPS in that scenario, because the concern on that name, I think, is that they’ve fallen behind technically but you may be able to get some of the upside. I haven’t done the work to know if the options were mispriced. I could see myself– because then you could get more upside with putting less at risk. In a LEAP, you’re not going to like– it’s not going to bleed to zero tomorrow. You’ve got two years where you can still sell it with some time in it.

Tobias: They’re very illiquid. You’re probably not going to be able to get out of them, unless the market moves well into your favor, and you move well into the money. That’s why I like at the money or like one strike out of the money with two years to run, and the amount of money that you’re prepared to lose in that position. If it works, you capture all the upside, and if it doesn’t work, then you already know how much you’re going to lose, and you’ve got two years for– [crosstalk]

Bill: You would think about it if you were like, “Okay, well, this is a position that I’m willing to lose 1%,” and then you would say, “All right, I’ll put 1% in these LEAPS, and if it goes to zero, that’s what I was willing to risk anyway?”

Tobias: That’s a complete rip-off of Greenblatt’s strategy, which he discusses in The Yellow Book where he says, “If you’ve got something and you think that the downside is potentially a doughnut,” or it’s got big downside, then you’re already in a sort of option, like, pay off. Just focus a little bit more with the option and think about what you can lose in it.

Jake: You’re in an option probability set, but you want to get the option payoff structure.

Bill: You know how I’d screw myself on that? I’d sell the front month option trying to harvest–

Bill: [crosstalk] Yeah, just like a little extra premium, and then it would rip and I’d be like, “Fuck.”

Jake: Hedge myself right into a loss.

Tobias: I’ve never done anything smart hedging options or trading options around like that. Every time I ding myself up, it’s because I’ve been trying to do spreads or calls or something smart in there.

Bill: Yeah, I’ve always like– [crosstalk] What did you say? Call what?

Tobias: Call reapers. I’ve been doing spreads or call reapers, something like that.

Tobias: I might be short the front month and long the second month or whatever– [crosstalk]

Tobias: I love the idea too. I’ve just never managed to do it successfully.

Bill: Yeah, neither have I, man. I tried when I was in law school, I probably spent as much time studying options trading that second year as I did studying law school.

Tobias: You’re just lucky there was no Robinhood back then.

Bill: Yeah, well, my tuition in law school increased as my losses and options increased–

Bill: [crosstalk] -wasn’t very good at it. That’s why I don’t touch them anymore for the most part. I guess I’d sell a covered call on a–

Bill: Yeah. If you wanted to trim up a position, I could see emotionally saying that it makes some sense to sell a call, because it’s easier to deal with, but I don’t know.

Tobias: I honestly think if you’re in something like you just– if it’s a Berkshire, and it goes down and gets a lot of vol in it, I would sell a put in that instance, but it’s because I’m prepared to accept Berkshire downside, equity downside.

Tobias: There’s probably never going to be enough vol in Berkshire, to be fair.

Bill: I shouldn’t say at the bottom. Let’s say February 2020. Once it started to–[crosstalk]

Tobias: Well, that probably would have hurt.

Bill: Yeah, you get put it. Well, that’s the danger of that game, right?

Tobias: That’s okay. If you’re happy to take it then-

Bill: You got to have the cash to collateral, like, you’d be willing to cover[?] the table to buy your position. So, your cash is suboptimally used.

Tobias: I think we just did.

Tobias: That’s everything I know.

Bill: I have a feeling it’s not.

Bill: This is actually part of what we connected over at Berkshire. We were talking about–

Tobias: I’ll take [crosstalk] for that.

Bill: I remember it vividly until I don’t, until everything went dark at a bar screaming. Those were the days.