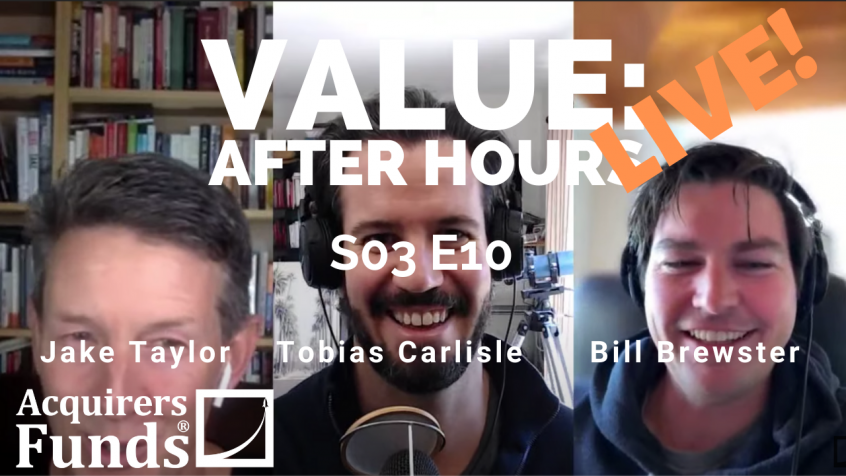 During their recent episode of the VALUE: After Hours Podcast, Taylor, Brewster, and Carlisle discussed Small, Cheap, Junk Rally. Here’s an excerpt from the podcast:

Tobias: There are big moves going on under the surface of the market, the market at the moment is basically at all-time highs. It fell off and it had a couple of days’ rally, so it’s back to all-time highs, and then tech is up, ARK and Tesla are up a lot today. I don’t know about ARK, but Tesla is up close to 20% of the day, which is a big move, particularly in a stock that big. But then, there’s been a lot of talk in that momentum strategies are going to have their biggest turnover in a very long period of time where they’re now going to start picking up some of the fins and some of the energy. I just wonder what that– all of this turmoil under the surface, it’s not really being reflected in the market at all. I just wonder what– that’s part of my confusion. When I look at what’s been working over the last probably since November, it’s been small, cheap junk from what I can see. That sort of helps some of the stuff that I do and hurts some of the stuff that I do. I wouldn’t say that value has started ripping just yet.

Jake: How does that work with those momentum strategies? I’ve heard this argument that’s going to turn over soon. Isn’t there somebody who does the momentum on a slightly shorter timescale that tries to front run the other person, and you just get this Red Queen effect?

Tobias: There are lots of implementations of it. It depends on what they look– they could be looking back 12 months, or 9 months, or 6 months, or 3 months, or some blend of that, and turning over portions of the stock that could be doing on an absolute basis, looking at what’s up the most. They could be doing it on a relative– absolute basis, looking back over a fixed period of time relative basis. There are so many different implementations of it. It’s like value, there’s so many different implementations. You can’t really use it as a monolith, you have to look at the detail, but it does seem that the stocks that are up the most are the ones that are going to be going in, which means that they get continued buying for a little bit longer, at least.

I think it’s a funny market, because I’ve heard some talk about the reopening trade. When I look at the stocks that are in the reopening trade, airlines and cruise lines, and things like that, their stock prices might not have fully recovered, but they’ve all taken on so much debt that the EV’s are way, way up, enterprise values are way, way up. Then, the load factors are still in the toilet, and I don’t see how– If you’ve got an EV that’s higher than it was in March last year, or pre the selloff, and you load factors weigh down, it’s going to take probably years to recover. I don’t see how they can be trading where they are, it just makes no sense to me.

Jake: You’ve got to look out really far probably to get comfortable because not only do you need the economics to return to the business, the operational leverage, but you also need to pay off all the people you put in front of you in line to get paid as these debt holders. You have to do something with them as well. You’re looking through multiple levels of cash flow changes to get to where you get paid as the owner of the business.

Tobias: Yeah. I don’t know if people would put up with the lockdowns again, but yeah. It was a fact of life. You can read Casanova’s autobiography. He talks about when you went from one Italian city to another, you were in quarantine. He very sneakily figured out how to get around and he told the bloke who was in charge of quarantine and he said, “That’s impossible.” Then he showed him how he did it. Quarantine, that it’s something that has been with us for a very long period of time. Maybe we just go back to this world where this quarantine when you fly somewhere, when you travel somewhere, that’s a horrible thought. It’s what we’re in at the moment. I don’t see anybody planning to take that off anytime soon.

Bill: That would suck.

Tobias: I kind of hope it all reopens, but even if it all reopens, and everything goes back to normal. I still think that all of those junky names are way, way too expensive.

Bill: Jesus. Sorry, I don’t know why music just started. Yeah, no, I don’t understand any of these things. I do kick myself for not buying Spirit, not the airline, but the fucking fuselage maker. That was stupid to me. I even wrote it up when it was 20 bucks, now it’s $48. Good move, Brewster. Great, fantastic. Anyway, that’s somewhat revisionist history. I think they’re going to have to spend a fair amount on these new– they’re going to make their own fleets younger. That’s not a news story, if you follow the airlines. You’ve got some CapEx come in, or at least increased lease costs. If you don’t have the increases in the lease costs, they’re going to have longer tenures on the leases. You’re not get something for nothing and you got more debt. It’s a consolidated industry, but I’m not convinced to–

Tobias: I find all this period very confusing, because I can see that there’s some run in the cheaper value names. Tech seems to have been a little bit softer. It’s a weird kind of rotation. There’s no real reason why it’s happened. It sort of just started happening, and it’s been in the press the last few weeks. I don’t know how sustainable. It hasn’t sustained at any other time.

Bill: What, the tech selloff?

Tobias: I care less about the tech, a lot more about the value rally.

Bill: Oh. Yeah. I don’t see why value wouldn’t do okay with the reopening trade. I could see people–

Jake: How many head fakes have you had now, Toby, in the last 10 years?

Tobias: I ran out of fingers, so I can’t count them. It’s that kind of number.

Jake: [laughs] This time for sure.

Bill: Just real quick to close the loop on the Tyler thing versus The Daily Journal. I’m not trying to take shots at Charlie. I love that guy. Berkshire is a huge position for me. I bet with them. Since 2014 to 2020, Tyler, their gross profit is 2.33X. It’s gone from $233 million to $543 million. Daily Journal has gone from $37 million to $45 million, which is what? I’ve got 1.2X, but that doesn’t feel– Yeah, I guess it’s a little light. Anyway, I think that there’s a lot of danger listening to your heroes and just hearing them say something and being like, “Well, they’re right, because they’re my hero,” because I think the writing has been on the wall for Daily Journal for a while. I don’t think that it is performed and I have seen a presentation where a guy did really, really good work. If he’s right, he deserves to be right for the right reasons, but I’m not going to be right with them. It’s just not a horse I’d bet on. Plus, a lot of it’s marketable securities, what happens when Charlie dies? Then, you get some random person running an equity portfolio. No, thank you. Or, you could never sell Wells. If that’s the bet you want to make, you could just go buy Wells.

Jake: Big part of its BYD right now also, which is running a little hot probably, or was at least.

Bill: Which, Charlie was like, “I don’t even know how to hold this, but I’m not going to sell it.” Which I totally get. I like when Charlie gives an answer that I feel like I could give. How do you hold BYD here? Well, I think they’re good at what they do.

Jake: What’s your sell methodology? I don’t know. Still working on that.

Tobias: Haven’t figured it out.

Bill: [crosstalk] That was a real human moment that I really enjoyed listening to. I was like, All right, cool.” Charlie and I are as confused by some of this stuff.

Tobias: Yeah, I was always happy to hear that he hasn’t figured it out either because I don’t think that anybody’s figured it out. I think that people have done the best are never sell. I don’t know if that’s always the case, but it certainly feels that’s the case now. I think that at the bottom of a bear market, you kick yourself because you didn’t sell some stuff.

Jake: There’s going to be some survivorship bias into that idea as well. How many people held something all the way down to–? We don’t hear from them.

Tobias: Well, the way you can do it is just by having smaller positions, and then just not worrying about it. Just don’t check them.

Bill: Yeah, I think he adds to the winners too and he just lets the small ones die in nothing. Then if they get a pop, he’s happy. It’s crazy. I mean it’s not crazy. What’s crazy is how simple the strategy is, how hard it is to actually execute and how good the results have actually been. That’s wild.