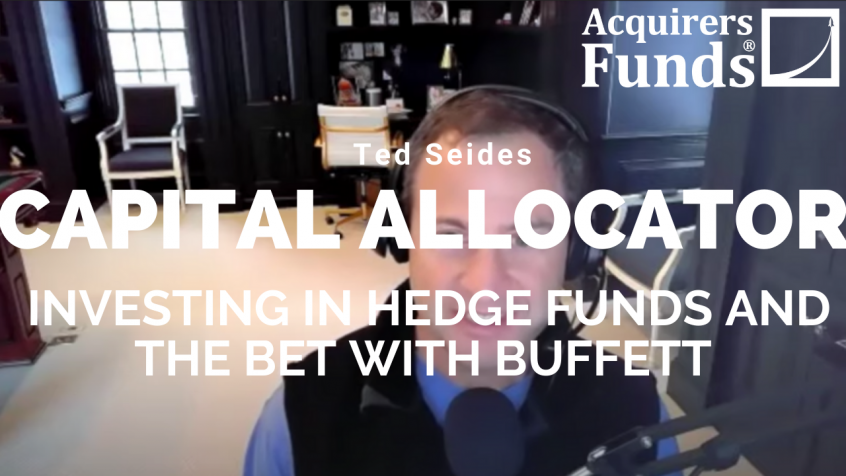 Tobias: Yeah. One of the things that I observe in value in particular, just because it’s been such a long rough run for value, is there’s a progression away from what has traditionally been a value style, which is probably not paying as much for growth, to where growth has sort of been the really significant difference between– growth investors have done very well, growthy value investors have done better than older school value investors. When you see style drift in a portfolio– The way that you described it in the book, I thought was interesting, because you talk about someone who– and this probably happens quite a lot that someone comes in and they’ve got a strategy that works really well in a small– could be a small-cap strategy works quite well. It’s not explicitly small-cap, it just works very well in there. As they grow assets, they’ve got to make some decisions about, do they go into a larger cap universe? Do they buy more of the securities in terms of the number? Do they get bigger positions? And in making those decisions, they are going to change their performance somehow. Is style drift justified in those circumstances? How do you think about style drift?

Ted: A lot of it depends on the strategy itself. There are certain strategies, stock picking strategies, that started small cap that almost by definition will change in some way shape or form. They might change because the manager says, “I want to stay the same as I’m returning capital,” but then you the investor keep your capital with them, so things change. There are other strategies. Think of private equity or large cap equities that don’t. It really comes down to less a statement about style drift, and more a question of what was the allocators investment thesis when they made the investment in the first place. For the same manager, you could have many different reasons why an allocator has invested with them. As long as the allocator does a good job, which they often do of articulating what are the reasons we invest. I used to tell our team, those have to be qualitative, it can’t be– we think they’re smart, unless we’re checking their IQ scores and have decided ahead of time if the IQ score dips, we’re going to redeem. It has to be processed driven because what happens with great consistency is that all track records go through ebbs and flows. When performance gets soft, people then look at their own thesis and say, “Aha, we knew these were risks, they are playing out, therefore we should redeem.” Or somebody else might say, “Aha, we knew these were risks, they’re playing out, let’s add.” Those are two 180-degree different responses. That’s where human behavior comes in and how committees get formed.

I don’t think there’s a rule of thumb in how an allocator approaches style drift in that way. It really has to do with why they think they invested and do they think that particular manager is likely to perform going forward based on the set of conditions at the time.

Tobias: It must be an incredibly difficult process to go through because there’s some well-known stats–I think it’s Mauboussin’s stat that the best performed managers over a decade period will spend two or three years close to the bottom decile of that. You meet somebody smart, they go through that– have some good performance, go through a period of bad performance, then you have to make that decision, do we redeem or not? It seems the wrong decision is to redeem even though all the evidence seems to point in that direction at that time. How do you deal with it?

Ted: Well, the best allocators with the best track records have tenure relationships with their managers that are beyond comprehension to almost everyone who invests. I don’t know the exact numbers. Dave Swensen has been at Yale now for 36 years. My guess is the average manager in their current portfolio, on average, is probably like 16- to 20-year relationship. Most people haven’t been in the business for 16 to 20 years, so that’s how they ride it out. They’re really good investors, everyone wants to say they’re long term, but they’re really good ones stay put. They’re able to ride that out, they’re able to give the managers the confidence that the managers can then ride out positions that they’re going against them. Because otherwise, you’re exactly right, as an allocator, you never know exactly what’s going on inside the organization and it’s very, very hard to make those judgments on a snap basis.

Tobias: As an allocator, you must have to have some look through into what the underlying asset or strategy is doing and then you’re looking at how this person is performing within that, and probably have some idea that you want to act more slowly than precipitously. You want to let the position play out a little bit.

Ted: Yeah. I think that’s fair. Again, everyone’s different. How people choose to go about that process, and the factors that drive their decisions, both on entry and exit of a manager, similar to– it’s actually a lot more similar than different to how managers perceive stocks. Why do you pick those stocks? Why did you enter there? Why did you exit there? Is very, very similar.