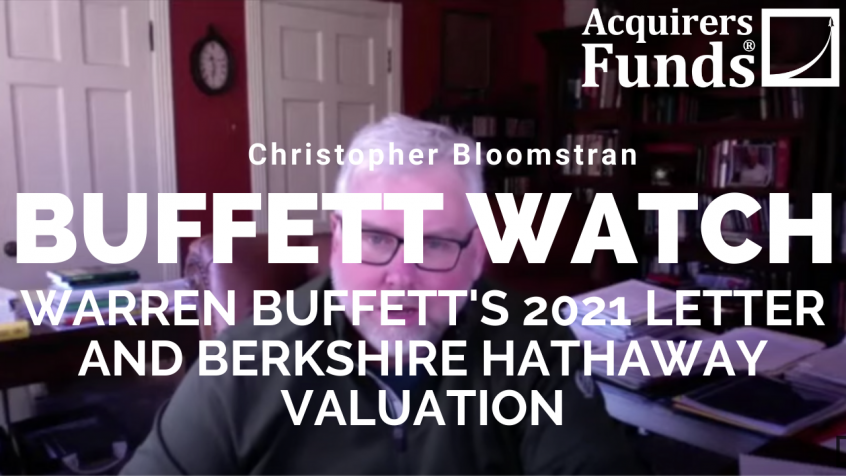 In his recent interview with Tobias, Christopher Bloomstran of Semper Augustus discussed Buffett’s $AAPL Trade. Here’s an excerpt from the interview:

Tobias: I’m not entirely sure when I said it, but sometime last year, I started saying that I thought that Apple trade was the greatest trade ever for a number of reasons. One, because he deployed so much capital so rapidly into that position. Secondly, because Apple is such a big company, such an obvious company that everybody knows everybody’s got some device in their house, an Apple device. I just thought it was a great illustration of what a great investor he is that he took that opportunity to just deploy an enormous amount of capital. Then, it’s gratifying to see, it was rewarded so quickly, but it’s funny that he’s had so little kind of credit for that, why do you think that is?

Chris: No, he’s always just been regarded as the anti-tech. It’s very easy when you’re on as big of a public stage as he is, with your portfolio broadcast to the world on a quarterly basis. It’s very easy to nitpick the mistakes. When you’re running $200 plus billion, what’s now pushing $300 billion in an equity portfolio, there are only so many businesses that you can buy. It’s easy to flag the IBMs, it’s easy to flag, what you’d call, I guess the errors of omission, not owning Microsoft with Bill Gates sitting with him for their weekly Bridge game, and all the directors’ meetings on the phone and vacationing constantly.

I think his regard as a stock picker has waned, which is ridiculous. Even the naysayers would say– Todd probably, but Todd or Ted, initiated the initial billion-dollar investment in Apple, and only for finding God was he able to buy a tech stock for the first time. It took putting $35 billion into a tech stock, if you look at the way Mr. Buffett buys stocks, he buys earning power. He’s buying well known predictable earning power. Having tested the middle rail, on airlines in the past, and having blown those positions up in a pandemic and being faulted for selling those too early, conceivably, and even Wells Fargo and JP Morgan, taking losses on those positions. I think the sense that he’s not a great stock picker, but if you look at the entire history of the stock-picking, it’s not the ability to find 300 or 400 ideas. It’s the ability to your point, to get a lot of capital in something when it really makes sense and let it grow from there.

You go back to all the big deals, American Express, Washington Post, Coca-Cola, Geico, when it was publicly traded, those things drove the bus. Apple here recently has driven the bus, but he only bought it, it was 12 or 13 times. I think all you had to do, and I didn’t do it, I thought, “Oh, hell, they got to reinvent their product line every year.” At some point, the growth curve is going to slow and the growth curve has been slowing, but get a lot of money into it, or 12 or 13 times. The question for me is, A, you got to give him credit because taking a stock portfolio that was as rich as it was in ‘98, and that pivot away from stocks by buying January and buying bonds was brilliant. His pivots over time have been brilliant. I think even when he closed his partnership, formally in ‘69, but started that process in ‘66, having gotten control of Berkshire in 65, his timing on when overall market levels are cheap or dear, is very good. His individual stock picking is very good. He’s handicapped by running high-class problem with having a whole bunch of money.

Whether he gets credit for the brilliant decision to back up the truck in Apple or not, I don’t care. The game on the position itself represents two years of what I’d call normalized earnings at Berkshire Hathaway. It’s been the stock picking consistently over five and a half decades that is driven the bus on the compounding of capital. Let the bluebirds come at him. I prefer to have Mr. Buffett be yesterday’s washed out and let’s keep the stock cheap. If we’re really in share repurchase mode, it was probably a mistake to be talking to you on the podcast about him, and me writing my letters about it. I’m not sure, the five or six years that my letter has been public, that anybody’s listening to the Semper Augustus letter on Berkshire. It just tends to be undervalued, and it’s hard to value.