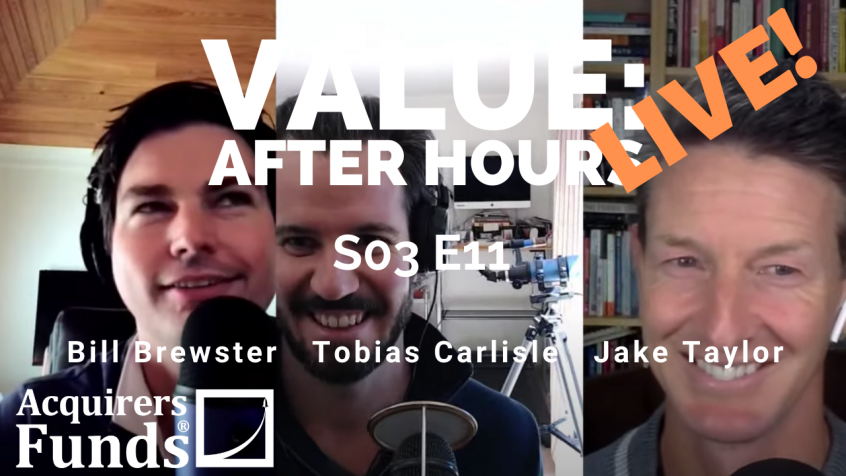 In their recent episode of the VALUE: After Hours Podcast, Taylor, Brewster, and Carlisle discussed Airlines At Ludicrous Speed. Here’s an excerpt from the episode:

Tobias: Well, this is my topic. Let’s jump into what I was going to talk about. I saw a tweet today that said the Jets, which is the ETF of all the airlines is flying. Everybody loves a good pun on a headline like that. I jumped in and had a quick look at Jets. It’s done really well. It’s almost back to where it was pre-pandemic, which is kind of amazing. Markets are a forward-looking discounting mechanism, of course. But the thing about airlines is that they do carry a bit of debt, so I looked at the EV’s. I pulled up the enterprise values, which includes the debt, for folks, in the weeds, the enterprise value is market cap plus the debt, back out the cash. Airlines have also got liabilities on their planes, but that’s not included here. This is just the EV of the holding company.

Delta is basically– its enterprise value is the same as it was at its absolute peak. United is at its absolute peak. Southwest is about 85% of its peak, Americans 85% of its peak and Alaska Air is about 66%, but it had this spike, this weird spike. You can’t look at the EBIT of these companies because they don’t have any at the moment, so had to go through and have a look at revs, EV revs for all of these companies. Long-run average for EV revs across these companies is less than 1, so that means that they sell about as much of their enterprise value every year. So, they’re currently on these multiples. Delta, it’s 3.3 times revs. United is 4 times revs. Southwest is 2.6.

Tobias: Ooh. No idea what happened there.

Bill: There he is.

Bill: Your audio is off.

Jake: Well, it’s on, but it sounds like you’re in a submarine.

Tobias: Let me fix it.

Jake: There you go.

Tobias: All right, we’re back.

Bill: Are we live still?

Tobias: I think so. This is a live video.

Bill: Yeah. We are back.

Jake: This is a quality podcast.

Bill: It’s very high quality. Everybody can hear us.

Tobias: My computer shut down, logged me out of Skype, which is super helpful.

Tobias: I’m back here trying to remember my Skype password.

Tobias: Who would know what that is? Anyway, sorry, amigos. We’re back. Did everybody get my terrible airline stats? Let’s shift to somebody else’s topic here. Sorry, fellas.

Bill: I think we were talking about moral hazard.

Tobias: That’s a good one. Who wants to take that one?

Bill: No, I just think that saying that we shouldn’t have bailed people out is a much easier thing to say in some classroom or theoretical standpoint than reality. I just think that the idea that we should not have come to the rescue of asset-intensive industries and pushed away investment forever– maybe not forever. I don’t buy it. I fundamentally don’t. Now, do I think that there are negative consequences of that? Yeah. I don’t think that if you looked at Delta’s balance sheet going into all this, a rational person would say that was– [crosstalk]

Bill: Yeah, they just weren’t. It was an investment-grade balance sheet. It’s like looking at somebody that has 40% loan to value on their house and saying that they’re out of their minds. No, that’s just the way it runs.

Jake: Okay. Well, let me ask you this then. Is that the government’s job to step in?

Bill: Yes. To keep society going and to protect the system that we all live within, and to keep the fabrics that we all have had an underlying assumption together? Yeah, I think that’s exactly government’s job.

Jake: Let me also ask you this. A reset in that industry does not make the planes disappear. It’s just the ownership of who owns the planes and is operating them may change.

Bill: Who is going to go buy the equity after? How do you finance new airplanes? Do you think that society is better off now than it was 30 years ago?

Jake: I guarantee you there’s a price somewhere that there’d be happy equity buyers of airlines.

Bill: Okay. I think my point to you is that you’re trying to make the world as you want the world to be. What I’m saying is, that’s not the world we live in.