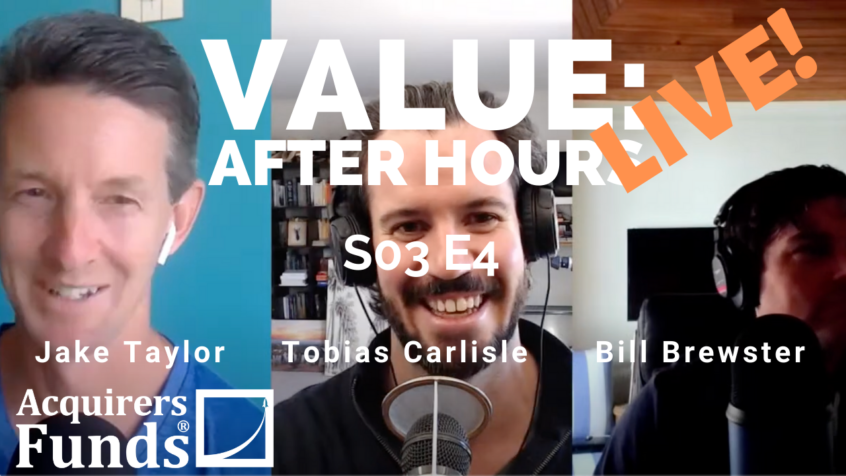 During their recent episode of the VALUE: After Hours Podcast, Taylor, Brewster, and Carlisle discussed Value Is The Driver. Here’s an excerpt from the episode:

Bill: I was talking about Wells Fargo the other day. This actually loops into Pabrai’s transformation. The reason that I have not gotten back into Wells is, I’ve been spending time on, one, different names. Two, thinking more along the lines of, would it just make more sense to pay up for something Ally, where I have a pretty high degree of confidence that business will be bigger in 10 years than it is today versus Wells, which I think– I believe in Scharf, I believe in what they’re doing over there.

But I do think that objectively, if nothing else, the business is so much bigger than ally that it’s harder to grow, just as a function of the law of large numbers. Does it make sense to make a more expensive bet today, if you think that the business that you’re betting on is going to grow in the future? That’s sort of what kept me out of it.

I was just listening to Pabrai’s Manual of Ideas presentation, and I think that’s basically where he’s gotten to. That’s where I think is a reasonable place to play. Now, I understand it’s hard, but I don’t think value investing in the traditional sense is particularly easy either.

Tobias: No, I was telling you guys before we came on, but I ran that– I’ve been looking at what if we only limited ourselves explicitly to very good companies, and what happens over the last two decades. The same definition applies last time, it’s like a 20% return on equity or better, gross margin of 35% or better. Then, form a portfolio, and then try and determine the drivers of performance of that portfolio by holding from the beginning of 2000-1999 to date.

Then, every year buying a crop of companies and seeing what– just running a simple regression to see what characteristics of that basket of companies led to the meaning of outperformance. Better return on equity gives you a negative slope, which means that the higher the return on equity in that portfolio, the lower the returns. The thing that worked best was just price to free cash flow, which is the value metric. The higher the price free cash flow, even 20 years ago, the better the performance through to today.

So, I’m not ready to throw in value yet. I’m not going to throw a deep value at that door, but the other observation was that when I look at the companies that it identified because I’ve gone through it with a fine-tooth comb just to see if I can figure out. If I looked at the names that I’ve been able to buy and hold these names for the whole period, it’s very hard to tell what’s going to win. The few things that I observed, it wanted to buy– you remember when all the for-profit colleges got shut down?

Tobias: It wanted to buy the for-profit colleges all the way through that. I bought a Polo and I bought ESIN, which is now ESIQ. What was that? I actually did own it, but I can’t think what it’s called now. Yeah, I just can’t think what it is. I wanted to buy those things, so I don’t know if you could have sidestepped them at the time by thinking there’s a lot of government regulation in these things, and maybe some of those old ideas are good, you want to avoid things that are overregulated or surviving, thanks to government regulation.

Tobias: I don’t know. The problem is that if you approach it that way, there’s not a lot of stuff that gets through the screen.

Jake: It’s going to say what isn’t surviving on little government help at the moment?

Jake: Didn’t take any PPP though.

Bill: Yeah, that’s true. But all of his bank holdings got indirect bailouts.

Bill: He said that?

Bill: I don’t think he said that.

Bill: Fake news. You are wrong.