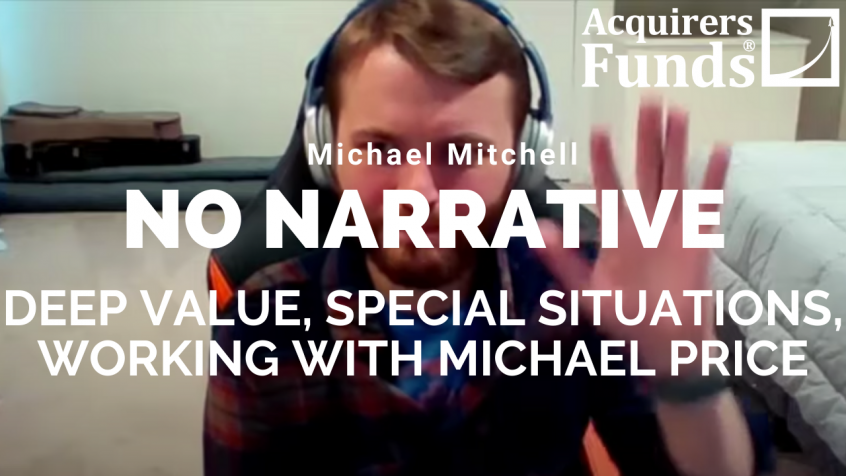 During his recent interview with Tobias, Michael Mitchell, who is IgnoreNarrative on Twitter discussed why Paying A Low Multiple For Cashflows Is The Right Choice. Here’s an excerpt from the interview:

Michael: Well, it almost, for me, as I look at the world today, as long as you have the right people who really have your back managing your business, and the business generates cash and it doesn’t go away, it’s almost like it has to do okay. It’s almost like it has to work. Of course, there can be bad luck, but as long as the guys running the show are trustworthy, honest people, the business itself isn’t just completely getting disintermediated by Amazon or somebody of the like, the worst-case scenario is you have a returned is inefficient, in my view.

It’s also so much more logical to me that if I buy something that’s– say I buy a dollar’s worth of cash flow for 50 cents, it’s so much more logical to me that, I’m going to get that make more money over time and do better than if I pay $1 50 for that cash flow of $1 because there’s some magic at the end of the rainbow that’s going to pay us all. It just hasn’t. You can read, there’s so many books about this maybe the world is different today. O’Shaughnessy wrote a book called What works on Wall Street, and he walks through this from the late 60s until 2011.

Over time, paying a low multiple for cash flows has been the right move. It hasn’t been recently. I think it probably will be again. I just think about things so differently for most people. If I was going to go underwrite a business and own the whole thing, would you rather pay a huge number for it or a small number for it? It’s like, “Well, obviously a small number.” The outcome for me and my family over time is going to be very dependent on what the business does, but also, if I pay $100 million for a business generating a million dollars in profit, probably not going to work out very well for me, or I should be able to find something better to do with $100 million. Sorry, Tobias, I told you, I’ll just keep– if you pull the string on my back, it’ll just all spew out. It should work that way. Balance sheet should matter, capital allocation should matter. It hasn’t, but it should. I think it will, that’s my bet.

Tobias: For me, in some ways, it’s been a good experience, because I think that I did focus too much on what the stock price did after I bought some because it’s just sort of– the relationship had been quite tight through most of my investing career that if you bought something cheap enough, the market did wake up to it pretty quickly and then you got paid. More recently what’s happened is that just hasn’t happened. Even though the underlying business has done reasonably well.

The yield is still pretty good, the cash flows are growing, it’s a much fatter cash flow than the market. That should be something that would work. For the last few years, that hasn’t been something, that’s been the thing that has driven me the most crazy until I got to the point where I was like, “Well, the opportunity doesn’t exist until that happens before you buy it.” There’s no reason why this is going to rectify itself quickly after you buy. You’ve just got to get more used to that being the case.

Michael: Well, I wonder too if there’s not a– I know what Henry Singleton would have done in that situation. I know, because he has a book and he did it. [crosstalk] Yeah, massively. By the way, he would have told you, like, “I don’t care whatever you think. But if you’ll sell me stock, I’ll buy 80% of my float.” It creates enormous value for the people who stick around. It’s the same with Malone, is what they would do is take advantage of that situation. By the way, they caught a lot of– excuse my French, they caught a lot of shit for it. It is interesting to me that CEOs are not doing that.

I can think of one in particular, these are friends who I’m like, well– because of the social nature and the immediate nature of information because everybody knows everything, that there’s an image thing that people are very focused on, I think a lot of these gaps would close if the same thing were happening in the 60s, 70s, 80s, where we didn’t have Twitter, and people were just like, “This is the right thing to do, I’m just going to do it,” versus you get shamed for like, “Oh, maybe sell you my stock at $2,” and it turns out was worth $8. I probably would have seen more of that. I haven’t seen any of that. I don’t see any of that anywhere.

Tobias: I think part of the reason is many smaller businesses typically that are run by the founder who went through the IPO and is still there, they’re more of an engineering type and haven’t– nobody has come and said to them, one of the options that you have is to buy back stock in your business. This is what impact it will have on the business.

When I was working in an activist firm, we’d go in and have that conversation. Many times, there’d be no need for any activism, because they’d say–, and then we just explain it, then they sit there and think about it. Then, a few months later, the buyback would emerge. You think, “Well, they just hadn’t had any–” nobody had said that to them at the time.