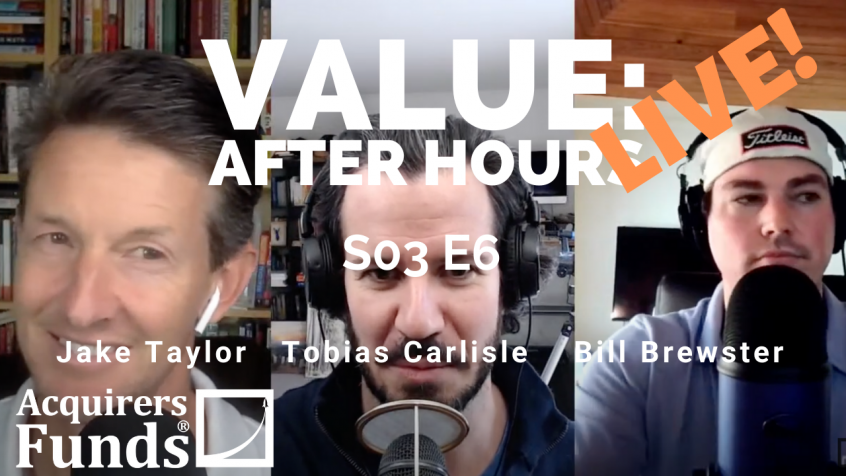 During their recent episode of the VALUE: After Hours Podcast, Taylor, Brewster, and Carlisle discussed ARK’s Presentation On The Future. Here’s an excerpt from the episode:

Jake: Okay. After a decade of sucking my thumb apparently, I’ve been working on having more right tail consciousness. Think about how things can go well, not just how things can go wrong. I’m trying to re-bias a little bit maybe towards appreciation to the right tail, which I think is a healthy thing to do if you’re a value guy who’s predisposed towards the left tail, like I am. I thought, well, let’s look who’s really been killing it with the right tail kind of thinking, especially raising money from a right tail thinking. ARK has just been insane the amount of money that they’ve hoovered up. They’re challenging Fidelitys and Black Rocks, and huge, huge institutional money that is just unbelievable. I think a lot of it is retail coming into ARK. I don’t know that for sure, but that’s my understanding.

Jake: Bill’s on a lag here. They have a 2021 Big Ideas slide deck. It’s 112 slides, all about disruptive innovations that are coming. I go through it and there’s a ton of cool stuff in there. It’s AI chips, GPUs, augmented reality, electric vehicles, automation, ride-hailing, drones, satellites, hypersonic flight, 3D printing, gene therapy, oncology, like it’s all this stuff that’s super cool.

Bill: To be fair, it might be here now. [crosstalk]

Tobias: It is all cool stuff.

Bill: Well, just real quick, she has been around since then. She may have followed these trends and thinks now is the time that the inflection point’s there. I mean, that’s fair.

Jake: Could be. Especially on a nonlinear trajectory, it looks like nothing at the beginning and then all of a sudden, it’s making huge strides. Anyway. I’m looking through this deck, and the first thing I notice is, they say the word ‘could’ 62 times in the deck. They’re just talking about, like, “Well, this could turn into this much.” ‘Believe’ is in there 40 times. Where, “They believe that this could happen.”

Jake: Yeah, it’s compliance, but it’s also just how much of it hasn’t come to pass.

Jake: There’s a lot of assumption there. That’s fine, I guess, if you’re doing these projections, but I’m looking through and most of their timelines, they either put on 2025 or 2030. I thought– Well, just back of the envelope, I threw it all into a spreadsheet just to see all these cool technologies, what is the sort of TAMs that they’re talking about here that they expect? I added them all up, and this is just from the ones that they cited in their spreadsheet. We’re not talking about anything outside of this, but their TAM for 2025 for all of their disruptive technologies, $3.2 trillion. TAM for 2030, $6.6 trillion. I’m like, “Okay.”

Jake: That’s a fair amount of growth off of probably much, much smaller basis. They didn’t cite all of them where they started from, so I didn’t back into what’s the assumed CAGR of 2030. I did look to see, all right, 2020, what was the total revenue of the 18 largest tech companies? That ended up being $1.8 trillion. This includes Apple, Samsung, Foxconn, Google, Microsoft, Huawei, Dell, Intel, Facebook, Tencent. These are name-brand massive companies, huge revenues, all the growth rates that we would have never expected to materialize 10 years ago. That’s 1.8 5 trillion for all of those companies. To get to even by 2025 basically doubling that in disruptive, not just like, “Oh, well, Apple’s going to double revenue in the next five years or 10 years.” This is the disruption, which to me means like coming from out of nowhere.

Okay, well, I think that it’s illustrative to look at one of them in particular, and this is the ride-hailing one. I think it’s a super cool idea. It’s stupid that most of our cars sit for 90% of the time. It’s pretty wasteful, environmentally. If you could have on demand on your phone, a deep enough network where you just walked out and grabbed a ride and it was super cheap, especially because autonomous, like you took the human element out of it, all right, I can get into that. That’s cool. However, they’re projecting at $1 trillion per year profit pool for ride-hailing in 2030, $1 trillion.

Jake: I like look back at Uber and Lyft’s financials and I’m like, “Okay, nothing but red ink here. Something’s going to have to really hit a serious inflection point to get out of this hole.” I’m looking to it, okay, Apple, the last 15 years, they had arguably the greatest consumer product of all time. The iPhone, unequivocally just an absolute lightning in a bottle that they caught. Cumulatively for the last 15 years, Apple’s net income is just a little under $500 billion. That’s cumulative for 15 years of the best product, the best company, and we’re at half of what they’re saying is going to be available every single year from ride-hailing? [sighs] All right.

Jake: -I want to get there [crosstalk] cool stuff.

Jake: Back of the envelope, I can’t even get in the neighborhood.

Bill: Look, I’m just being devil’s advocate. They’re talking about software margins. They’re going to talk about some tax, but profit seems high. I mean, you could maybe argue that’s like a 40% profit margin. I don’t know.

Tobias: What was the number? Was it a trillion?

Bill: I don’t even believe it.

Jake: A trillion-dollar profit on– I think they said like $6 to 7 trillion of revenue available TAM for ride-hailing.

Tobias: Is that every human being on a planet, 7 billion people spending?

Bill: Oh, I guess Oracle Brouhaha says, “I think that profit pool includes a lot of things like telecom, semis, ride-hailing, fleet maintenance, and OEM sales.” I guess it’s all a matter of definition.

Jake: Well, there’s going to have to be limited, limited competition in all of those to get you to a trillion dollars of leftover of producer surplus.

Tobias: What do we spend on cars globally? Like, what’s our transportation budget globally?

Jake: I don’t know the answer to that.

Bill: I don’t know either.

Bill: I don’t even know what a trillion is anymore. You’re talking about numbers that just make my brain say that, sounds like a lot.

Jake: Well, anyway, the moral of the story here for me is, I want to get into this, I think it’s cool stuff. The numbers to me, I can’t get into the neighborhood still, even though I’m trying.

Bill: Analog chips. It’s a good thing to look at.