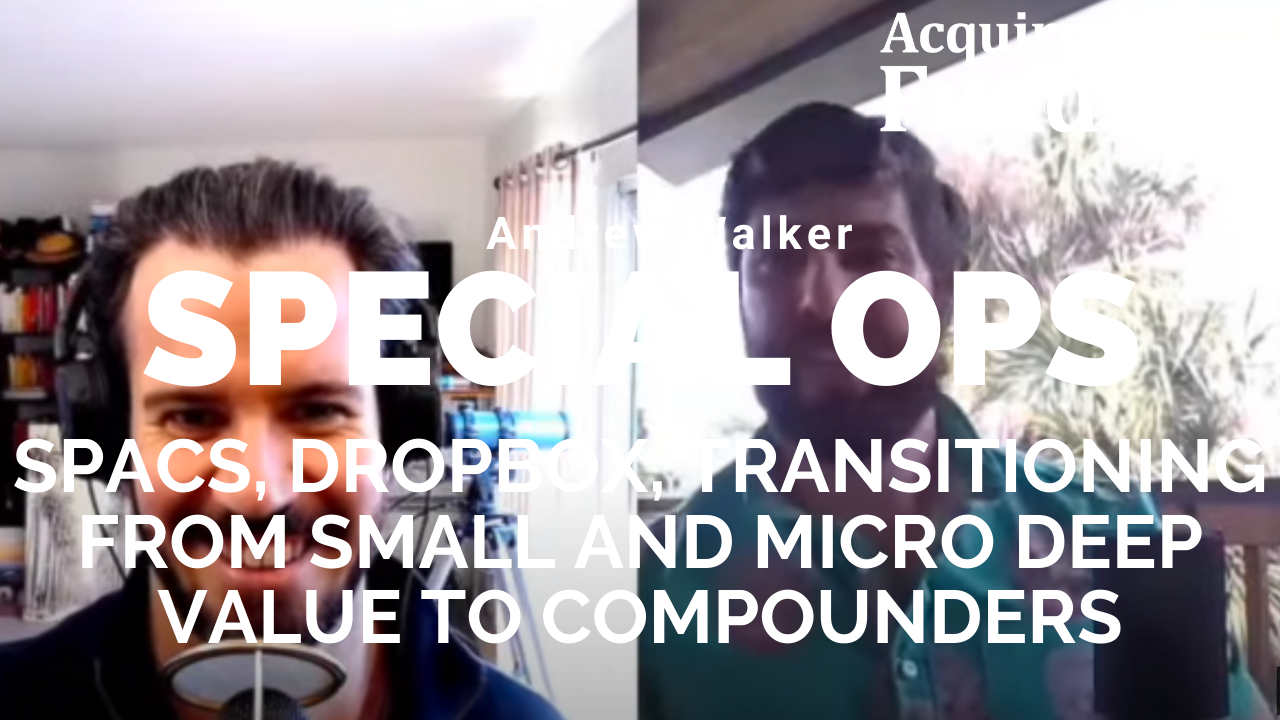 During his recent interview with Tobias, Andrew Walker, Portfolio Manager at Rangeley Capital discussed $DBX And That #2 Idea. Here’s an excerpt from the interview:

Tobias: How well do you know Dropbox?

Tobias: Do you want to give us the Dropbox thesis because it looks it’s transitioned from being a more FinTech science experiment to that– now, it’s starting to look like a real business?

Andrew: Dropbox thesis, I think, I’m trying to pull up all my notes here, so I can give you precise numbers. I don’t know if that’s going to work with the podcast. The thesis is really simple. A 100 million plus people use Dropbox, I think they have about 15 million active paying users. When you look at that, this is a product that people are using. I use Dropbox to save all my files, that should be a very sticky business. It trades very cheaply. It’s run by– everybody loves the founder, CEO. It’s run by Drew, the founder. He still runs it. He’s got a very option stock price heavy incentive system. He owns a lot of stock, but you can see this in the [unintelligible [00:34:41] I think it’s called the Founders Grant, where if the stock gets 30, he gets one payout, 32, 35, all the sorts of stuff. They layout all their targets. They say, “Hey, we’re going to do a billion of cash flow by 2023.” If you look at their history of meeting the numbers, they put out, this is a company that does not miss when they give guidance. They consistently beat their guidance.

I think you add it all up and you say, hey, cheap company run by founder who– by the way, I think nobody gives him credit, but he’s a founder of Dropbox, and he tried to buy Slack for, I think it was a billion dollars. I believe the story is his board turned him down. Slack just got bought for $35 billion by Salesforce. A lot of people like to say, “Oh, Blockbuster could have bought Netflix for a million dollars,” or something. Well, it’s probably a different company and a different product in someone else’s hands. But I do think there is something to– here’s this heavily incentivized founder who built Dropbox, who saw the future clearly enough to want to buy Slack for a billion dollars, I think there would have been huge synergies there.

Tobias: He sits on the Facebook board too. So, there’s always a potential for something there.

Andrew: I think you’re right. What would the Facebook-Dropbox synergies be? Does Facebook really want to get into another acquisition when they’ve got the FTC breathing down their back saying, [crosstalk] “Hey, your past acquisitions have done too well, we have to take them back for you?”

Andrew: I talked earlier about how Match opened my eyes. Instagram, I remember, people hated on them. The numbers were 39 employees for a billion dollars. Facebook paid all stock, and people said, “Are you insane?”

Tobias: It’s too much, it’s crazy.

Andrew: “39 employees [crosstalk] billion dollars?” That was one of the ones where I looked at and I said, “Are you guys crazy? This is 30 million active users, and they just bought this and the synergies between they’re going to be huge. This seems like a pretty darn good deal if you look at the optionality.” That’s a different story. For Dropbox, I do think there are companies that could acquire it. Who thought Salesforce was going to buy Slack? I don’t think a lot of people thought that was going to happen, and they paid a very nice premium for that business. I don’t think Dropbox fits quite as neatly into any company’s portfolio, but there’s a lot of people who have Dropbox downloaded, they’ve got a lot of credit cards on file. I think there’s a lot of different things that Dropbox could do, either as someone else’s acquisition target, or for Dropbox going and growing the business.

Tobias: Yeah, I like Dropbox as an opportunity too. I also like the idea of finding these guys who’ve got product number two. I think that’s a good approach.

Tobias: It meets that rule of 40. It’s not so much on the growth side, I think, is the problem.

Andrew: Yeah. Dropbox, if their profits were a little lower, but their growth was a little higher, I think people will be going crazy.

Andrew: The big question with them is there are terminal value questions, because a lot of what they do, you can get for free on Google Drives, you can get for free from a bunch of other places. So, I hear that, but it comes back to what we said with Angie’s List versus Facebook. Dropbox, one thing is storage and making your life easier with storage, that’s probably 15th down the line for Google and for Microsoft. A lot of people are putting their money where their mouth is and paying for this product, I think they’re focused, I think they can do a lot with it.

Tobias: There’s also reasonable argument for an independent, if you don’t want to be associated with Google or with Apple, or with whoever else. You can go and work with Dropbox and it’s a totally independent company.

Andrew: They’ve made this argument before and they’ve even said like, they were doing a lot of integrations with Slack. I thought the Slack still might get together. The coalition of the independent stuff. Something simple, if you use Google Sheets for your business, and I use Microsoft Excel, and we’re going back and forth, that can make it really difficult. It probably doesn’t matter for us, but if you’re a lawyer and all your clients are on different products and stuff, having an independent thing that integrates with all them actually has a lot of value for for them. So, yeah.

Andrew: Yeah, I was about to say, some people might argue that Square was product number one and Twitter’s like accidental mess-up product number zero, or something but yeah. Jack and Twitter, Elon with what, 17 different businesses now? There are a lot of examples of these. It’s tough, but I love getting that optionality for free.