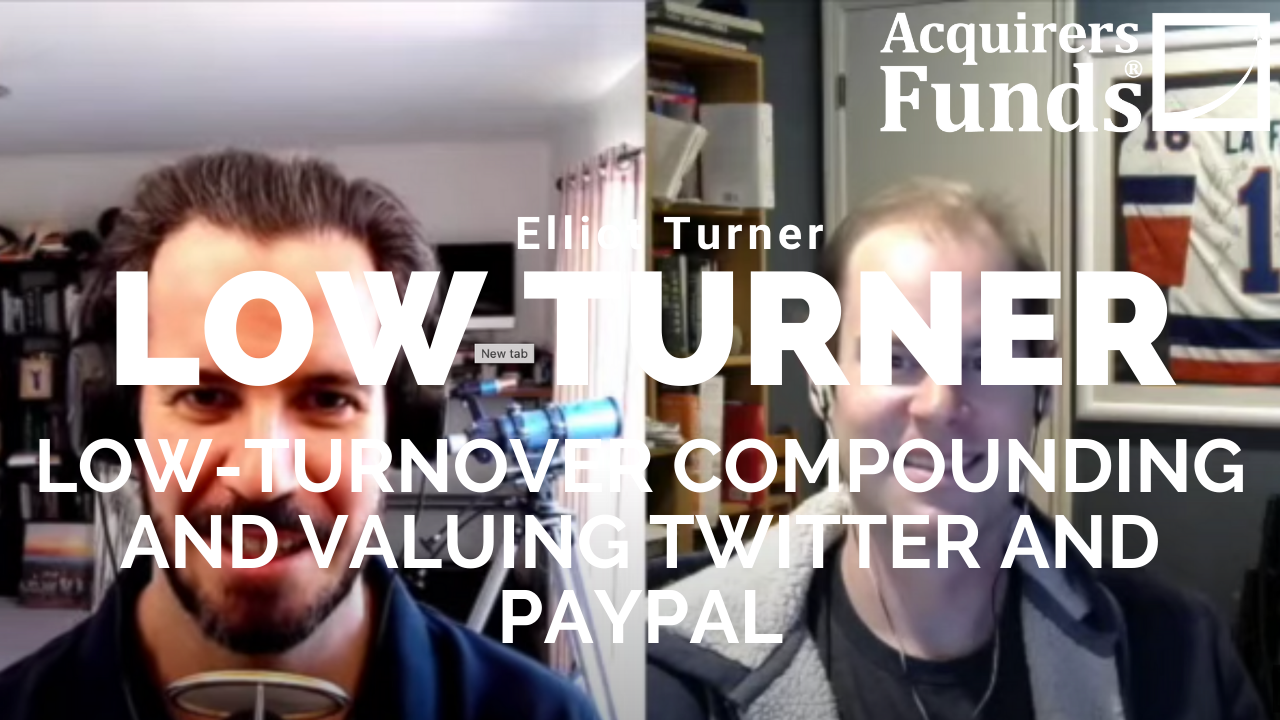 During his recent interview with Tobias, Elliot Turner, Managing Partner at RGA Investment Advisors and Twitter guru discussed Valuing $PYPL. Here’s an excerpt from the interview:

Tobias: Right. I want to change gears a little bit because we’re going to run out of time, but I really wanted to talk to you about PayPal as well, because it’s one of the stocks that– I said yesterday, it’s optically expensive. It’s trading at less than a point of free cash flow. I just wanted to– you had a very thoughtful approach to valuing it. And I just wanted to– if you could do that again for me, please.

Elliot: Yeah. One of the things I do in my process is I build– reverse engineer DCF. I’m trying to look at what is embedded in today’s stock price. I’m going to go all the way up to the KPIs that lead to revenue growth. So, what drives revenue growth? The first thing I’m obviously trying to understand is, what margins does the market expect this business to have? What sort of revenue growth do they need to achieve today’s stock price? But the next thing I’m going to do, once I have an understanding of that is I’m going to test the sensitivity of each of the key lines and each of the key assumptions.

In PayPal from the very beginning, I got involved in PayPal with eBay before the split. So, I’ve been involved for a while. PayPal was once a really frustrating stock, much like Twitter is today, where seemingly nothing could go right.

They similarly had a whole lot of code debt, and they had to like re-platform everything to be able to achieve some of their growth ambitions today. And then the other thing that they really needed was they needed Square to come along– Jack Dorsey, well done– and create Cash App and start doing things with a much broader mandate and much faster. God, Jack moves fast. He’s not the one holding them back. He’s moved really fast here, and do things that are interesting and different. They really shook PayPal up and PayPal realized that they had a much bigger different opportunity than they had been pursuing at first.

Now, one more step back is that Dan Schulman when he came in as CEO, he had to work within an ecosystem in a really challenging way. When he came on as CEO, Charlie Scharf at the time was the CEO of Visa. Now, he’s at Wells Fargo, but at the time he was at Visa, and he was saying things. I think his literal quote was, “We view PayPal as our frenemy, and we will go nuclear against them if they don’t play nice with us.”

So, Schulman had to really navigate this complex mosaic of players in the payment ecosystem who each had important roles to play. What he did that was pretty brilliant was he struck partnerships with each of them in very constructive ways where he aligned PayPal’s mission of digitizing payments with each of these players, so all the players in the ecosystem now have incentive to participate in driving growth PayPal’s way.

One of the things that I observed when I was doing this reverse engineer DCF and toying around with the numbers, everyone was obsessed with take rate at PayPal. They’re like, “My God, take rate’s degrading. How could they ever drive incremental margin with take rate?”

It turns out there’s one other line that’s really important. It’s how many times users transact on PayPal per year, the engagement line. I think at the time of the split, it was about 17 times a year. So, you’re not even talking about once a week that people are using PayPal, you’re not even talking about twice a month. One and a half times a month, the average PayPal user would use the platform. I said– right then and there, I realized, there’s so much leverage to this line in so many different ways.

For example, if you bring in a new user, you have to spend customer acquisition cost against that user. It costs money to actually acquire a user and bring them in. If you bring a new person in to use it 17 times, I mean, that’s great. It’s got its core margin attached to it, though, but if you get someone who’s already a user, to go from 17 times engaged per year to 34 times per year, you have no customer acquisition cost against it, so that 17 times per year is worth a whole lot more than bringing in a new user.

Interestingly, now we’re nearing– we’re at about 30 times per year that the average person engages with PayPal. They’ve nearly doubled the amount of times people use the platform. One of the things I do when I structure a position, is I say, “Okay, I want to buy it when it’s GARP, but I want to hold it when it’s growth.” If I get it right, I’m really on hold it through their real growth period.

PayPal is definitely a little more expensive now, but the people that they’re bringing on are so much more valuable than the people in the past because they’re maintaining that higher engagement level. When you think about what they’ve done since COVID, COVID pulled forward like five years of growth. They added more users in the first half of this year than I think they did the prior three years combined. It’s just phenomenal what that does when you roll forward the economics of the business.

When you look at it on a trailing basis, the numbers don’t look quite as good as what they will look like when you roll things forward, as they continue to bring on new customers, as they get engagement of their new cohorts to be consistent with their older cohorts. Then, they’re doing way more creative things in terms of how they get you to use the app and how you engage.

One of the awesome things with bitcoin, and I had been involved in Square, I– no longer hold shares, I wish I held it a little longer. One of the interesting things in Square is that– I think it was through Square that I first encountered when they opened bitcoin trading, the average person who had bought bitcoin opened the app twice a day. PayPal was having a challenging time getting people to open their app, because you could engage with PayPal without opening the app at all.

You open it up to bitcoin trading, and now all of a sudden, you have people using it twice a day, and you have some valuable real estate. If you open the app right now, in the app, there’s a promo, “Get three free months of Spotify, if you click this button.” How much do you think Spotify pays for that? That’s really valuable. Next month, it’s going to be someone else, the month after that it’s going to be someone else.