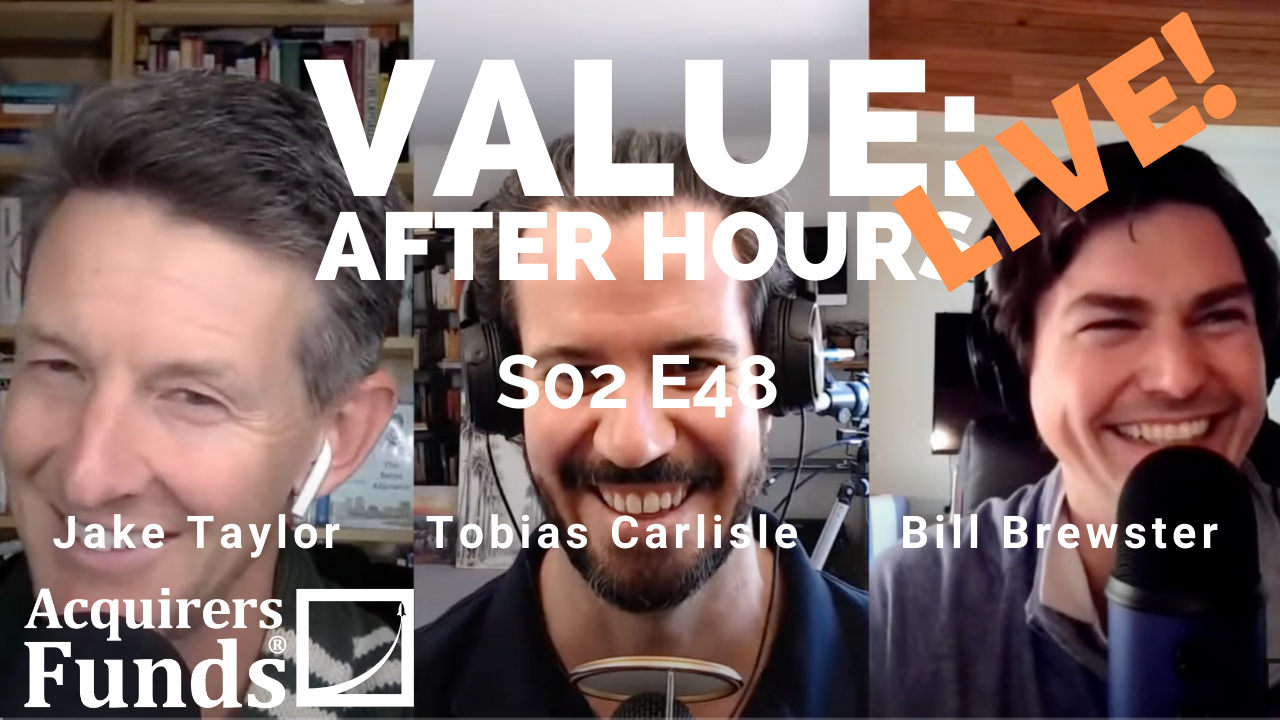 During their recent episode of the VALUE: After Hours Podcast, Taylor, Brewster, and Carlisle discussed The Fear & Greed Index. Here’s an excerpt from the episode:

Tobias: I don’t mind, I’ll take it away because I’ve got a show on here. Fear & Greed. Got to give a shoutout to ValueStockGeek for this one, because he let me know about it. I’ve been aware of its existence but not really focused on it too much. It’s a funny indicator. It’s published by CNN, and it’s basically a– it looks like a speedo from the car, like there’s a red zone, which funnily enough is greed. Sorry, is fear is extreme fear, and that’s at zero. Then you get extreme greed at 100. I don’t know if there’s ever been a 100 rating on it. There’s probably never been a zero rating either, tends to be in the middle somewhere. But we can track it over time. Well, let me tell you what’s in it first.

It’s a weird combination of stuff, but it seems to be reasonably effective. Looks at stock price strength, stocks hitting their 52-week highs, safe-haven demand, which is stocks trading relative to bonds, put and call options over a five-day average. Price breadth, stock price breadth using a McClellan volume summation index, whatever that is. Market momentum. Just if it’s over– it’s over 200-day average, I think. Junk bond demand, market volatility. So, it’s this combination of things that indicate how everybody feels about the market, I guess, rather than looking at, traditionally, we might look at valuation or other indicators like that. I think is a reasonable short-term sort of indicator, just tells you. So, I think it’s useful. As a value guy, probably one of the hardest things to do is to just stay patient and just wait for your pitch. I think the last five years have really tested a lot of guys, a lot of people have drifted because it’s just too painful to sit waiting for these things to get cheap enough to just shift your hurdle rate down, just accept lower returns, or do you sit there and try and wait for that really fat pitch.

I honestly don’t have the good answer for it. I’ll give you my answer, but then you can have a look at my performance, and you can see what a good answer that’s been. I think you should wait, but that’s not been particularly helpful. The interesting thing about it– and this is what ValueStockGeek alerted me to, which I think is very useful. Basically, it trends between 0 and 100. But it never really gets to 0 and 100. So, you want to look at it in quintile. When it’s below 20, that’s a pretty good indicator of a short term– It’s pretty good buying in that zone. When it gets above 80, which is the top quintile, then it’s expensive, and it tracks the market reasonably well. At the beginning of this year, it got to the highest reading, it came right up on 100. It was like 97 or 98.

Tobias: Yeah, right. It was right at the end of last year or at the beginning of this year, the absolute peak was right on the turn of the year, whatever day that was. And then, through March was one of the lowest we’ve seen. It was almost to zero. So, it’s a pretty good– it would have said to you sell something or buy some puts or sell some calls or something in January, which would have been a pretty good move. And then at the bottom in March, it was telling you to buy everything that wasn’t nailed down, which again, was a pretty good indicator. You can go back through time and see how it’s performed. It’s been very good. You get about one or two opportunities to buy and sell every year. From that perspective, I think it’s a reasonably helpful.

Now, it’s not giving you too many things to do. I’m not saying you buy or sell everything. I’m just saying it’s just worth knowing where you are in the cycle. If you’re getting the urge to buy something and you’re thinking about paying up, if you have a look at the fear and greed indicator, and it’s close to 100, you might want to consider the impact that’s having on your emotions too, that you’re getting tired of waiting and wanting to buy, and maybe you consider that stage not buying and waiting for an opportunity where it’s a little bit closer to the bottom. When we look at it now, it’s at 92 which is one of the highest ratings that it’s–

Tobias: [laughs] Yeah, that’s right. Almost there. Basically, this is the sell zone. Anytime you’re over 80, you’re in the sell or the don’t buy zone. Just stay cool like Fonzie, at this point. Just wait for the fat pitch. No idea when it’s going to come, but I would just say that it’s extremely optimistic, extremely greedy at the moment. And that’s literally what the indicator says. It’s extreme greed. For my two cents, I don’t think it’s a good time to be doing anything right now. Unless you got something that’s just screaming at you to buy it, you probably going to get a better opportunity in the not too distant future. You guys use anything like that, you ever think about that? Find that helpful?

Jake: I find it very interesting, the inner year movements of it. It’s surprising that it goes as high and as low as it does in the middle of a year.

Jake: Because it doesn’t feel that when you’re in that year, it feels a little bit more smoothed out for some reason, but– [crosstalk]

Tobias: [laughs] Does that mean no?

Jake: Well, I’m sure that you could correlate never-sell conversations with the fear and greed index. There was no one saying never sell in January of 2009. I don’t remember that conversation occurring at all.

Tobias: No, me neither, but we’ve achieved apparently high plateau. There’ll be no more gigantic mega bears. We’re only going to have these like mid-size mega bears. Well, not mega bears, mid-size bears where it’s down 20% golf ball off a concrete path, straight back to all-time highs.

Jake: I hear people talking about how it’s like we’re at the beginning of a new bull market right now.

Jake: Yeah, exactly. But that doesn’t make sense to me from a– when I think about the classic setup for just a premium conditions that a bull market could sprout forth from, it would be high-interest rates, low-profit margins, low valuations, low sentiment, all these things are the ingredients that you need for a super bull market.

Tobias: I think we got zero– [chuckles]

Tobias: I feel like that’s been the case for the last five years.

Bill: Yeah, I mean, I don’t know that the margins are going to come in.

Tobias: You’re not margins are the most mean-reverting series and finance kind of guy?

Bill: I mean, they haven’t been lately.

Bill: I think there’s a reasonable argument to be made that in more of an intellectual property world, maybe they’re less mean reverting than people maybe want them to be.

Tobias: Is it an IP world? Or is it the network? It’s just a winner takes all world rather than–

Bill: Yeah, intangibles, generally. That’s what I would say.

Jake: I think a big part of it is globalization and capital winning really against labor, as you’ve added a ton of labor into the corporate world, but we’re maybe heading in the other direction a little bit that way with more trade wars, and who knows what, little bit more protectionist policies. You might not see the same dynamic, I don’t know.

Tobias: That was more of the last administration, which has been thrown out, so the new administration, they’re kind of– do you think they’re going to continue with those policies?

Jake: I have no idea.

Bill: I think the narrative on China has changed pretty permanently, at least for the foreseeable future, but I don’t know. I mean, I don’t think that there’s euphoria everywhere, I guess, but I didn’t invest through ‘99, so I don’t have a sense of whether or not people that were sort of in the more value-y names and 99 were euphoric or not. Certainly– I mean, look, Puru, through my man 400% in like a year or whatever, year to date, he even admitted. He was like, “This has been a heck of a run and will probably never be done again.” You see returns like that– He even said that he thought it was in the nascent stages of a bubble. When Puru saying it–

Jake: Nascent? What does full grown look like this?

Bill: I seriously feel like, I’m not even sitting in front of you guys. Inning three. Geez.

Jake: You’re right, Billy, you’ve called it so far. I haven’t been wrong, other than some minor hiccup in March.

Tobias: That’s true. And that wasn’t because of overvaluation, that was for a different reason.

Bill: That’s right. The world had to stop.

Tobias: There was a specific reason for that one.

Tobias: What a crazy time in the markets, geez.

Tobias: Well, I think it’s untethered from fundamentals now. So, yeah, but it can go wherever it wants to go. As David Einhorn says, “Three times overvalue is no less silly than two times overvalue.” It’s just that silly.

Bill: Yeah. Well, and it’s just like when you’re putting– I mean, look, I know that everybody has a process that they have to justify to themselves, I get it. But when you’re valuing the cash flows that far out, you’re bound to be able to tell yourself stories you believe.