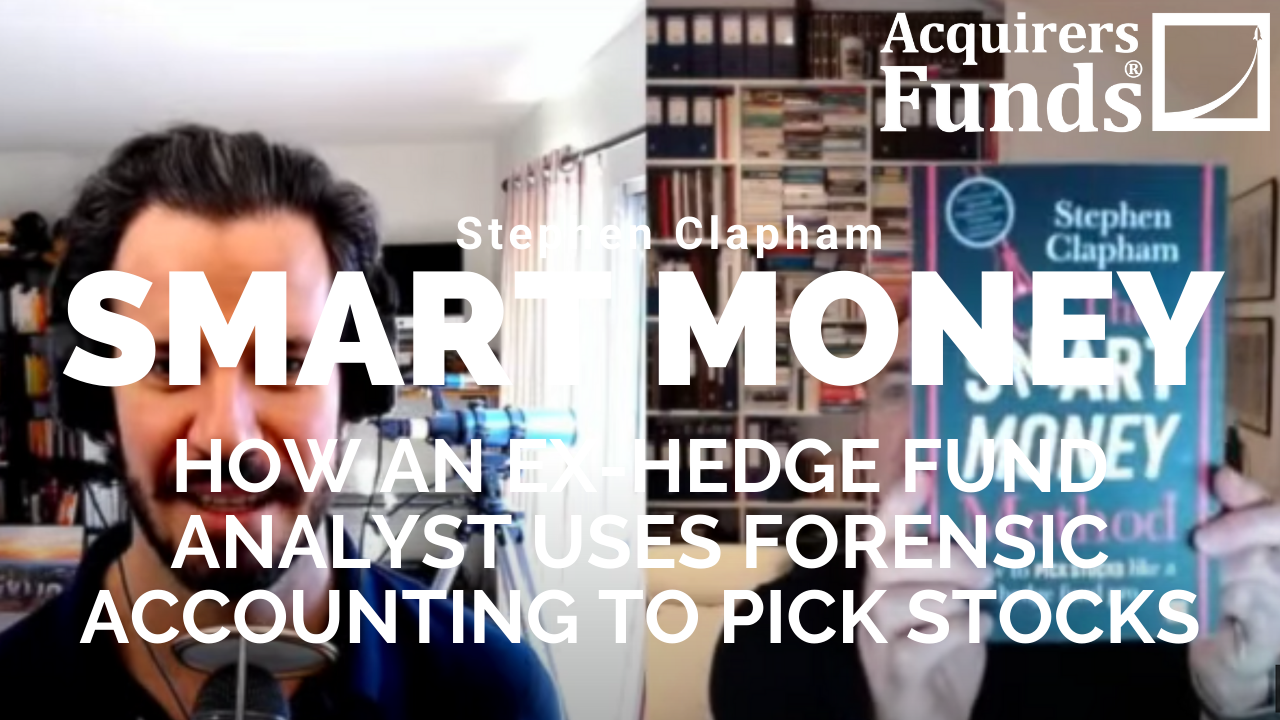 During his recent interview with Tobias, Stephen Clapham, author of The Smart Money Method, discussed The Importance Of Pricing Power. Here’s an excerpt from the interview:

Tobias: Just before we move on to that, let’s talk a little bit about quality. What’s your definition of business quality?

Stephen: There isn’t a definition. If there’s a definition, it makes a return invested capital above X. But the problem with the quantitative measures, as I was saying before the algos have worked all this up. There’s a great piece by Rob Barnett, so you’re the Rob Barnett man, so you probably know better than me. But they did a great piece and a very kindly let me reproduce chart in the book. It was incredibly complicated chart, but one of the things that they looked at was the Novy-Marx paper in 2013 and gross profitability. Right. And they did this paper that said that gross profit abilities really worked.

But it’s actually 90% of performance has come because the stocks have been rerated. What that tells you is that people have worked out. So, it was a very effective paper when it came out, but people have read the paper and said, “Hey, this works. Let’s put this into our algo.” And so the opportunity for these things to continue to outperform and give you excess performance, I think it’s highly unlikely that you could find a quantitative measure, which will consistently perform that because they’ve all attracted so much money that you’ve got to pay up in order to buy that.

So, I think, yes, you want to make sure that you’ve got companies that got good quality, high ROIC. But you then got to start thinking about qualitative measures. If people want to think about one thing they should look at, its pricing power because if you have pricing power, you’re safe. So, obviously, that will manifest itself in a good ROIC in high gross profitability. But there may be situations in which the ROI see today isn’t all it might be but the company’s acquired pricing power. And that’s really what you want to look at. Company that’s going through a fundamental change, where it’s not got a fancy valuation today, but not only will the profits improve, because it’s suddenly found its pricing power, but in three years’ time, people are going to go, “Oh, man, look at the ROIC. We better buy some of that,” and the rating goes up. And that’s really what I look for. Companies that aren’t necessarily in favor today, but could be in favor tomorrow. Obviously, it doesn’t always pan out the way you think, but you got a portfolio full of those things, and you’ve done your homework, then enough of them will pay off that you’ll have really outsized returns. And that’s what I try and show in the book.

Tobias: How are you assessing pricing power?

Stephen: Well, it’s very subjective thing, isn’t it? I mean, pricing power to me is, when you go into the shop and you buy the product, you’d wince, but you don’t think about buying something else. No, you’re laughing, but I remember–

Tobias: No, I agree. I’m just laughing at it.

Stephen: I took the family to Florida for a holiday because the kids wanted to go to Disney. I remember going to the agency to buy tickets for Disney and all the other things for the week. When the guy told me the bill, I thought you’d made a mistake. Honestly. [crosstalk] I thought you’d read it wrong, I thought you had an extra zero. And, of course, Disney, guess what? They figured this out. They figured out that it really takes a lot of money before you’ll say no to your kids. It’s going to be really, really expensive.

So, whether it’s 100 bucks a ticket, or 105 bucks a ticket or 110 bucks, it doesn’t really matter. So, that’s this kind of thing to look for. Obviously, it’s well recognized in Disney, but there are other products where you can see the businesses are gradually inching the price up. And it’s quite interesting. I mean, this isn’t very scientific, because you saw with the iPhone. They kept putting the price up. But when it got to $1,000, there was a pushback, wasn’t there? And they then started pushing– Well, I’m not an expert in Apple, but this is my take on it, was that they started producing a range of products at different pricing points because they didn’t have the same take-up from their customer base that they thought they would be, because they thought they could just keep putting prices off forever.

I can afford $1,000 as £1000 pounds for an iPhone, but I can afford it, but I don’t like spending it. I think “Oh, well, you know what? I’ll just keep the phone for another six months, or I’ll just replace the battery. I’ll replace it next year.” Trying to understand where the level is, and there’s no science to any of this. I know nothing about Apple, so I hope you don’t get loads of complaints that I’m talking rubbish because I may well be, I don’t know anything about Apple, but I only have my own personal observation. But when you start to research a stock and look at it closely, then you get a feeling for, is that the right pricing point? And how close is it to the ceiling? And how much room do they have to increase it further? And obviously, if you’re getting in early, then you’ve got a much better opportunity. If you’re getting in late, then you’ve obviously, A, you’ll be paying up and you’ll be paying up in a multiple of the higher price.

So, there are very few companies which have got no price resistance amongst the customer base, and such a moat that nobody can come in and compete with them because of the matter of trying, as a matter of trying to understand. I try and give some examples in the book, the sorts of things that you should look for.

Tobias: Yeah, Apple has a diabolical approach to pricing. They have an iPad out at the moment for $329, but when he actually ended up buying it, it costs you $758 is very, very clever pricing, very clever marketing for that particular object.