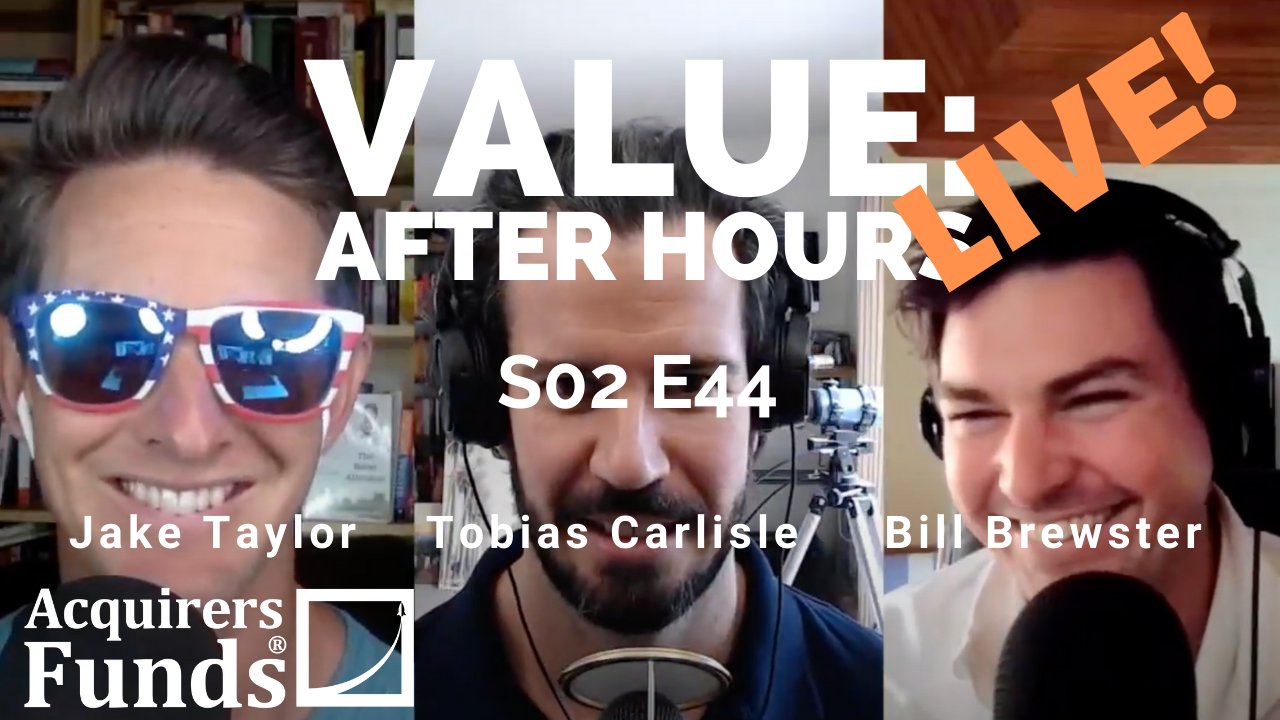 During their recent episode of the VALUE: After Hours Podcast, Taylor, Brewster, and Carlisle discussed Hull Speed. Here’s an excerpt from the episode:

Jake: So, this one is a shoutout to Brian Bryson, 1 of the 10 who put me on to this. Now, I don’t know if you guys know this, and I didn’t really know much about this even though I like sailing and boats and stuff, but there’s this idea called hull speed. It’s this theoretical upper limit of how fast a boat can go. It’s this interesting calculation that is the length of the waterline, which is actually on the boat where it’s in the water from tip to tail.

So, the square root of the length of the waterline times this constant 1.34, I have no idea why that is, equals the hull speed in knots. So, like a 35-foot boat with a 28-foot length of the waterline, theoretically has an upper speed of 7 knots. And the reason why that is, is that any boat that is moving in the water has to shoulder that water away and because water doesn’t compress, the only place that it can really go is up. So, it creates what’s called a bow wave. You’ve seen this, any boat that’s got chugging along like it’s pushing water, and it’s creating this wave out to the sides of it.

Well, the faster that you go, the bigger the bow wave gets. Eventually, you are pushing so much water and it’s actually there’s some math in there with a sinusoidal of the wave and how far it is along the length of the boat. I’m not going to get into that because it’s boring– not that boring is not one of my criteria for this segment.

Jake: But eventually, the boat starts to tip backwards, and the more energy you put in, the faster it goes, the steeper the bow wave becomes. And so, you get diminishing returns. Eventually, you’re adding more, but it’s climbing a steeper wave and it’s not as efficient. So, that’s why that length of the waterline– when you see those really professional rowboats, they’re really long and really skinny. And that is to keep the bow wave to have a higher hull speed because of that length of the waterline. So, all right, interesting enough, but let’s get into some real practical application, maybe.

One of the things about boats is that that drag of any kind really slows you down in the water. Anytime the water has to go around something, it’s very noticeable for a boat. So, things like– if you have weeds hanging off the back of your propeller, if you have barnacles, that’s just more water has to move around and that drag really adds up. I got to thinking, what if sort of your regrets in life or sort of these mental barnacles that make it harder to push through the water of life if you really loaded up with a bunch of barnacles on your whole? That’s number one.

Number two, hard edges of any kind create turbulence in the water. So, there’s these little corners that run along on– some boats, they’ll run along the length of it, they’re called chines. And what it is, most boats have very rounded hulls, and that’s so there are no corners that will create more turbulence. But some boats have these little corners just if they use different kinds of metal. It has me thinking maybe there are behavioral chines and these things, like personality quirks that create turbulence and make it harder for you to go through life and lower your hull speed.

Now, let’s see, next number three. I didn’t realize this, but many times the function of a lot of the sails, especially on the front part of the boat, like the headsail and the spinnaker, the function of it is not actually to catch the wind and create forward propulsion. It’s actually to create upward lift on the boat and reduce the displacement of the boat so it has less water that’s trying to move around.

So, being lighter in the water, it allows it to slip through it easier. And the less water that you have to move out of the way, the smaller the bow wave to slow your hull speed down. So, maybe something different life philosophies, whatever you ascribe to, we’ve talked about stoicism on the show before, Buddhism, Christianity, whatever it is that you’re into, perhaps those kind of mindsets and practices are somewhat like that front sail, setting it in the right way so that you catch the wind and lift your boat a little bit out of the water, having that sort of operating system and help.

Especially things like unattachment, which is a very popular thing in Buddhism. You have much less attachment. It’s sort of like raising your boat out of the water a little bit, it’s not loaded down too much with emotions, and all the negative feelings that can come from when we’re barraged, which is probably a good thing to think about today if you’re worried about election results and feeling triggered.

The last thing is that length of the waterline of the boat, what if that is sort of like the resources that you have at your disposal. The longer the better. Things like knowledge or money or time or your focus or your effort, all of those things, resources, creating that longer waterline allow you to either move more efficiently through life or faster. With less drag and making less bow waves, potentially. So, that’s all I could come up with using a little bit of tortured analogy of hull displacement and how does that relate to life.

Tobias: I liked it. I wasn’t sure what the analogy was going to be for. But I think it’s a good one, it’s an appropriate one for today, taking the barnacles off the hull, great idea. Lifting up out of the water, another great idea. One of the ways that I do that is I go back and I look at what historical figures have done, have dealt with much more thorny problems that most of us will deal with in our lives.