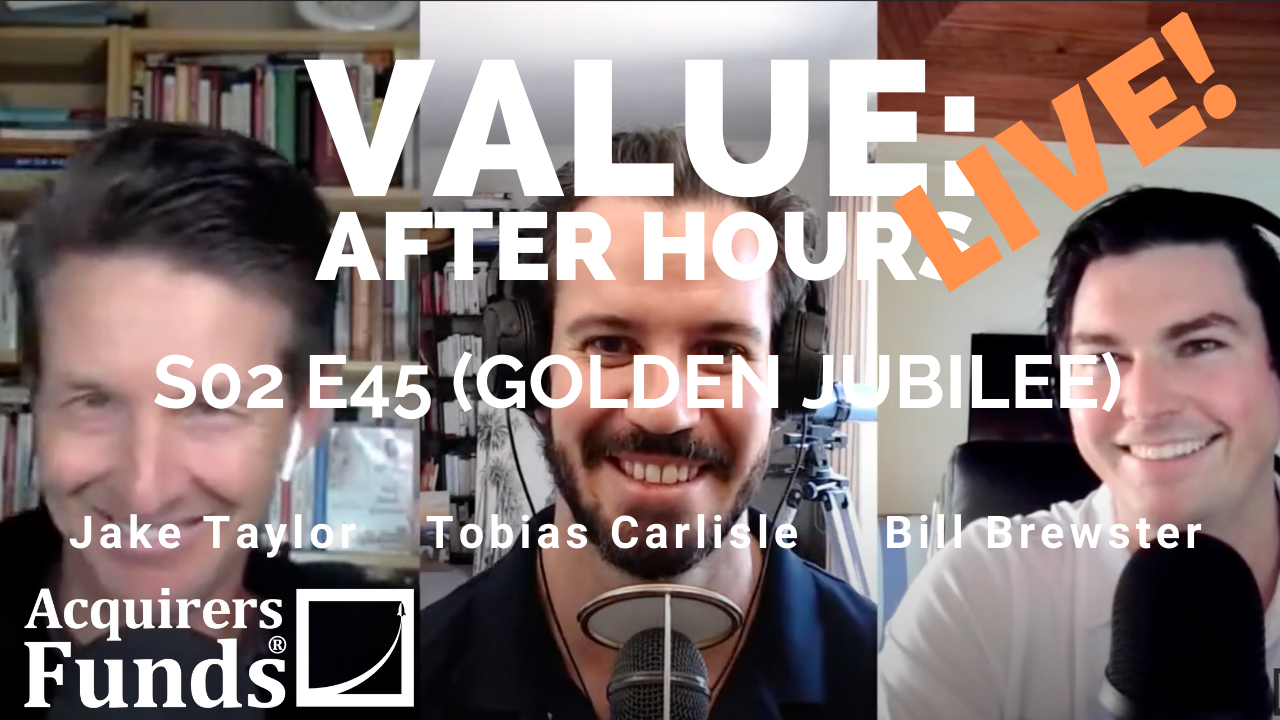 During their recent episode of the VALUE: After Hours Podcast, Taylor, Brewster, and Carlisle discussed Combining Fundamental And Technical Analysis. Here’s an excerpt from the episode:

Tobias: So, here’s a philosophical question. What is your disagreement to creating a dumbbell portfolio value and growth with? I’m guessing fundamental analysis for value and technical analysis for growth or growth indices, assuming it’s not reading chicken gizzards.

Jake: I don’t know enough about technical to say one way or the other about its merits. I think there is something to the crowd’s psychology of it and it’s picking up and probably capitalizing on other human biases. They’re just not as readily obvious to me. And I find it harder to– and listen, you have to be very a deep believer in whatever strategy that you’re running because you will get tested. And so, if it makes sense to you, the market will push you out of that approach by testing you. If I’m half-assed on technicals, I’m just going to– I will quit readily, so I’m not even going to start. That’s kind of my logic.

Tobias: If you want to do it, I think that you want to use– like this momentum is a pretty well– I guess that’s momentum is technically technical. [chuckles] But I think that the research on it is pretty robust. From what I understand talking to the guys who implement momentum, they think that it’s a better way of identifying fundamental income growth, fundamental earnings growth, or fundamental revenue growth, they just use– And I think that they include earnings momentum as well in their analysis, it’s not purely price momentum. So, I think that’s a very common construction to have some portion of the book in momentum and some portion of the book in value. It’s not the way I want to do it, though, but I think it’s perfectly fine for anybody who wants to do it.

Bill: I guess the thing that I don’t like about this strategy is to Jake’s point earlier about, like how the probability of loss, I think, is objectively higher from a frequency standpoint when you’re fishing in a really expensive pond. And I guess that on one hand, you could cut your losses quicker with technical analysis. But on the other, I think that you’re probably going to see more volatility when you’re playing that game. I mean, I would need to see statistically whether or not I’m right, but–

Jake: My hunch is also that it’s probably the wrong time to be thinking about that one if you’re long only momentum.

Bill: Yeah, well, if you’re going to buy Snowflake and you’re fundamental, I wouldn’t sell that based on technical reasons. That doesn’t make a whole lot– I would buy that knowing I could take a 50% drawdown in this tomorrow because people just change their mind in the future. So, I just don’t know that I understand about selling because the technical is there. The barbell strategy makes sense to me.

Tobias: One of the things that Jim O’Shaughnessy points out on his– I think it’s in What Works on Wall Street, is that momentum is not necessarily buying the most expensive stocks. I think the stuff that it’s buying stuff, it’s largely unknown started to move.

Jake: Value is going to be momentum soon.

Bill: Well, that’s actually where I would be most inclined to use technicals, is looking in deep value and looking for breakouts. That would be where I would be like, “Okay, is momentum starting to go into this name?” because then you start to get like fun flows going in your favor and stuff like that. Once you’re messing around like $60 billion evaluations, who’s the incremental buyer and how quick do they–? I know that that’s trader talk, but it’s also real, unless you’re going to hold it until the cash flows develop, which– y’all lock up capital for a long, long time if you’re going to play that game and you’ve got to be right, not the easiest thing.