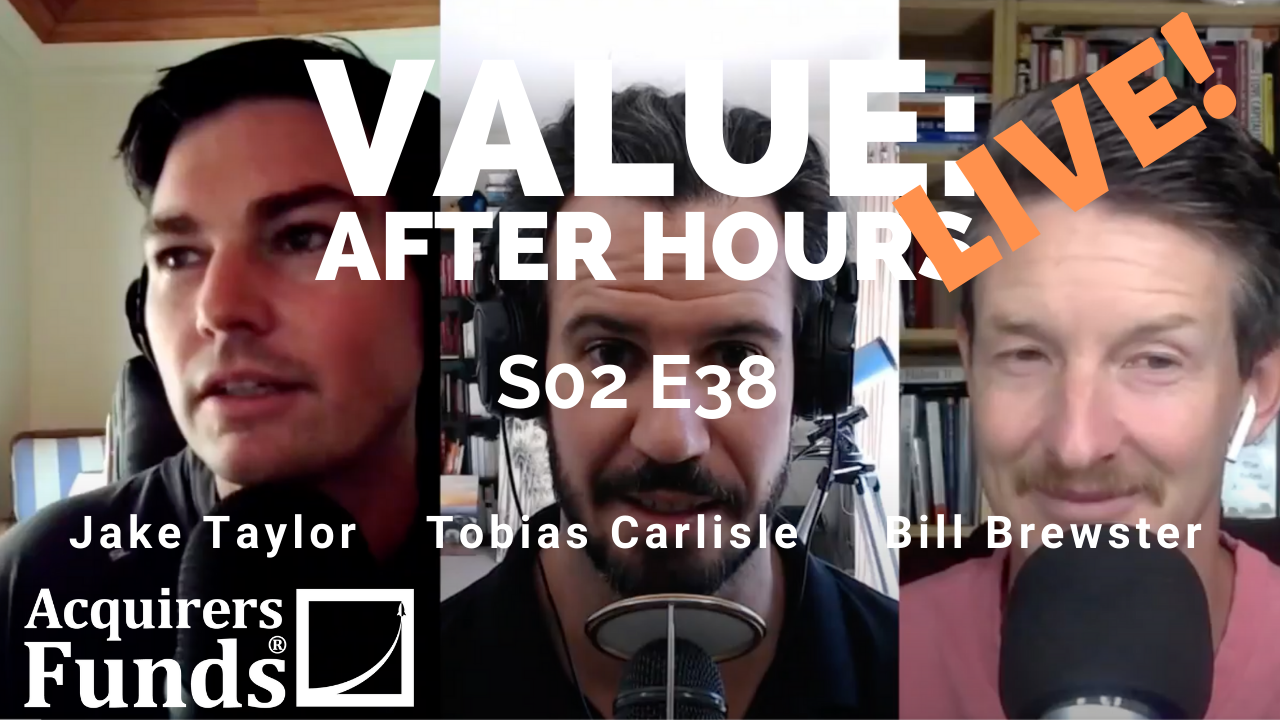 During their recent episode of the VALUE: After Hours Podcast, Taylor, Brewster, and Carlisle discussed Cicadas, Parasites And Prime Numbers. Here’s an excerpt from the episode:

Jake: All right. Let’s talk about investment cicadas. I’m going to start off with a little quote that I found that I really liked it. It’s from John Wheeler, who was a theoretical physicist around the same time as Feynman. They work together on the Manhattan Project. He said, “Time is nature’s way of keeping everything from happening at once.”

Jake: It is really nice, isn’t it? A cicada is this little insect, if you don’t know. And there’s a species of cicada that has the longest lifespan of any insect. And most of its life, it lives underground as a nymph, and it sucks the juices out of tree roots for 16 years, not doing much. And every 17 years, it will emerge as an adult cicada. These vast numbers, it’ll mate, it’ll lay eggs, and then it’ll die. And curiously, there’s another species of cicada that emerges every 13 years. So, what do the number 13 and the number 17 have in common?

Jake: We didn’t give him that answer beforehand either, by the way. [laughs] Yes, they’re both prime numbers. What’s interesting about that is that one theory is that this has to do with actually parasite avoidance. A parasite on the cicada. Why that maybe makes some sense is, if you imagined a parasite that had a life cycle that was every two to three years, there’d be a lot more potential for overlap because of the way the numbers divide together. So, nothing divides into the number 13 or the number 17. That’s what a prime number is. Only divide it by one.

If a parasite had a two-year lifecycle, it would only meet its host every 34 years on average, and it gets really hard for that parasite to evolve because it would require it to sit there for 16 years with no host. The cicadas’ really long lifecycle and being a prime number protects it from parasites potentially. And what’s interesting is that they’ve never actually found a parasite on the cicada. So, it’s almost like the dog that didn’t bark. The guess is, is that it’s because of that. All right, what does this have to do with investing tenuously?

The idea is really that, that nothing works all of the time in the investment world. If it did, there would be someone who would start copying you, or even maybe being a parasite on you. So, you need these long periods where it’s hard, and you’re underground just sucking on the tree roots, and you’re just a little nymph.

Bill: Dude, I’m not sure that you’re handling this whole thing okay.

Jake: I know, I’m not. But let’s think about like–

Jake: Well, let’s think about Charlie Munger. He is an investment cicada, the way that he’s run Daily Journal’s portfolio. He sat there in T-bills, sucking tree roots for a long time. And then it got to be time to push the chips in and he bought Wells Fargo and Bank of America in like 2010, 2011, paid really good prices for it, and had terrific returns over that whole time period because of a couple of little moves during a very unique window. And he had the patience to do that.

Bill: I will tell you what, to the young kids who listen to this, that strategy requires massive balls. Very, very few people [crosstalk] to do that.

Bill: They do it though. The way that they run concentrated portfolios, one of the things that I think is somewhat dangerous about what people hear Buffett say when he says, I’d have 50% of my portfolio in my favorite securities, that’s Buffett. Just be very honest with yourself if you’re as smart as Buffett.

Jake: Yeah, you’re not. However, I think the three of us need to start a SPAC with the express–

Jake: –mandate of investing the money one time per decade. And otherwise, we just sit in T-bills waiting for the opportunity. Who is in– [crosstalk]

Bill: Can I just propose an alternative solution to invest the money in after-hours activities?

Bill: To go along with the name.

Jake: That’s what the management fee is for.

Jake: But we wait, once a decade we’ll deploy in peak pessimism.

Jake: I misread the document– [crosstalk]

Tobias: Can we just go back to the– The 13 year and the 17 year, if you’re the 17-year cicada, are they all coming out at the same time, or there are this one species, they could come at any given year, but it’s the same species on a 17-year cycle.

Jake: The same species is synced up together [crosstalk] 17.

Tobias: They’re all synced up together.

Jake: Yeah, they come out in this cloud of bugs, and they do their business, and then they die. And then, their kids go back underground for another 17 years basically.

Tobias: I lived in an area that had cicadas come out, cicadas as we call them. They come out– I think it was on like a seven-year cycle, which I think that’s also a prime. Yeah, so I saw a few. They come out like a cloud. They’re pretty big, like they’re an inch or two long, and then they leave their husks all over the place because they’re growing so fast and splitting and disappearing. So, as a kid, you run around and collect these one- or two-inch cicada husks. Pretty fun.

Jake: What do you do with those?

Bill: How far inland were you growing up?

Jake: All the way. [laughs]

Bill: [chuckles] Right in the middle of the desert.

Bill: It’s like value is the only book at the library. [laughs]

Tobias: There were no books in the library.

Jake: Yeah, what library? [laughs] How cool is it though that nature found prime numbers on its own?

Bill: Dude, it’s wild. The Fibonacci sequences are everywhere too.

Tobias: Well, they would have been cicadas that were 1, 2, 3 and so on. And those ones, they got full of the parasites. It’s almost like a reverse black swan. It’s the good thing that happens– I guess it’s a little bit more predictable than a black swan, but it’s– 17 years is a long time. You don’t see many of those in your life.

Jake: [crosstalk] –the 16-year parasite. That’s an overlap of every 272 years, it’s 16 times 17. So, dude, there’s no way that parasite’s going to make it that long, that many generations to get to you. I mean, it’s genius, really. I love nature. So amazing.

Tobias: Yeah, that’s astonishing. The parasite thing is interesting too, because there are– the 13F filings that hedge fund managers or big institutional investors have to file, they create parasites, they create hangers-on. I’d be guessing that there aren’t many value parasites left because the performance has been so bad. We were talking about–

Jake: The value parasites though, do you think that those have been sloughed off yet?

Bill: Well, I look at the WhaleWisdom 13F holdings, so you can see who are the most popular ones in there. Baupost continues one of the most popular in there, which I found– I was a little bit surprised by that because it’s not– that’s not a particularly popular name.

Jake: There’s some weird often too. Yeah. That is surprising.

Tobias: And you don’t see the whole portfolio because they’ve got such a big private equity debt portfolio there as well. You just see–

Tobias: Do you think they’re going through those 13F filings? I’m going to load up on eBay, whatever their biggest holding is?

Jake: It’s a chart of a price. And if that looks like it’s just going to keep going up in a straight line, you buy it.

Tobias: Yeah. That actually makes more sense to me than value investing.

Bill: I need to be careful with what I say about this company.

Tobias: All right, folks, throw any questions. Let us know what–