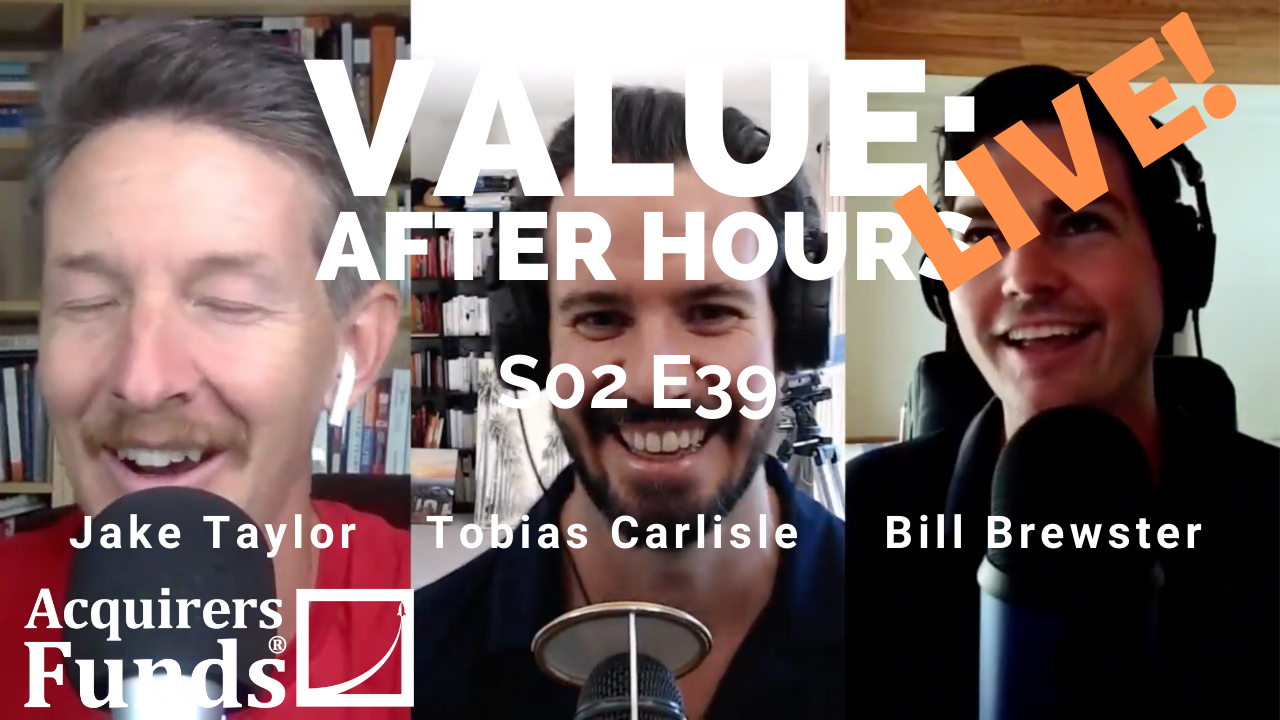 During their recent episode of the VALUE: After Hours Podcast, Taylor, Brewster, and Carlisle discussed Business Code Breaking. Here’s an excerpt from the episode:

Jake: All right. Let’s go back to 1940 London, and you’re walking down the street and the siren goes off, and people nonchalantly start walking towards the tube entrances, and they go down there. And all of a sudden, the bombing starts. This is the bombing that Germany was doing of England at that time during World War II. It always amazed me how people have learned how to live with that, constant fear of death happening at any time.

But what’s interesting is, if you’ve seen the movie, The Imitation Game, some of this will be familiar, but the Germans had this coding machine that was called the Enigma machine. It was basically a keyboard that was connected to this scrambling unit. The scrambler unit had three separate rotors on it. Those positions of the rotors would tell how each letter would be coded and ciphered. The way the math worked out, there were three rotors to choose from a five, and each rotor had 26 different positions on it. So, right there, you get more than one million configurations that can happen. And then, there was a plug-board on the back of the Enigma machine that the wires would connect to with the keyboard and those had different positions that could be programmed. Before you knew it, it had 150 million, million, million different setups. And the rotors would change after every single letter. So, you would put it in there, the rotors would change the next one.

So, Alan Turing was this very, very famous early– call him a computer scientist, mathematician. He tried to crack the German code using this machine that he had created. What was difficult was that they were racing the clock as far as getting the signal, and then trying to decipher it before whatever the outcome was. Let’s say that German Navy had said like, “Go sink this ship,” they’re racing the clock to figure out, like which ship was in danger before the Germans were able to take the action. Every message would contain clues for the codebreakers to help them narrow down that 150, whatever that is, quadrillion permutations. So, the Germans to counter that would keep their messages short so that there were less words that could be keyed off of.

What the English would do is they would look for often weather reports because they would have words like fog or wind speed in them. And then, they could get those letters deciphered and then back into it and shrink down the available number of permutations. So, they would crack it on one day, they guess at it, and then for the rest of the day, they could decode it.

But then the next day, it was back to the grind and trying to decode it and basically save lives. One thing they would do is they would ask the Royal Air Force to drop mines into a certain harbor, so then they could pick up that message from the harbormaster that said either like the word ‘mine’ or ‘avoid’ or something like that, so they were sort of seeding what they could get out of the codes. To counter that in 1942, the Germans added a fourth wheel to the Enigma machine, which then exploded the permutations even further. What this did was it allowed the British to have advanced warnings of when the Luftwaffe was going to be attacking, and it ended up saving millions and millions of lives.

Now, what was interesting was that they had to be careful not to show their hand because then the Germans would escalate their encryption even further. There were rumors that Churchill actually allowed a really devastating raid to happen on Coventry because they were worried that the Germans were getting wise that the English were cracking the codes.

So, there’s a saying that, “Where there’s mystery, there’s margin.” Peter Thiel talks about monopolies and how they’re very quiet about it. They won’t tell you that they have a monopoly. If anything, they will reframe the whole discussion around the market size that they’re tackling into bigger buckets so that they look like a smaller portion of it, even though they’re maybe dominating that niche that they’re actually operating in. And maybe like a medium ROIC business that’s just cruising along at 10% to 20% maybe and avoiding competition for a really long stretch is sort of that, it seems suboptimal.

But from a game theory standpoint, maybe it’s exactly optimal, similar to the codebreakers not wanting to tip their hand that they had something special going on. That they were winning, and you want to be quiet about it when you’re winning. And maybe even you’re investing in moonshots, or maybe you have to go public, so that it feels like everyone can win because of this because it’s just two guys that are cashing all these checks.

You find some magic lamp that just prints money, you have to be careful what you do with that. You’ve got to be quiet, someone might want to take that away from you. So maybe you have to do things that appear very suboptimal to hide the fact that you are capable of winning and sort of breaking the business code. Guys, got any thoughts on that?

Tobias: Yeah, I just wanted to– there’s up on the screen now, Cryptonomicon. Thanks, Robinson, that a fantastic book by Neal Stephenson, one of my favorite authors. There’s a three-book series about breaking the Enigma code and all that followed on from the ground. It’s fictionalized, but it’s a fun read. Yeah, it’s fascinating that– they’d cracked it and then they had to pretend– if they knew where a convoy was going, they’d send out a spotter plane. So, they could say, “Well, the spotter saw the convoy before we bombed it. That’s how we came up with that information,” rather than “we cracked the code.”

Jake: Just showing up with the– Yeah.

Tobias: Yeah, I think it’s fascinating. The example that you gave is fascinating as well. I wonder if there are others that are like that, disguising how profitable they really are to avoid competition. Do you think it matters though, if you’re that entrenched? And what are you trying to avoid, regulation?

Jake: Yeah, I think regulation. High ROIC is going to attract competition eventually. So, you want to be quiet about it, maybe cloud it with some other expenditures, maybe even carry extra employees that you don’t even need. Maybe. Just to keep it down a little bit. You’re still going to be making plenty of money. Maybe you’re playing a little bit of a longer game as opposed to trying to win this very short timeframe at a maximum. It’s a longer optimization.

Bill: People say this is what Facebook’s doing, with a lot of their spend. They’re spending so much to hide how profitable they really are.

Bill: Might be true, I don’t know. Thing that sucks for them is they can’t really sell their data center space because no one trusts them. It’d be nice if they could enter the Amazon, Microsoft, Google party, but you’re going to give you stuff to Facebook? Really? Okay.

Tobias: Well, why is Google any better?

Bill: They have a brand of trust, and Facebook has a brand of not trust.

Tobias: My Fitbit. Yeah, if they come to blackmail me, I’m gone. [laughs] I’ll just pay that ransom. I probably already do. Yes, so Google— But then, I don’t log into Facebook at all.

Tobias: Yeah, the whatever that Meet thing is that they have.

Bill: It’s odd, especially since Zoom can be worth $140 billion not charging anybody anything. I know they actually have revenue, folks. It’s a joke.

Jake: Target on your back.

Bill: I mean $200 billion, that moves the needle for all these guys. So, how much more can you compound before they try to kill you? Now, people can be like, “Oh, they can’t kill Zoom.” [crosstalk]

Tobias: Revenue’s not that impressive though.

Bill: To be fair on the share base comp, not that– I would just say if I was running these companies, I would be doing the exact same thing.

Tobias: 100%. I’m not criticizing them doing it. I’m criticizing buying it, expecting that it doesn’t count.

Bill: I understand. I do think though sometimes my brain has criticized some of them for overinflated SG&A and overinflated share-based compensation. And then, I think, well, then again, if the market is going to reward you with this valuation for revenue growth, why the hell wouldn’t you just do everything you possibly can to pour gasoline on all your revenue growth? You’re selling options into a pretty rich market. I’d be doing the same thing, I’d be like nobody gives a shit if I generate any cash. Everybody’s willing to finance everything, I can issue shares like crazy and I can sell options and buy a mansion. Why would you not do that? It would be stupid not to do that.