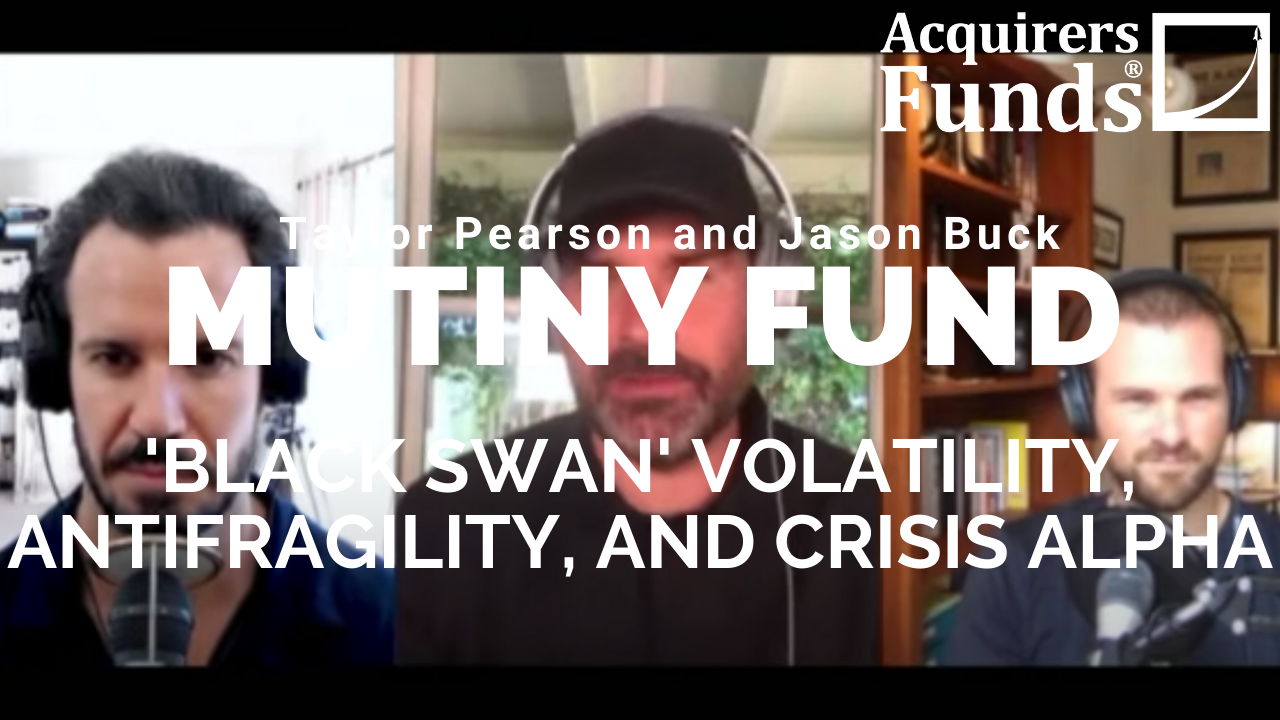 During their recent interview with Tobias, Jason Buck and Taylor Pearson of The Mutiny Fund discussed Antifragility. Here’s an excerpt from the interview:

Tobias: I read Taleb’s more readable book, not Black Swan. The one–

Taylor: I agree that this is his most readable book. That’s the one– [crosstalk]

Tobias: Honestly, I couldn’t get through the other ones, I’m sorry.

Taylor: That one was successful and so then he could just tell the editors to fuck off and do whatever he wanted. Fooled by Randomness, he wasn’t that big and so he had to do what the editors told him to do, so that got streamlined, but then after that, he was like, yeah.

Tobias: “I’m the bloke who sold 3 million books. So, I’m going to give you the manuscript and you’re going to publish it.”

Tobias: Yeah, that first book was spectacular. When I talked to Chris, I was like, “Oh, here we go. This is how you actually implement this strategy.” And this makes total sense to me. Everybody underweights the tails because they happen so infrequently. Everybody’s clustered around the mean, buy the tail, sell the mean, this game is really easy. And then, the thing that Gladwell points out, Gladwell wrote an article about him, I think it’s called the Blow Up or something like that. And he said, the only thing basically that can happen to you is you can just bleed out. And I was like, “Yeah, but these things happen so frequently.

The thousand-year storm rolls around every seven years. You’re not going to bleed out.” Of course, here we go into one of the longest periods of volatility suppression. I see it happen to get value guys wind up their funds. It’s one of those things– I find value so compelling from a theoretical logical standpoint, how could you ever not do value? And then, you realize that there are these very, very long periods of time where it doesn’t work. And the reason that value starts working again is all the other value funds just get wound up, they just disappear.

Jason: [laughs] Exactly. Yeah, you know that pain of looking back over long time periods. But part of it though, where we take a bit of umbrage with that people don’t consistently look at is the holistic effects of your portfolio. And I think Mark Spitznagel at Universa, which is Taleb’s partner, Mark actually runs Universa, is that the way he explains it so well, is it’s a combination. So, if you use Universa, let’s say it’s a negative 3% bleed, just to throw out some numbers. But they’re allowing you then to carry 97% exposure to the S&P, and let’s say they’re truncating your left tail at negative 15 to negative 20% moves, and you’re blocked off from that down. And so, the combination of that rebalancing over multiple business cycles, actually, you end up ahead.

So, it’s a weird thing. It’s more about actually being able to hold more implicit short volatility assets, long GDP assets, and comfortably hold those and rebalance and compound wealth better over time. But everybody only looks at that line item. So, a lot of the arguments this year from like AQR, etc., were just talking about the line item and not talking about the holistic portfolio construction, and what that allows you to do to compound your personal wealth and savings over time. For example, I think that Universa is likely cherry-picking the timeframes as we all do, but that combination compounded at 11% or 60/40 was compounding at like 6% to 7% over the similar timeframes.