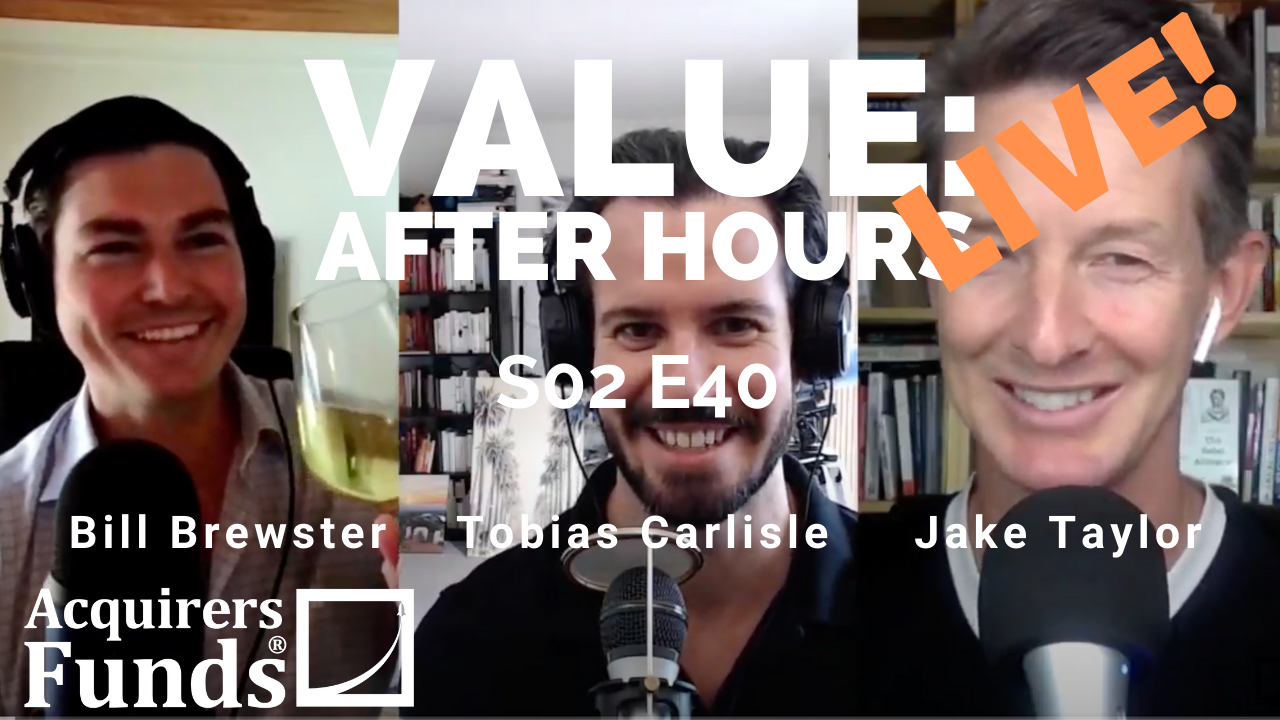 During their recent episode of the VALUE: After Hours Podcast, Taylor, Brewster, and Carlisle discussed Absolute Versus Relative Value. Here’s an excerpt from the episode:

Jake: So, the quote number two is even a little bit more elaboration on that last part. “The first thing a gambler has to do is make friends with himself. A lot of people go through the world thinking there’s somebody else.” So, in my mind, that’s like, “Alright, just own up that you’re either growth versus value, or absolute versus relative,” which I think is ignored a lot in this– I don’t know why, but absolute versus relative to me is even more ignored than most things.

Tobias: Let’s talk about that a little bit. What is absolute versus relative?

Jake: I think it’s somebody who wants to actually make a positive return on their investment over a long– [crosstalk]

Jake: –that time. The other one is more like, “I want to beat the market, over whatever time period.”

Jake: You think so?

Bill: Yeah, I do. I think absolute saying, I want 10% three years out, no matter what. And then relatively saying, if these two assets are trading at a certain price relative to each other, they’re in the same space and this one’s maybe a little bit growth here, but a little bit cheaper, so I’m going to buy this. That’s how I think of the two of them.

And then, I think you’ve got probably a blend is the answer where you have a sanity check, where you’re like, “Okay, maybe if I’m comping things at 50 or 60 times sales, it’s got a little bit out of control, and I should not quite be on absolute.” That said, if it’s really small, I understand small and expensive if you really think it can grow. [crosstalk] –expensive is a bad combo.

Tobias: Even an absolute investor has to be looking at the other opportunities. So, your opportunities might be, you sit in cash until you find something that gets over your hurdle. But you should be reducing your hurdle if the return that you’re getting on your cash is lower, shouldn’t you? Or is that a– [crosstalk]

Bill: Dude, I don’t want to be your first army soldiers. You’re sending them out there to die. “Yeah, we’re fine. We got more.”

Tobias: That’s what the pawns are for.

Jake: It’s pawns versus protecting your queen later. You want your queen when the chips are really down.

Tobias: I always find that relative absolute debate– I frankly don’t fully understand it because I think that even absolute investors must be looking at–

Bill: Yeah, I mean, so I was listening to the 7 Investing podcast that they were talking about, I think it was chips. And the guy that was being interviewed, he said, “There’s no more absolute valuation in this space. It’s mostly relative.” And I think his point was like– [crosstalk]

Tobias: Everything is expensive?

Bill: Yeah, that was my sense from him. And if you’re going to continue to buy, what you’re buying on now is more, okay, I’ve accepted that this space is rerated up within me accepting that. I think that this is a good bet, relative to the other bets that I could make. That’s how I interpreted his statement. But he also may be wrong, my interpretation of him may be wrong.

Tobias: You must be exposed to those businesses. You have to have some exposure.

Bill: I don’t know, dude, I think some people just want to own stuff that’s in a secular growth-type industry, and it’s easier to own and maybe it’s easier to sell the clients, and maybe don’t give a shit because you can keep assets and you can tell people you’re doing something intelligent.

Jake: Or maybe you have to keep up with some benchmark in order to keep those assets. And so, you’re more of a relative investor.

Bill: Or maybe you believe it. I mean, that’s possible, too. Right?

Jake: You don’t have to.

Bill: Yeah, but you could.

Tobias: I mean, that might be true. I’m just trying to understand the basis for the rationale. That’s what I’m trying to understand. Are you like, “Yeah, it’s all expensive”? But because we got to do it, this is the one I’m going to do it because this is the least egregious or this is the best opportunity of the lot. Or is it somebody else is like, “All that stuff is now really, really expensive. I’ll get it later when it comes back to Earth if it’s a bit cheaper,” or not, because I don’t have to hold it.

Bill: I mean, my personal opinion of what’s going on, and I was happy to hear Modest Proposal say it as well, I think that people right now are willing to pay up for business certainty because it’s either easier to stomach emotionally or it’s easier to sell to their clients. I think that it has created an opportunity set in the market that if you’re willing to do the work and have the stomach to deal with some really shitty quotational indigestion in between and if you can truly be long term three to four years, I think that there’s some interesting swing trade opportunities out there.

Bill: Yeah, well, like an intermediate swing trade? I mean, that’s basically what– I’m going to talk about Spirit, that’s basically a swing trade. It’s not an asset I want to own for 20 years, but guess what? Everybody talks about 20 years, y’all are full of shit, your investment horizon’s like four to five years max or until March. I don’t want to hear 20 years. That’s fucking nonsense.

Tobias: Three to five is right.

Jake: Bill’s going to be in rare form in like 15 minutes, so let’s– all right.

Bill: I think I just got provoked. That does really bother me though. All these ROIC discussions. Everybody’s “Oh, well, you can pay a ton, you just have to extend your time horizon.” Yeah, that’s cute in theory, dumbass. I watch people capitulate. That’s exactly what capitulation is. It’s people no longer believing when it was easy to say when your duration was forever. So, unless you’re one of the people that was buying in March, I don’t want to hear that shit out of you. It’s my personal opinion. More wine, and nice.

Jake: That’s fair. All right, back to Puggy. “I believe in logics, cut and dried, two and two ain’t nothing in this world but four. But them suckers always think it’s something different. I play percentages in everything.”

Tobias: Here we go. A quant or a value guy.

Tobias: Fundamentalist rather than a quant.

Bill: The thing about the odds and I had said it, I don’t know if I’d said it on the show or not. But for so long, I think I like really fucked up how I looked at the world by– I had this thing in my head, look down, not up. And really the thing that I should have told myself is think about the skew. It would have been a much more useful framework for my brain because I had turned off the ability to see the odds because I didn’t allow myself to get creative enough on the upside. It was a mistake.

Tobias: Do you think that–

Jake: That’s [crosstalk] in every bull market, though.

Tobias: Yeah, that’s what I was about to say.