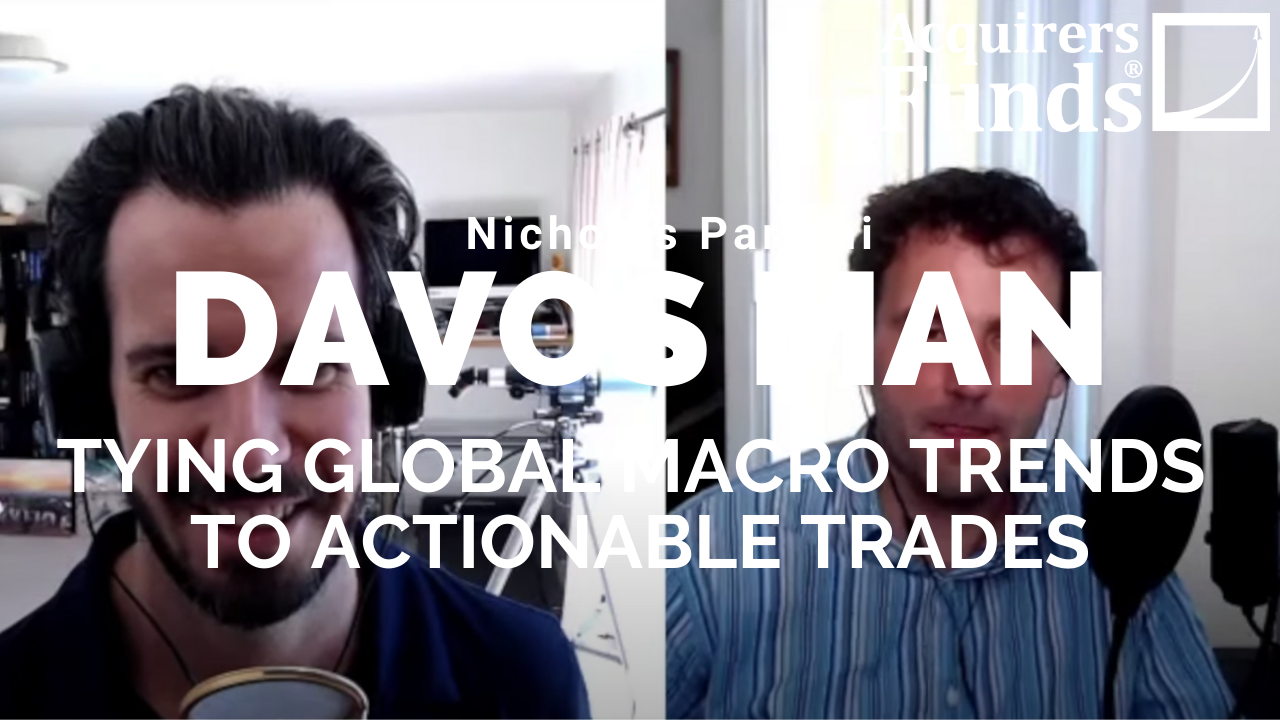 During his recent interview with Tobias, Nicholas Pardini, Managing Partner at Davos Investment Group discussed 70’s stagflation. Here’s an excerpt from the interview:

Tobias Carlisle:
Is that new though? That hardcore money printing has been going on for more than 10 years now. You know that famous interactive brokers ad where they have all of the investment banks shooting out piles of money, that’s got to be 10 years old, that ad.

Nicholas Pardini:
Yes, the difference between now and, say, 10 years ago, is that, where the money is being sent to. I think one of the big potential macro catalysts is whether Western societies adopt a universal basic income scheme or not. I think that might be the defining issue of the 2020 and 2024 elections coming up, because if you have all this inflation in terms of increase of money supply, and it actually gets into the hands of people who are most propensity to just spend it, then you’ll actually start seeing an increase in velocity of money and price level. The QE inflation from, say, 2009 to very recently, it increased real estate prices and asset prices, because it just was in the form of lending, and the only people who had access to credit were those who already had money to spend on risk assets.

Nicholas Pardini:
And also, you had massive deflation, or just no price appreciation in general things that people spend money on outside of housing, such as food, such as transportation. If you look at, example, airlines, prior to this event, airlines relative to average wages has been all time lows. That’s why we’ve had such a big boom in tourism. And consumer goods, and everything except, really, for housing, health care and education, food prices, energy, all fell drastically the last 10 years relative to incomes. And because of that, people were able to spend a larger percentage of their disposable income on rent and mortgages. If you start to see the prices of other stuff increase, especially given how low of a base we have now on a lot of commodities, the remaining amount of money to be spent on rent and mortgages as a percent of income is just, isn’t available anymore.

Nicholas Pardini:
So I think you’ll have the reverse type of inflation where housing inflation will be flat or lower than general CPI, and other goods will be much higher.

Tobias Carlisle:
So what’s a good analog for that? Is it 70s with stagflation?

Nicholas Pardini:
I think it was 70s on the lighter scale, I would say. It would take a lot … I mean, if you look at just the debt to GDP levels of the US, if we were trying to get debt GDP back down to pre ’08 levels, which would be 60% of GDP and maintain the 2019 deficit, which was 4.6% of GDP. Then you would need to have inflation average 9.2% to get those real debt levels down. I don’t really think anybody has the goal of getting debt to GDP down to 60%, but I think you could see a consistent four to 6% inflation rate. The tricky part is that, will you see in the CPI? Because all the political incentives in terms of COLA adjustments and tax brackets, and a variety of other fiscal issues, have incentives to keep that down.

Nicholas Pardini:
I mean, that’s how China has incentives to keep its GDP up to keep all their regional governors paid. You have a similar incentive problem. I mean, America has a better quality of data and more freedom than they do in China, so it’s harder to pull that thing off, but the incentives are there to do it, which makes this a little bit trickier of a trade.