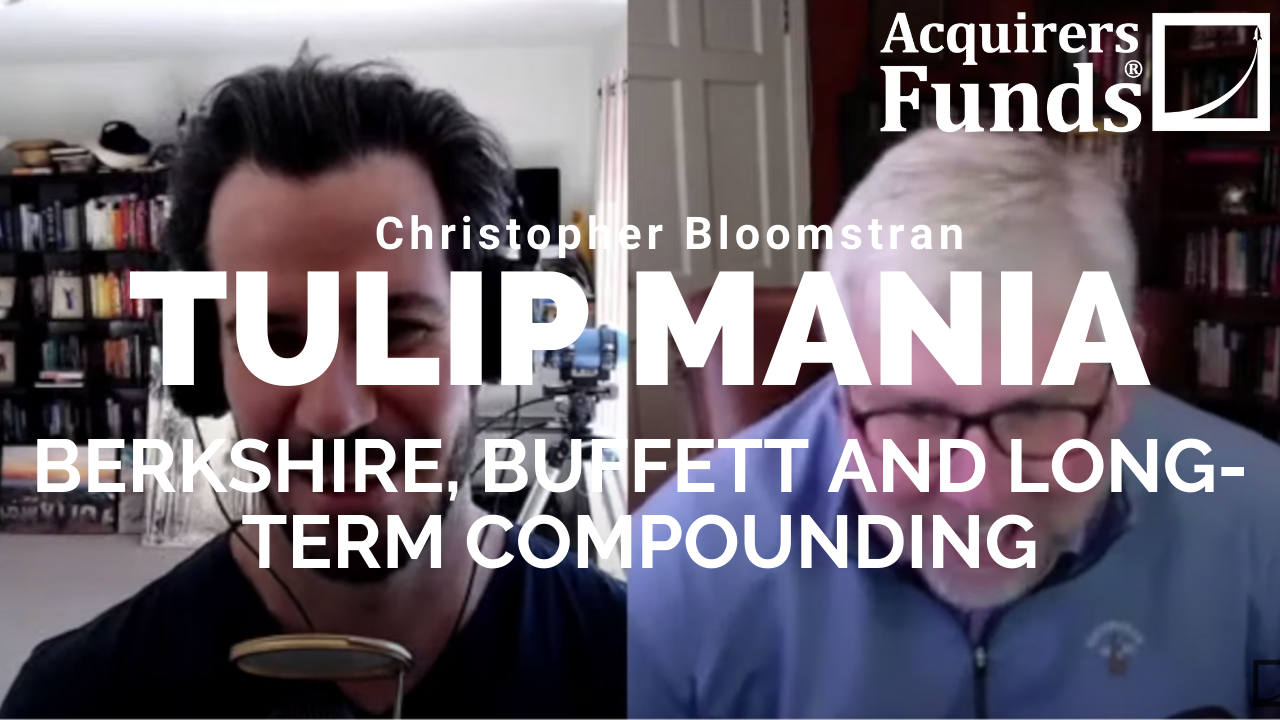 During his recent interview with Tobias, Christopher Bloomstran, President and CIO of Semper Augustus Investments Group discussed The Unappreciated Brilliance Of The Gen Re Transaction. Here’s an excerpt from the interview:

Tobias Carlisle:
Yeah, I couldn’t agree more. That was the first time I’ve ever bought Berkshire was on the 20th of March for my own portfolio. I’ve just never seen it that cheap. I tend to be at the deeper end of the deep value scale, so I think it’s got down cheap enough for someone who likes to pay as little as I do. You touched on it very briefly there, Jake Taylor alerted me to this. I hadn’t appreciated the elegance of the Gen Re deal previously. Could you just repeat what you… just tell that story one more time, just so folks understand what Buffett actually achieved with that acquisition?

Chris Bloomstran:
It was incredible. The success that Berkshire Hathaway had, had from the time they bought National Indemnity in 1967 and got into the insurance game, the success they had investing their surplus capital on their float in common stocks was extraordinary. Post the 1973 bear market that took the S&P and the Dow down by almost 50% from that period, from the mid ’70s through 1998 and you had this phenomenal bull market. You could either mark the low to late 1974 where the Dow had fallen from 1000 to 554 I think it was. Or in 1982 where the Dow had fallen from 1000 again back down to 778.

Chris Bloomstran:
I mean, there were 17 years, 16 years from 1966 when the Dow first traded at 1000 to where it didn’t really break above 1000 you went through these rallies and these sell off. So it was just a long bear market during a period where inflation was very high. Peak to trough from the peak in 1966 to 1982 investors in the Dow or the S&P lost 75% of the purchasing power of their capital. So you were down 25% in price in 1982 from the 1000 peak to the 778, you made some dividends. But stocks were wildly inexpensive. In 1982 profit margins had been wiped out. We were dealing with the inflation margins had fallen from 6.5% of their highs to 3% and stocks traded at seven times earnings. You were paying seven times for a 3% profit margin, which becomes 21% of sales. And so regardless, during the bull market that for Berkshire’s and Berkshire shares and the stocks they invested in ended in 98 didn’t end in 2000. They ended in 98. That’s when Coke peaked.

Chris Bloomstran:
Coke had grown to 45% of Berkshire stock portfolio. Now they’d bought it for the first time in 1988 after the stock market crash. And Berkshire had made something like 13 times their money just on the Coke piece. But everything that they did, I’ve seen studies and I’ve seen a lot of naysayers that criticized the success of Berkshire and even an academic paper by research affiliates that came out a couple of years ago, tried to run a factor analysis of replicating what was important to Berkshire’s portfolio. And I think they got two variables, beta and a price to book maybe it was one.

Tobias Carlisle:
It’s quality. It’s at 1Q 01 and they said it was 1.6 times leveraged and it was to quality.

Chris Bloomstran:
That was a thoughtful paper and well-intentioned. But they also assumed that over the duration of the history of Berkshire, this 55, 56, 57 years that you would have operated your common stock portfolio 70% leverage. Berkshire’s has not operated at 70% leverage. There’s a genuine lack of understanding of how insurance float and surplus capital works. That was not a 70% levered portfolio. And if it was, and you were simply a common stock investor, you couldn’t have survived 73, 74 or you wouldn’t have survived the 87 crash or you wouldn’t have survived the ’08, ’09. A well-intentioned study, but set it aside, Mr. Buffett, when he bought Coca-Cola in 1998 and through ’89 I’m sure it was not thinking about beta or priced to book, he was thinking about the moat that exists around Coca Cola and how many servings of soda these people were going to sell 10 years from now and 20 years from now and how the capital structure of the farm worked and then all of that.

Chris Bloomstran:
Anyhow, Bufffet had a high class problem, Berkshire had a really high class, probably 98 and that’s the history of their success. Berkshire had compounded their book value at about 29% per year from when management took over in 1965 up until the end of 1997. And Berkshire stock reflected that success. Then probably 85% of Berkshire was concentrated in insurance. So they had Cs and they had the shoe business and they had the furniture mart, but they hadn’t really bought some of these big durable assets that have come along in the last 20 years. This was still an insurance operation, high-class insurance operation. By then, they already had all of GEICO of course, and National Indemnity. And so, they had this problem and the stock reflected the success. It was trading at three times a book and it wasn’t worth three times book.

Chris Bloomstran:
When we started following the business, when I got interested in it in ’96 when they issued the B shares, right on the front page at the prospective said, neither Charlie nor I think Berkshire is worthy of buying. But of course they issued the B shares to phase out and keep these guys from running what would be certainly an ETF structure in today’s world.

Tobias Carlisle:
Yeah. Folks might not remember, their shares got so expensive that nobody would have wanted it. I don’t remember where they were, but there might’ve been 20,000 but there were these groups that used to buy the shares and then they would issue their own units. It was like a flow through structure with a fee in it. So you could buy the units in the shares for much lower prices five or 10 bucks.

Chris Bloomstran:
Yeah, they tried to do it. I think the shares were probably closer to 40,000 because they wound up eating it a little over 80,000 in 1998 and I think they doubled during that two year period. But whatever it was, you had a state planning problems if you were gifting to your kids and the gift limits then were $10,000 gifts per person. And so what do you do with your A shares? There were no B shares. So Warren and Charlie didn’t want to see somebody coming in and charging 3% for the right to own Berkshire Hathaway per year. And so they headed that off and issued the B shares. And I think they genuinely felt that the stock at that point was probably override. Now they’re always conservative in terms of talking about how well Berkshire can do, you saw it on the meeting on Saturday night, but it was a genius masterstroke. It created the second class of stock.

Chris Bloomstran:
By 98 though, the stock had doubled or whatever it had done from 96 was that expensive. It was three to book. And so the problem was the stock portfolio had grown so large. Like I said earlier, it was about 115% of Berkshire’s total book value, which is amazing. Instead of paying what were then 35% capital gains taxes, corporate tax rate, and selling Coca Cola down and selling Gillette and selling the Washington post, he buys General Reinsurance, which as a classic reinsurance operator business, had the vast majority of its capital invested in bonds. The size of Gen Re, which is where this is really interesting, where it was such a brilliant transaction, picking up Gen Re tripled Berkshire’s float and immediately diversified the stock portfolio from 115% down to I think it was 69%.

Chris Bloomstran:
Berkshire has lamented over the last handful of years, the fact that he gave away Berkshire shares and looked at what was spending, I think it was $20 billion, let’s say for what would have grown to $80 billion 4X growth over a period of time. And I look at it differently. I look at the percentage of the company that Berkshire gave away which was about 17% and they wound up, Gen Re was really a third of the business. They used the stock at three to book when it was worth half that in my opinion. And it was a brilliant transaction. I would contend here, lo these many years later that had they not done that deal, that Berkshire could not have started buying the utility businesses, would not have bought the Railroad in 2009 because the capital was trapped in common stocks that were trading at 45 to 50 times earnings. And if he wasn’t going to pay the capital gains taxes to sell them, he couldn’t have upstreamed enough capital out of the overcapitalized insurance operation to do the deals. And yeah, it was perfect.